Artificial intelligence (AI) has become a buzzword for nearly every company when touting its products and services. What used to be the domain of only a few technology companies is now pervasive in automobiles, drug development, and customer service. But all AI is not created equal.

That’s why I set out to choose the best stocks applying the technology right now. Upstart Holdings (NASDAQ:UPST), The Trade Desk (NASDAQ:TTD), and CrowdStrike (NASDAQ:CRWD) were obvious choices. These companies aren’t just using the technology, they’ve built their businesses around it. And that’s creating differentiated solutions that are powering huge growth and great returns for shareholders. Here’s how they’ve done it and what lies ahead.

Upstart is fast becoming a Wall Street darling. That’ll happen when a stock rises 974% in the first nine months after going public. It’s using AI and machine learning to make better lending decisions. Don’t take management’s word for it. The Consumer Financial Protection Bureau issued the agency’s first No-Action Letter to the company in 2017. It doubled down with another late last year. It’s a one-of-a-kind green light for its AI-based lending product. The agency cited 27% more borrowers having access to credit and 16% lower interest rates.

It’s a win-win for borrowers and lenders. The company now has 150 financial institutions using its AI-enabled product. That said, two of them make up 83% of its transaction volume. It’s trending toward more diversification. But it’s a number investors will want to see decreasing as the business matures.

Growth has been off the charts. Since it went public last December, it has put up quarters of 90% and 1,018% year-over-year revenue growth. That second-quarter comparison was at the depths of the pandemic. But don’t think the easy comparison negates the accomplishment. Management is predicting $750 million for the full year — 221% more than last year.

To top it off, the company is profitable. It has posted $0.63 per share of earnings already this year. That profitable growth should continue for the foreseeable future. The company is branching out from its personal loan business into auto lending. Management believes it’s six times larger than personal loans and perhaps even more inefficient. It’s a recipe for continued growth and profits. And that should be good for shareholders with a long-term horizon.

When someone says AI in advertising, it’s natural to think of promotions in Facebook‘s news feed or Amazon figuring out what to serve up to you next. The industry has advanced far beyond that, and The Trade Desk is leading the charge. Its self-service cloud-based platform helps advertisers manage their ad campaigns from creation through analysis across virtually every digital platform and device.

The platform incorporates AI — when it makes sense and with full transparency — to decide how to set goals and optimize a campaign. It’s helping use data to connect marketing goals and business outcomes — something notoriously difficult in advertising.

Revenue over the past 12 months topped $1 billion. That’s up 56% from 2019. And like Upstart, it’s turning a profit. The company has delivered net income of $263 million over the last year. That number has climbed 144% since the year before the pandemic. The stock has followed suit. It’s up 500% since the beginning of 2019, despite falling more than 45% from its high twice during that span. It’s down nearly 30% from its all-time high now. 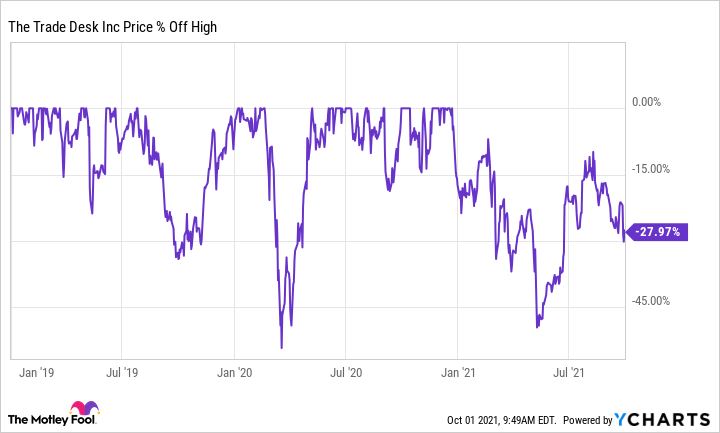 A lot of the volatility is due to the uncertainty surrounding cookies — small blocks of data that a website puts on a user’s computer to track and remember them as a way to personalize content. Alphabet‘s Google announced in January 2020 that it would block third-party cookies. It seemed like it would lead to industry upheaval — especially for The Trade Desk. In the time since, Google has announced it will delay implementation until late 2023.

Still, The Trade Desk has a solution. It already has an approach called Unified iD 2.0. It’s an open source framework using encrypted email addresses. For its part, Google has said it doesn’t plan to support email-based identification. However, with enough support, it may not matter.

Many major advertisers and brands have announced they will adopt UID 2.0, and cloud data platform Snowflake even said it would support it inside its data marketplace. With increasing adoption, The Trade Desk could find itself further entrenched in the digital advertising world — a place long-term shareholders should love.

Moravec’s paradox holds that it is easy for computers to do things that are very hard for humans, but hard for them to do things we find easy. It’s why a computer can make calculations infinitely faster than a person, but can struggle recognizing a face. The same holds for cybersecurity.

CrowdStrike is using machine learning models and behavioral analytics to detect, as well as proactively hunt for, threats to its customers’ networks. Its Falcon platform monitors a trillion signals per day in real time across the entire lifecycle from workstations and servers through cloud networks, mobile, and Internet of Things devices. That’s the stuff we find hard. It does all of this while an internal team of experts uses human judgment to monitor, check, assess, and respond to incidents.

The result is threat protection that keeps getting smarter. It is perpetually incorporating data from each of its customers to bolster its AI and detect threats across its entire customer base. Understandably, it’s led to rapid customer adoption.

For the first six months of this year, the company grew revenue 72% year over year to $641 million. For the full year, it’s projecting revenue of $1.4 billion. Although it loses money according to generally accepted accounting principles (GAAP), it has generated more than $459 million in cash from operations over the past 12 months.

CrowdStrike is a leader in a critical function that is quickly becoming a top priority in many corporate boardrooms. With hypergrowth, deep penetration into customer operations, and a financial profile that signals profitability ahead, it’s one of the best artificial intelligence stocks to add to a portfolio right now.

This article represents the opinion of the writer, who may disagree with the “official” recommendation position of a Motley Fool premium advisory service. We’re motley! Questioning an investing thesis — even one of our own — helps us all think critically about investing and make decisions that help us become smarter, happier, and richer.

First Webb Telescope Pics Will Include Deepest of the Universe

How Much Competition Is There in the Metaverse?