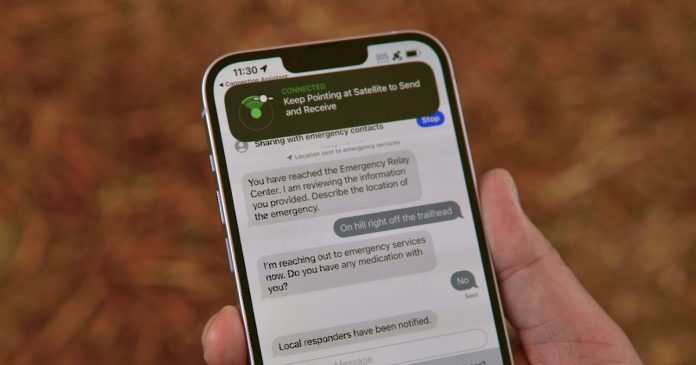 Rescuers in Alaska were able to locate a stranded snowmobiler with the help of Apple’s new Emergency SOS via satellite feature.

According to Alaska State Troopers, the man was traveling via snowmachine from Noorvik to Kotzebue on Alaska’s western coast when he became stranded and activated the feature on his iPhone early Thursday.

Local search and rescue teams sent a group of four volunteer searchers to the Nimiuk Point area. They were able to use the GPS coordinates provided by Apple’s emergency response center to locate the man, troopers say.

The man, who wasn’t injured, was transported to Kotzebue by the search team.

Apple’s Emergency SOS via satellite feature, announced at the company’s September product launch, allows iPhone 14 users to contact emergency services and contacts even when out of cellular range. With a clear view of the sky, messages can be sent via satellite in as little as 15 seconds, Apple said.

The feature is free for the first two years.

Read more: iPhone 14 Emergency SOS: Here’s How I Used a Satellite to Contact 911

Is a Lasting Digital Memorial to a Dead Person Even Possible?

Hamptons house is a sensitive take on a weekend retreat

Dexcom, Insulet in talks to merge into a diabetes device behemoth:...