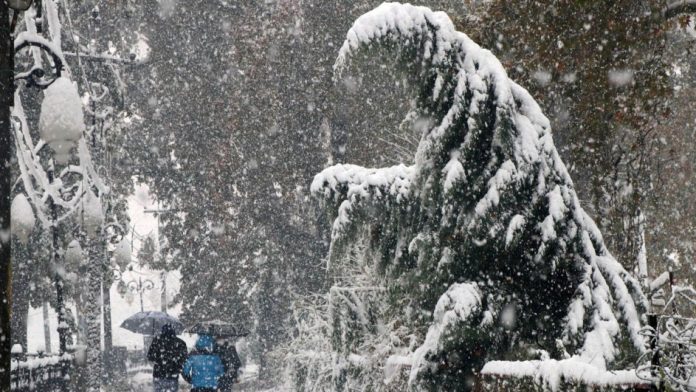 Most of Italy is under the grip of an Arctic polar vortex, bringing with it the coldest weather so far this winter, with most of the Italian peninsula hit by snow, icy rain, hail, and gale-force winds.

It is the first time the country has experienced severe weather this winter, which has led to at least one death and is expected to increase energy consumption amid high energy prices, reports Xinhua news agency.

According to local news reports, a 21-year-old woman died when high winds toppled a tree on a rain-slicked road in Caserta, near Naples, crushing her car.

Meanwhile, the Italian weather site Il Meteo said that heavy rainfall had resulted in rivers overflowing their banks in L’Aquila, the capital of the central region of Abruzzo, and in Salerno, south of Naples.

A major state highway was also closed due to a landslide in Avellino, east of Naples, and property damage was reported in Rome due to heavy rain and hail in parts of the city. Harsh weather forced some coastal cities to restrict access to their ports.

Last year was the warmest in Italy since records began in 1800. The summer months were unusually hot and dry, followed by bouts of heavy rain and wind in the fall and an unseasonably warm start to the winter. Earlier this month, the Italian agricultural union Coldiretti said the warm winter was putting the agrarian sector at risk.

Low winter rainfall has failed to restore water supplies that were emptied last summer, and some plants are blooming early, meaning fruit and flower buds could be damaged during cold spells such as this week.

However, the warm months have been welcomed by energy policymakers looking to avoid severe natural gas shortages.

While Italy’s gas storage networks are mostly full, they could be drained if demand increases due to the need for heating during the cold weather. Increased energy use could also act as an economic drag in Italy since energy prices are currently so high.

According to data released Tuesday by the National Institute of Statistics (ISTAT), energy prices were the main factor in pushing the country’s inflation rate to 8.1% in 2022, the highest level since the introduction of the euro currency in 1999.

Il Meteo said the icy weather lashing the northern part of the country would move south over the coming days, with snowfall expected at altitudes of over 500 metres across Italy. Snow could fall as far south as Calabria and on the southern island of Sicily.

The above article has been published from a wire source with minimal modifications to the headline and text.

Incident on International Space Station was worse than previously thought and...

US Plans to Add 36 Chinese Companies to Trade Blacklist

Opinion | How to Talk About ‘Extreme Weather’ With Your Angry...