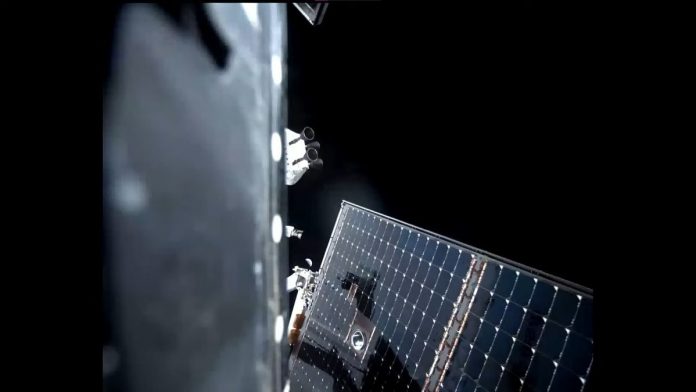 “Orion has had a successful and nominal, 1 minute and 45 second, distant retrograde orbit departure burn,” Vereen announced during the agency’s broadcast of the burn. The spacecraft’s solar panels could be seen gently rocking back and forth on NASA Television’s live broadcast as a “tiny Earth” glowed in the background.

Orion now begins its ten-day trek home. If all goes according to plan, the capsule will splash down in the Pacific Ocean off the coast of California on Dec. 11. NASA and the United States Navy have already begun training for the recovery operation that will mark the end of the Artemis 1 mission.

The mission is the first in the agency’s Artemis program, which is aimed at establishing a sustainable crewed lunar outpost near the moon’s south pole by the end of the decade.

The first Artemis mission was intended as a test for both the SLS vehicle and Orion spacecraft to ensure that both are flightworthy and safe to carry human crews into deep space. If Artemis 1 goes as planned, the next mission, Artemis 2, will launch astronauts into orbit around the moon in 2024. NASA will then return astronauts to the moon no earlier than 2025 with Artemis 3.

So far, Artemis 1 has met its benchmarks, according to NASA. Mission managers announced on Wednesday (Nov. 30) that the Nov. 16 launch of SLS showed the vehicle performed exactly as intended.

“The first launch of the Space Launch System rocket was simply eye-watering,” Artemis mission manager Mike Sarafin said. “While our mission with Orion is still underway and we continue to learn over the course of our flight, the rocket’s systems performed as designed and as expected in every case,” he added.

Orion, meanwhile, has been likewise performing wonderfully by all indications. A major milestone, the spacecraft’s insertion into a distant retrograde orbit around the moon, was achieved on Nov. 25.

With today’s burn, Orion now has a long and lonely journey home, and will no doubt be sending home gorgeous images and footage as it has throughout its flight so far.

Find Out if You’re at Risk for Alzheimer’s Like Chris Hemsworth,...

Exploring the Metaverse with an eye on design

Why California will escape ‘bomb cyclone’ while rest of US freezes

HLN Live Programming To End As Part Of CNN’ As Part...

NASA DART spacecraft will slam into an asteroid in September