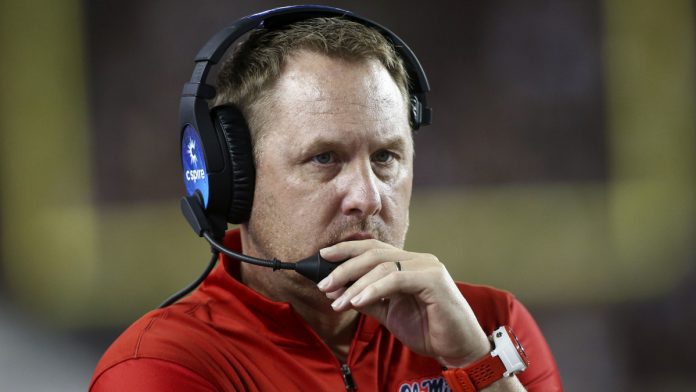 In the past few days since reports of Auburn’s hiring of Hugh Freeze began to surface, the football coach’s past transgressions have returned to the forefront, from NCAA violations under his watch at Ole Miss to his social media use. The overall reaction was part of the pushback to Freeze’s hire on social media and in the email inboxes of athletic director John Cohen, school president Chris Roberts and other Auburn board of trustees members.

Fans expressed dismay about Freeze’s candidacy on multiple fronts. Some reacted to Freeze’s responses to tweets posted by a student who sued Liberty, Freeze’s previous employer, for its inaction regarding sexual assault allegations before Freeze got there. Other fans were disturbed by additional scandals that have followed Freeze in the past.

Incidents go back to the late 1990s, when three women who were students at Briarcrest Christian School in Memphis told USA Today in 2017 that Freeze made them feel uncomfortable with inappropriate behavior. That year, the coach was forced to resign from Mississippi after an internal investigation found “a concerning pattern” of calls to escort services on his school-issued cellphone. When the program was under investigation for NCAA violations, Freeze and others at the school tried to spin the situation to recruits and media as primarily an issue involving other sports or his predecessor, Houston Nutt. When the lengthy NCAA notice of allegations came out, that turned out to be false: The violations yielded a two-year postseason ban and major recruiting restrictions.

Freeze was asked about the response to his hiring at an introductory press conference Tuesday, when Cohen was not made available for questions and gave only a short prepared statement introducing Freeze.

“I really don’t know the magnitude of the backlash because, believe it or not, I just hadn’t been on any social media in the last three or four weeks,” Freeze said. “I have an account, but somebody else has been running it, so I really don’t know.”

This past weekend, however, when reports around Auburn hiring Freeze increased, a tweet from a former Liberty University student put Freeze’s Twitter use into the spotlight.

Chelsea Andrews, one of the 22 students who sued Liberty in 2021 for its inaction regarding sexual assault allegations, has been vocal on Twitter both while the lawsuit was pending and after it was settled in May. One of the arguments from Andrews and the complainants was that the private school’s institutional policies created a culture that perpetuated sexual violence, which had a chilling effect on the women who reported it.

In screenshots shown to Sports Illustrated, Freeze direct-messaged Andrews three times while he coached at Liberty—twice while the lawsuit was active, and another after it was settled. Each message came shortly after she either tweeted directly at the coach or mentioned him by name without tagging him.

Andrews says she told her lawyer at the time and was advised not to answer the messages. She also decided to stop tagging Freeze in tweets.

“It felt, at the time, intimidating,” Andrews says. “Why is he doing this? Leave me alone. You don’t get to intimidate me out of the experience that I know.”

According to sources close to the Auburn coaching search, Freeze agreed to relinquish control of his social media accounts. When specifically asked about this at Tuesday’s press conference, Freeze said, “That’s not accurate. How could you in this day and age? There may be wisdom in that, though.”

When asked later Tuesday to clarify his comments regarding who has access to his social media, Freeze said in a statement to SI: “I have to focus on a lot more important things at Auburn than social media. Like most coaches, I welcome the extra help from our [support staff] team, to work alongside me, to build this great program. Plus, I’m not great at making graphics.”

SI also asked for a response around Freeze’s direct messages to Andrews. An Auburn spokesperson denied SI’s requests, only to point to a comment the coach gave to ESPN late Tuesday: “I learned from this situation that I should totally understand other people’s circumstances first before communicating or commenting on someone’s situation. It was an inadvertent misstep with no ill intent, and I am sorry.”

The majority of college head coaches use Twitter, via public accounts or private “burner handles,” to monitor news, what people say about them, and players and recruits. It is also customary for schools’ in-house social media departments to have access to a coach’s accounts to tweet recruiting graphics or hashtags when a player commits. In the past, Freeze has been known to heavily use Twitter to send messages, whether in dealings with fans, detractors or reporters.

“This was the office joke,” a former Freeze staffer says. “We all knew that he did this. We would always joke about anytime he was on his phone, he was probably on his Twitter, name searching. This is not some secret in the college football world. This is what he does.”

As is the case when most coaches are initially hired, Freeze does not have a full signed contract, but rather a memorandum of understanding (MOU), a document that allows him to work on behalf of the university without a full contract. When that full contract is signed, it could include guardrails around various actions, including social media use, in order to protect the university.

Such clauses are not rare. Coach Mark Stoops’s original contract with Kentucky allows for termination with cause for “acts of misconduct including, but not limited to, conviction of a felony,” in addition to violation of university policies or NCAA bylaws. Eli Drinkwitz’s deal at Missouri says he cannot “… make statements to the media or in any public forum that is clearly contrary to public convention and morals, or commit any act that may foreseeably bring Coach or the university into public contempt, scorn or ridicule, or that seriously offends public morals or decency as a result of such conduct or act.”

While it may seem overprotective for a football coach to have to agree to a clause that stipulates social media use, Freeze will be one of the highest-paid public employees in the state of Alabama (his salary is over $6.5 million) and arguably Auburn University’s highest-profile front-facing ambassador.

Reporting from Sports Illustrated’s Pat Forde and Ross Dellenger was used in this story.

Finland in the World Press