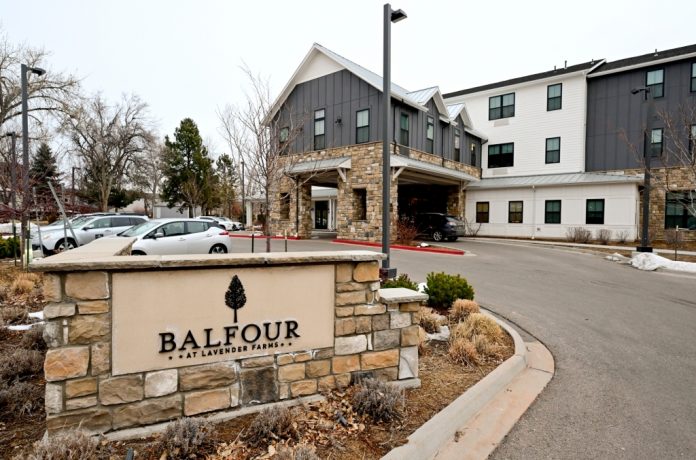 The temperature sat around 15 degrees when a 97-year-old resident of the Balfour at Lavendar Farms senior living facility in Louisville walked out of the building last year in the middle of the night wearing a nightgown, robe, boots and gloves.

When the door locked shut behind Mary Jo Staub, she used her walker to navigate the sidewalk until she ran into a 5-foot snowbank. There, she ditched the walker, climbed over the snow and crawled 75 feet on her hands and knees to a pair of French doors adjacent to a nurses’ station.

But no one in the building ever saw Staub outside. They never heard her screams or her banging on the windows, according to an investigation conducted by the Colorado Department of Public Health and Environment and a newly filed lawsuit.

Staub froze to death on the sidewalk in the predawn hours of Feb. 26.

The felonious killing allegation, if found true by a jury, would eliminate any caps on financial penalties awarded to Staub’s family — and there does not need to be a criminal charge filed in connection with the death for a jury in a civil trial to determine there was a felonious killing, the complaint states.

The lawsuit, filed by the Hailey Hart law firm in Denver, asks for an unspecified amount in damages.

Staub’s death 11 months ago prompted multiple investigations by government agencies, including the Louisville Police Department, which did not file criminal charges against any members of the staff on duty the night the woman died.

The Colorado Department of Public Health and Environment, which regulates nursing homes, did not find Balfour violated any state regulations in relation to Staub’s death.

However, the agency’s investigation found that Balfour failed to train staff on where they could quickly find a resident’s advance directives. Staub had a “do not resuscitate” document, but since no one on duty knew about it, paramedics attempted CPR when they arrived, the lawsuit said.

Records do not show that Balfour paid any fines associated with the investigation, but the health department’s report said staff has since been trained on where to find the documents.

The Colorado Department of Regulatory Agencies, which licenses nurses and nursing home administrators, has no records of disciplinary action against either of the employees on duty the night of her death.

But Lee Rasizer, an agency spokesman, would not confirm or deny the existence of a case or investigation into at least one Balfour employee who worked with Staub. That employee is not named as a defendant in the lawsuit but her name is repeatedly mentioned in it as someone who worked closely with the resident and her family.

Michelle Sepples, Balfour’s executive director, said she was not authorized to comment on the lawsuit or Staub’s death.

Staub moved into Balfour at Lavender Farms in 2019, shortly after the senior living center opened, the lawsuit states. The lawsuit does not specify how much she and her family were paying for her assisted living apartment, but it says they were paying an additional $1,500 per month for Level II care, which provides more daily assistance. The company’s website says “apartment homes start at $7,500 per month.”

Staub’s family and medical providers knew that she suffered from confusion and needed to be monitored at night for sleepwalking, the lawsuit said. But the state health department’s investigative report said she was not listed as a risk for wandering. She also required oxygen.

On Feb. 25, Staub was confused and hallucinating that people in her room were hissing at her and using sign language to communicate with her. She was scared and asked an employee to check her apartment for strangers. The employee assured Staub no one was in the apartment and escorted her to bed, the lawsuit states.

When an employee checked on Staub at 10:16 p.m., she was asleep, according to staff reports cited by the lawsuit and the health department.

But sometime between the last check and 12:40 a.m. — when security cameras first recorded her outside the nurses’ station — Staub had wandered outside.

“The surveillance shows she was exhausted, terrified and literally freezing,” the lawsuit states. “No one at Lavender Farms visited or walked to or past the nurses’ station or French doors between 12:18 a.m. and 5:51 a.m. No one at Lavender Farms was monitoring the security cameras that night. Not a single Balfour employee noticed Mary Jo was locked out of the facility. Not a single Balfour employee was present to help Mary Jo in any way. The Lavender Farms nurses’ station was empty for over five hours.”

The lawsuit says video footage recorded her collapsing outside at 1:40 a.m. and showed some movement until 4:23 a.m. A staff member found her body at 5:51 a.m., state health department records show.

That same night, a second resident, who was not identified, also wandered around Lavender Farms in the wee hours, eventually going outside at 4:40 a.m., the lawsuit states. She exited through the main doors, which also locked behind her. But that resident was able to get back inside a vestibule where surveillance footage shows her ringing a doorbell and pacing around the building’s exterior until 5:47 a.m., when a staff member finally saw her.

The Staub family did not want to comment because of pending litigation, but in a statement on the family’s behalf, their attorney Elizabeth Hart wrote, “Mary Jo was deeply loved. Her life was tragically cut short. Assisted living facilities are supposed to provide protective oversight for our elderly loved ones. The Staub family wants to ensure this doesn’t happen to any other member of this vulnerable population.”

Get more Colorado news by signing up for our daily Your Morning Dozen email newsletter.

What are the odds of seeing possible meteor shower “storm” in...

The Bored Ape NFT craze is all about ego and money,...

Why is it so hazy and smoky in North Texas?