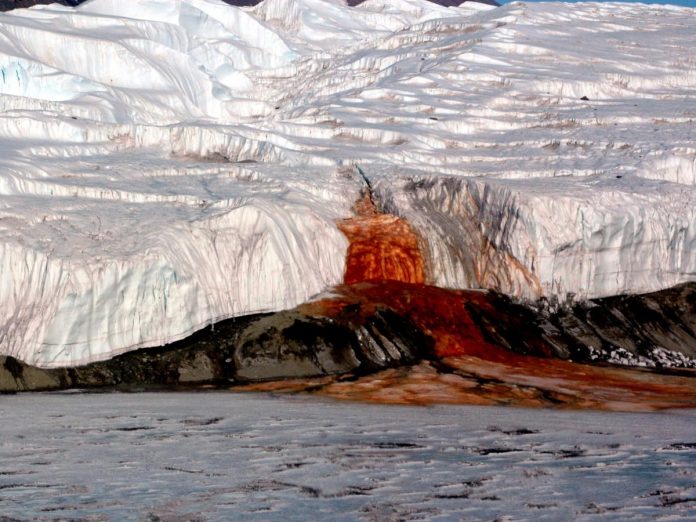 A large glacier in Antarctica produces a bright red river that oozes out of the ice, aptly named Blood Falls. Why the reddish water pours out of Antarctica’s Taylor Glacier and into Lake Bonney puzzled scientists for decades.

The phenomenon was first discovered by geologist Griffith Taylor in 1911. At the time, he thought that red algae living in the water was responsible for the water’s striking red hue.

More than a century later, scientists found what causes the bloody river: iron salts seeping out of the ice that turn red when they make contact with the air.

In a 2017 study, scientists found that Taylor Glacier formed roughly 2 million years ago, trapping a saltwater lake under it. Millions of years later, the ancient lake has reached the edge of the glacier, squeezing out salt water.

In a 2015 study, researchers found a network of rivers flowing through cracks in the glacier using ice-penetrating radar. That means liquid water can exist inside an extremely cold glacier.

“While it sounds counterintuitive, water releases heat as it freezes, and that heat warms the surrounding colder ice,” Erin Pettit, a glaciologist at University of Alaska Fairbanks and co-author of the 2017 study, said in a press release. “The heat and the lower freezing temperature of salty water make liquid movement possible. Taylor Glacier is now the coldest known glacier to have persistently flowing water.”

In a 2009 study, researchers discovered that the underwater lake is home to unique inhabitants — a community of microbes that can survive extreme conditions, with no light or oxygen. Instead, they use iron and sulfate to survive.

Researchers believe the lake trapped beneath the glacier millions of years ago was full of microbes.

“Among the big questions here are ‘how does an ecosystem function below glaciers?’, ‘How are they able to persist below hundreds of meters of ice and live in permanently cold and dark conditions for extended periods of time, in the case of Blood Falls, over millions of years?,” Jill Mikucki, a microbiologist and the study’s lead author, said in a press release.

Scientists believe studying these microbes will be a boon for astrobiology. They can shed light on how life might survive in other worlds with similar bodies of frozen water, like Earth’s neighbor — Mars.

Here’s how Apple could pull off the notch-free display on the...

Cryptocurrencies bounce back from China crackdown

Extreme heat that put 150M in the US under warnings, killed...

Black holes: Nothing can escape these regions in space