Osler Diagnostics is planning to raise more funds as the Oxford university spinout prepares to launch its first blood-testing device, in an industry tarnished by its most famous forerunner: Theranos.

The diagnostics start-up, co-founded by 27-year-old Connor Campbell, who attended but did not finish medical school, has already raised $100mn in the five years since its launch.

While the group is named after famed 19th-century diagnostician Sir William Osler, its tabletop device has a sleek iPad-like interface.

Campbell hopes the portable diagnostic will transform healthcare by offering a range of fast, cheap tests outside the laboratory, sometimes from just a few drops of blood.

But he is keen to stress that any comparison with Theranos, the Silicon Valley start-up whose co-founder Elizabeth Holmes was recently convicted of fraud, stops there.

“Theranos started from an idea of Elizabeth Holmes. We started based on decades of research from Oxford university from the most successful departments in the history of diagnostics,” he said.

“They built an organisation that was led by board members who were diplomats, lawyers or generals. We’ve got an organisation filled with experts in their field led by some of the biggest leaders in global diagnostics, global pharma and global life sciences.”

Campbell co-founded Osler with Jason Davis, a chemistry professor at Oxford, where the portable electrochemical blood glucose sensor was created.

Campbell left his medicine course at Oxford after three years to go into business. He ended up working with McKinsey in Sierra Leone at the end of the Ebola crisis, where he saw first-hand the importance of diagnostics.

“To take an extreme example, if you don’t know who’s dying of what, where do you send healthcare resources? What resources do you send?” he said.

He says the pandemic has “hammered home” the point that diagnostics are vital to changing healthcare.

Osler is starting by seeking approval for two critical cardiac tests but hopes its breadth will help it outcompete existing point-of-care diagnostics. Campbell said the device can already conduct a far wider range of tests, including diagnosing infectious diseases. It processes most tests in about 10 minutes. 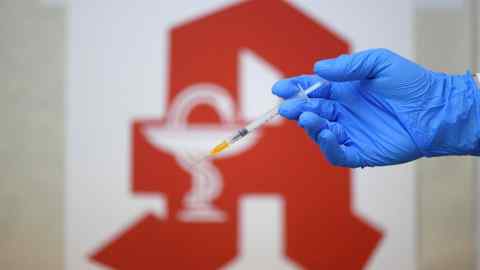 Wearing a white coat over his black Osler-branded T-shirt, Campbell demonstrates the machine in a lab.

Blood samples — collected from a finger with a pinprick or from a vein with a conventional needle — are added into cartridges with all of the reagents necessary to perform a specific test or panel of tests. Inside the machine, the blood is manipulated to prepare the sample, and then presented to a biosensor, which translates a biochemical reaction into measurable data.

Osler will have to prove to regulators through clinical studies that it is substantially equivalent to far larger lab machines.

The company has yet to publish papers on its work in scientific journals, although it has patented innovations at every stage of the process.

Roland Diggelmann, chief executive of device maker Smith & Nephew, who previously led diagnostics for Roche, does not see the lack of publications as a weakness, arguing it is normal for a diagnostics maker to wait until it is applying for regulatory approval to publish.

Diggelmann, who has no financial relationship with Osler, said its technology was “promising” and pointed to the company’s “strong academic background” and ambition to build a large menu of tests.

“The Osler approach is that they basically want to do everything in one device. That is what nobody has been able to crack. That’s a big challenge. They believe they can do this and there is a chance that they can. There is still a lot of work required,” he said.

Despite the long shadow of Theranos, investors are pouring money into companies that promise to revolutionise blood testing.

Osler raised a series B funding of $50mn at the start of last year, led by Oxford Science Enterprises and Bravos Capital. It will begin a series C fundraising shortly. Its investors include business leaders Charles Dunstone, co-founder of Carphone Warehouse, Irish financier Dermot Desmond, and British billionaire Michael Spencer.

What Is DLSS 3, and Can You Use It on Existing Hardware?

NASA will pay 4 people to spend a year pretending they...

In the global chips arms race, Europe makes its move