The Japan Aerospace Exploration Agency (JAXA) astronaut Soichi Noguchi returns to Earth on Russia’s Soyuz spacecraft in 2010 after having spent 163 days in space. Dr. Noguci has speculated that perhaps he might get to fly on SpaceX’s first leisurely mission to the Moon, dubbed #dearMoon, funded by Japanese billionaire Yusaku Maezawa. Image: Mikhail Metzel/Reuters

Blue Origin, who lost NASA’s award for the agency’s Human Landing System (HLS) intended to land astronauts on the Moon, posted a new graphic on its website today, which continued its narrative of describing SpaceX’s mission concept as intensely complicated. However, in describing the sequence of operations, the company has inadvertently described a mission with fourteen SpaceX fuel tankers orbiting the Earth to enable the company’s Starship lunar lander to make the lunar journey.

When NASA made the award, the agency did not reveal the precise nature of SpaceX’s planned operations. For the HLS proposal, the company had proposed its Starship next-generation launch vehicle system, which is currently under development at its facilities in Boca Chica, Texas. Starship is a two-stage vehicle, and SpaceX will customize its second or upper stage to meet the NASA requirements.

The details of the Starship plans were partly revealed in an extensive report by the United States Government Accountability Office (GAO) earlier this week. The revelations surfaced as the GAO’s report highlighted proposals by Blue, SpaceX and Dynetics – the third HLS bidder. It also ruled that NASA’s contract award process was fair and followed the rules laid down by the agency at the time of the contract proposal solicitation. 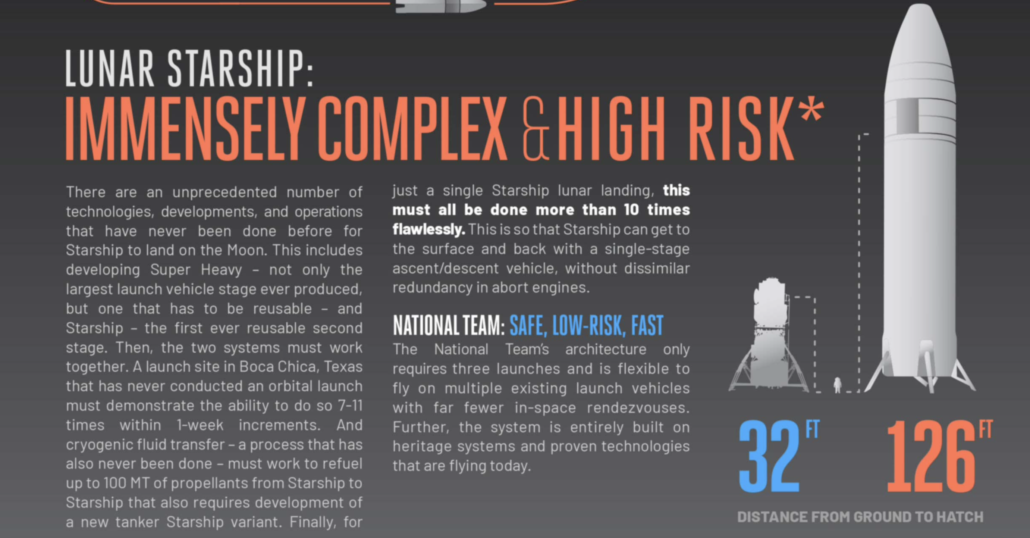 A portion from a graphic posted earlier on Blue Origin’s website highlighted that Starship is extremely dangerous to use and far more complicated than its Integrated Landing Vehicle (ILV). Image: Blue Origin

Before the GAO’s report was made public, Blue Origin shared a graphic (shown above) on its website detailing that SpaceX’s mission profile would require more than ten lanches to fuel the lunar Starship for its journey.

However, as soon as the report became public, the company first released a statement criticizing the total of 16 launches required to send the lunar Starship to the Moon. According to the GAO, 14 of these will launch fuel tanker variants of the spacecraft, one will launch an unspecified object, and one will launch the HLS Starship.

The unknown object is believed to be a fuel depot orbiting the Earth, which the tankers will fill as they launch. Blue’s updated graphic shared today on its website specifically mentions a fuel depot and chronologically lists down the Starship launches required for the lunar mission. 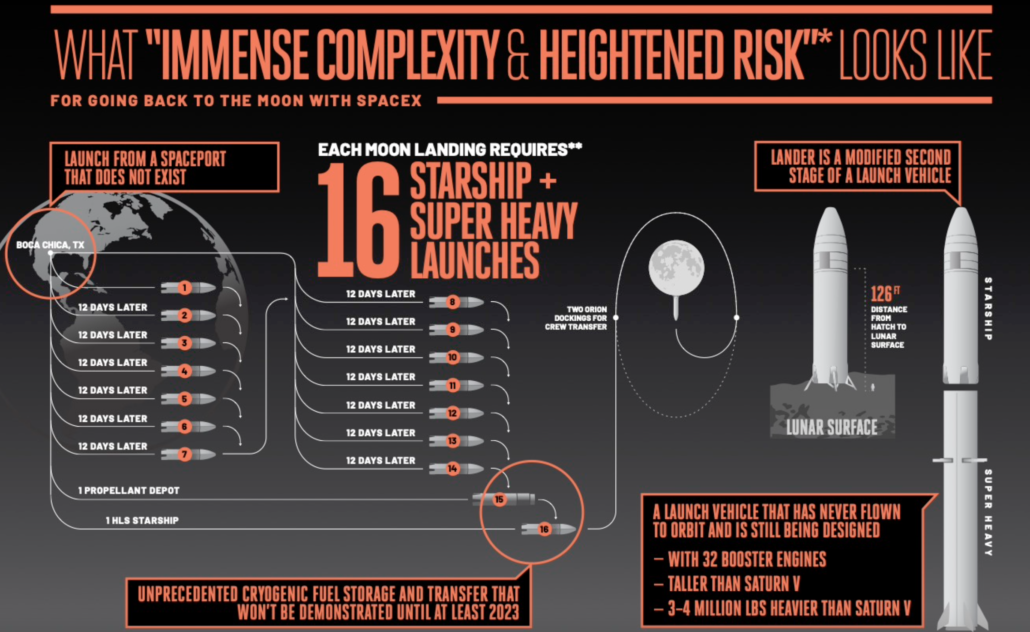 While there are multiple ways to interpret this (and most graphics), the simplest interpretation would assume that the numbered launches represent Blue, listing them down chronologically. If this is true, and it most likely is, since the lunar Starship variant will be the last vehicle to launch (a detail which follows the numbered representation in the graphic above), then Blue believes that SpaceX will put fourteen Starship tankers in orbit before launching the purported fuel depot.

A more logical sequence of operations, perhaps also insinuated by the GAO’s statement shared below, would be SpaceX launching the ‘depot’ first and then launching the fourteen tankers to fill it up before finally launching the lunar Starship to fuel it for the Moon mission.

In its report, the GAO described SpaceX’s operational concept as:

. . . .SpaceX’s concept of operations contemplated sixteen total launches, consisting of:
1 launch of its [DELETED]; 14 launches of its Tanker Starships to supply fuel to [DELETED]; and 1 launch of its HLS Lander Starship, which would be [DELETED] and then travel to the Moon.

Looking at the description above, which is repeated later in the document, it’s clear that SpaceX will first launch the alleged fuel depot and then fill it up with propellants before launching the Starship lunar spacecraft.

In response to Blue Origin’s earlier criticism, SpaceX chief Mr. Elon Musk outlined that his company might need only four tanker launches to fuel the lunar Starship. The executive shared that the lunar variant is lighter than the primary variant because it does not feature flaps for aerodynamic control or a heat shield to absorb the stresses of entering an atmosphere.

SpaceX has designed Starship to ferry humans to Mars eventually, and the Martian variant carries both features to make reentry survivable for the vehicle and its crew. If Musk turns out to be right, and the lunar Starship requires only four tanker launches, then a potential depot might provide NASA with the ability to carry more missions to the Moon than originally envisioned.

While the crewed missions depend on The Boeing Company’s Orion spacecraft to take the astronauts to a new lunar space station, from where they board Starship to land on the Moon, Starship will be able to ferry cargo to the Moon without requiring Boeing’s spacecraft. This will provide the space agency greater leeway, especially in emergencies, to quickly provide the astronauts on the Moon with supplies or replenishments.

Reports: Time running out for Binotto at Ferrari

Texas Power Use Soars to All-Time High for Ninth Time This...

Anaheim accepting rental assistance applications again — but from landlords only...

This Robot has Taken its First Baby Step with Zero Computer...