After the one-two punch of The Book of Boba Fett and Obi-Wan Kenobi, both interminable exercises in “WHY, GOD?!”, my excitement level for Andor was practically non-existent. Granted, it put out a pretty slick trailer with actual location shots, but I’ve been burned before.

So imagine my surprise when the first episode of Andor turned out to be pretty darn great, which is particularly amazing because I am not the biggest Rogue One fan. Don’t get me wrong, I don’t hate it. It’s a solid flick. In fact, the last 40 minutes is one of the very rare times where I was actually glad to see a movie in the theater. I’m just not big on the people who say it’s the only good thing that Disney has done with the franchise, but I’ll (maybe) expand on that later. Right now, I still have two more episodes of Andor to get through because some jerkwad decided to drop three of these at once. I have kids, you dick!

Anyway, if you’re looking for a different take on Star Wars than what The Mandalorian or Obi-Wan brought to the table, I can safely tell you that Andor delivers. This is richly detailed, cinematic story-telling filmed on real sets. We’re talking quality dialog with actual line deliveries, Mr. Frodo. Curmudgeonly British guys saying they can’t be buggered to investigate space murder, Dickensian class struggles, intergalactic hookers, and a little droid who will steal your heart. It’s (so far) a neat little show that I haven’t been able to stop thinking about, and I’ve only watched one jarringly abbreviated episode. 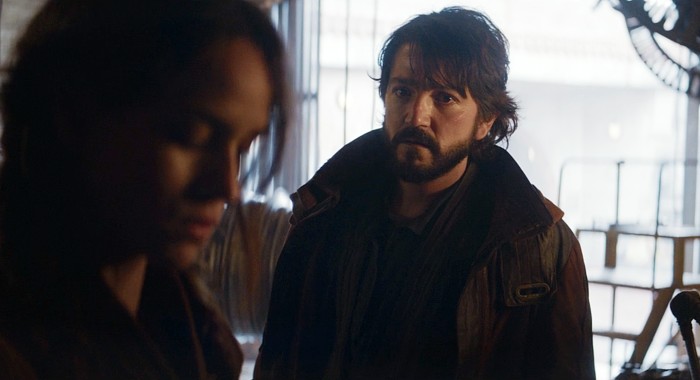 Episode 1: The One With the Dick Rocket

Differentiating itself right out of the gate with some heavy Blade Runner vibes, Andor opens with Luna’s title character making his way through the corporate zone on Morlana-One. Instantly, we’re treated to camera angles, honest to freaking God camera angles, which is just one of the many benefits of not shooting inside an LED capsule while Jon Favreau eats a sandwich. As if that wasn’t enough, Cassian’s very first stop is a brothel because this Star Wars show wants you to know that it f*cks. Or at least people f*ck off-camera, but still, pretty damn saucy for a franchise whose only topless scene involves Adam Driver wearing pants up to his nips.

After some banter that’s easily light years beyond any of the dialog we’ve seen in the last five years, it becomes clear that Cassian’s looking for his sister who’s some sort of space hooker in case you didn’t know this is a Star Wars show for ADULTS. That’s suggestive content, Kyle! We also learn that Cassian and his sister are Kenari, which means jackshit at the moment, but put a pin in that because we’re going to wrangle with some rich character development before this thing is done.

With his trip to the sex bar a bust, Cassian makes a beeline to his ship to get the hell out of Dodge, but not before getting held up by two corporate sentry guards he pissed off back in the Intergalactic House of Slapcakes. Mirroring the opening to Rogue One, these dudes end up getting murdered by Cassian, but with less ruthless efficiency. Our boy isn’t a stone-cold killer yet, but he ain’t far off.

Cut to the planet Ferrix, where giant space rats pee on a rectangular little robot, B2EMO, who will apparently be a predecessor for Alan Tudyk’s sassy K-2S0. As his droid companion gets a random golden shower — Goddamn, I love this show — Cassian dreams of his childhood while resting in his small scrap hut. In the flashback, he and his sister appear to be part of some quasi-primitive, Lord of the Flies-type clan of kids that doesn’t speak Basic. (For people who get laid, that’s Star Wars for English.) Presumably, these are the Kenari, nestled along the river bank of an unnamed planet. However, their peaceful embankment is soon captivated by an explosion in the sky, and what is absolutely a dick-shaped rocket careening across the sky.

Seriously, look at this thing. I know Andor is going to tackle the class struggles that prop up the Empire, so if this wasn’t a brilliant jab at Jeff Bezos, I would lie and tell people it was. 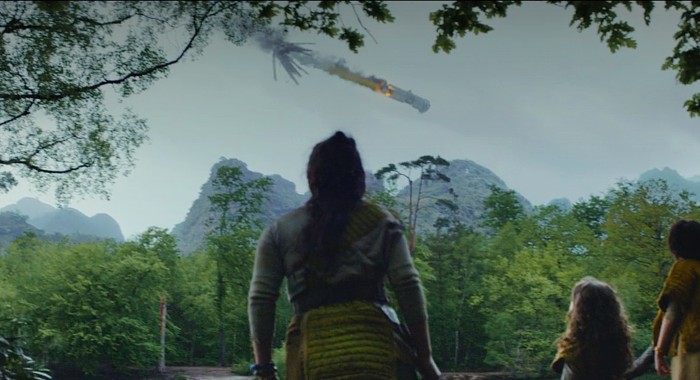 Cassian’s flashback is ended as his sister repeatedly yells “Kassa, Kassa,” which is apparently his birth name. Meanwhile, in the real world, Piss-Bot (h/t Tori) is attempting to wake its master by repeatedly saying, “Cassian, Cassian.” What follows next is a cute little back and forth as Cassian asks if Mr. Peebody can lie for him, which apparently takes up a considerable amount of his battery power. Droids, amirite? In a nutshell, Cassian wants to make it look like he never left the planet and murdered two dudes outside the Bada-Bing But In Space.

Speaking of, back on, uh — *scrolls up* — Morlana-One, a young inspector guy who’s so into his job he tailors his own uniform is learning about the murders by his superior. (Much like Piss-Bot or anyone not named Cassian Andor, I had to look at IMDb to learn these characters are Syril and Chief Hyne, respectively.) However, Syril is not being tasked with solving the crime. Instead, he’s told to come up with a sympathetic, but not too engaging cover story that doesn’t raise any eyebrows about how an intruder, which shouldn’t have happened, managed to visit a brothel, which is illegal and should have been shut down. Syril clearly isn’t thrilled with these instructions. He didn’t hem his space shirt to not solve space crimes.

Rightfully concerned with being wanted for murder, Cassian continues to cover his tracks on Ferrix. He instructs a friend named Brasso to say they were drinking the whole night before heading off to what looks like some sort of podracing garage, marking the very first and literally only reference to the wider Star Wars universe if I’m even right. Self-contained story-telling, baby! Here’s where we meet Bix (Adria Arjona), who I honestly thought was named Biggs until, again, I hit IMDb. This whole scene was probably my biggest quibble with the show because the two practically whispered their lines, and I caught maybe half of what they’re saying. Basically, Cassian has some super valuable Imperial ship part that he wants to sell to one of Bix’s contacts so he can disappear and not get arrested for space murder. She reluctantly agrees much to the chagrin of her snooping boyfriend who, like most men, would prefer Diego Luna to stay far away from their lady’s loins.

Diego Luna understood the assignment when it came time to pick an IMDb photo, and that assignment was sexy space Jesus (Move down the bench, Obi-Wan) pic.twitter.com/dvtmyMf26j

Back on… Mulva-One? (Was I close?) Syril is taking advantage of Chief Hyne’s absence by investigating the shit out of the murdered brothel bros. He’s absolutely not letting this thing go and seems to be aware that an intruder was searching for a Kenari girl. Probably not great. Through this scene, we also learn that the company is hesitant about contacting the Kenari because they “do things their own way.” WTF does that mean?

As Bix reaches out to her contact through some weirdly convoluted communication center, Cassian is removing the data pad from the ship he used for the Gunfight at the O-Face Corral. He’s stopped by some guy he owes a considerable amount of money, which is becoming a recurring theme in this episode. Our boy’s finances are a wreck, but if all goes to plan, he’ll be blowing this popsicle stand.

Flashback to Cassian’s childhood, and he’s preparing to go investigate the crashed dick rocket with the older children. His sister, however, has to stay behind at the camp, and she seems understandably concerned that “Kassa” is leaving her. As she calls to him while he’s getting ready to head out, Kassa slowly turns to her, and I swear on the life of my kids, the episode just ends. It snaps right to the credits in the most random episode ending I’ve ever seen in my life. I shit you not, everything completely stops.

‘I’ve Never Seen Anything Like This’: Possible Tornado Destroys Half Of...

“This is devastating:” Community members react to wildfire in Wooldridge, Mo