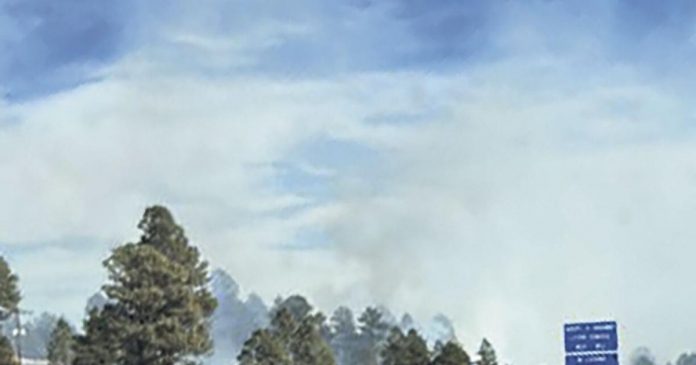 National Weather Service officials confirmed Tuesday afternoon that a grass fire has broken out on the eastern fringe of the Hermits Peak/Calf Canyon Wildfire burn scar in Mora County, prompting concerns that another wildfire could begin.

As of 1 p.m. Tuesday, Mora County Sheriff’s Office officials confirmed there was an active fire north of Mora that had grown to 5-10 acres. A National Weather Service official told the Optic the fire began as a result of a downed power line in the area.

Winds in the area are gusting up to 50 miles per hour, prompting concerns about the fire.

Crews are on scene working to get the fire under control, and Highway 434 in Mora County has been shut down in both directions at mile marker 2 due to the proximity of the fire to the highway.

Shortly after posting its original update on the fire situation, the National Weather Service edited its post, removing the term “hot spots” and instead referring to the activity as “a potential fire signature.”

This is a developing situation, and updates will be provided as they become available.

California’s dilemma: How do you harness an epic amount of rain...