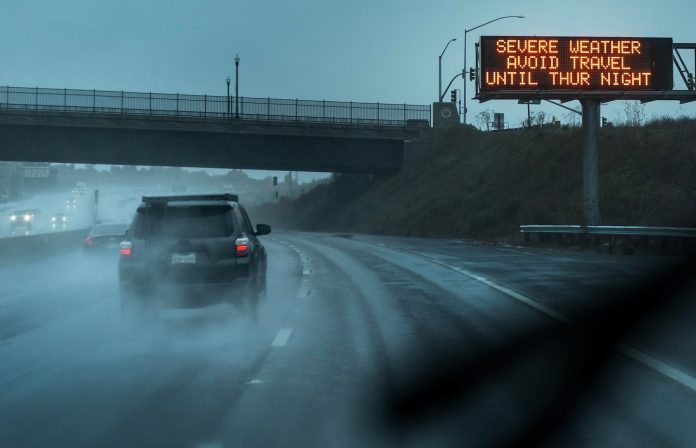 One month ago, California’s Sonoma County came closer than ever to a water crisis: the level of its primary reservoir sunk to an all-time low after three taxing years of severe drought.

This week, as a parade of atmospheric rivers bringing torrents of rain pummels much of the state, the county in the heart of wine country is grappling with the opposite problem: too much water, way too fast.

But even in a time of abundance, when Lake Sonoma is slowly refilling and the Russian River could soon spill its banks, water managers and scientists are not ready to declare an end to the drought.

“We had such a big hole to dig out of to begin this,” said Grant Davis, Sonoma Water’s general manager, as rain soaked Santa Rosa, the county seat. “We are as water managers dealing with something we call weather whiplash — that means extremes on the dry end and extremes on the wet end.”

Even though California has improved its water management system in recent years, it wasn’t built to cope with such intense storms, experts say. Even if every drop can be captured and stored in a reservoir, it will take a lot more rainfall to erase the state’s years-long water deficit. And rain is just one part of the equation.

“We are in a flood emergency while we still have an active drought emergency,” Karla Nemeth, the director of California’s Department of Water Resources, said in an interview. “That pretty much says it all about the new normal we have with climate change.”

Human greenhouse gas emissions, mostly from burning fossil fuels, have increased California’s average air temperatures by about 2.5 degrees Fahrenheit, according to the state Environmental Protection Agency. These warmer conditions increase water evaporation from vegetation and soil and deplete the mountain snowpack the state relies on for 30 percent of its water storage.

According to the U.S. Drought Monitor, there hasn’t been a week when some part of California wasn’t abnormally dry or worse since 2011. Last year was exceptionally bad: Wells were parched, and cities became dependent on bottled water as the state saw its second-driest year on record.

“We’re starting off from a position of a really severe deficit,” said Noah Diffenbaugh, a climate scientist at Stanford’s Doerr School of Sustainability. “If you don’t get paid for several months, and then your employer gives you one normal monthly paycheck, most people are not going to feel their bank account is back to normal.”

When rain does fall, climate change has made it much more intense and destructive, studies show — and in turn, harder for water systems to absorb. The atmosphere holds 7 percent more moisture for every degree Celsius increase in temperature, which means any given storm will be much wetter in a warmer world.

If forecasts for the next two weeks hold up, 22 trillion gallons of water could fall on California in the next 15 days, according to meteorologist Michael Snyder’s calculations. That’s enough to fill Lake Mead more than twice over.

“We’re now in a climate where we’re much more likely to have severe water deficits punctuated by wet conditions,” Diffenbaugh said.

Rising temperatures mean more of that precipitation falls as rain instead of snow. Rather than accumulating on mountain peaks, where it will gradually melt into waterways and ecosystems, the water is immediately flushed into rivers and streams. This can overwhelm water systems that weren’t designed to handle such sporadic, severe rainfall, Diffenbaugh said. In a 2019 study in the journal Water Resources Research, he and his colleagues found that flood risk becomes exponentially worse as precipitation shifts from snow to rain.

In California this week, the downpours have soaked soils and caused drought-stressed trees to collapse. Officials fear that landscapes recently scorched by fire may melt into soggy debris flows. Water managers who were once worried about critically low reservoirs are now contemplating releases to stave off dangerous floods.

Though dangerous, the recent spate of storms has helped ease the state’s long-running water shortages.

The Sierra Nevada snowpack is almost 180 percent of its normal volume for this point in the season — the highest level in 10 years. Scientists are hoping California’s weather doesn’t warm up too quickly in the months ahead. That would allow the snow to slowly melt and trickle down to communities into the summer.

As of Jan. 3, the U.S. Drought Monitor classified the entire state as “abnormally dry.” California’s more than 200 reservoirs are about 33 percent below their historic average levels. Monitoring wells show that the state’s underground aquifers, which account for more than half of the state’s water supply during drought years, contain just two-thirds of their normal amount of water.

Now, some parts of the state are seeing as much as an inch of rain per hour. But instead of slowly percolating through ecosystems and soils, the rain rushes over saturated ground in a destructive flood. Rather than replenishing depleted groundwater, the deluge exceeds the limited capacity of rivers and reservoirs, causing overflows.

This forces water managers in flood-prone areas into a delicate balancing act. Water is the state’s most precious resource, and managers need to hang on to as much of it as possible. But repeated heavy storms mean they also need to reserve room to absorb floodwater.

Those facing the most severe drought conditions have other issues. In early December, Lake Sonoma’s account was drawn painfully low, Davis said. The reservoir was below 40 percent of its capacity, just under 100,000 acre-feet in volume. As of this week, it was pushing past 120,000, a good sign, but only about half of what the lake can comfortably hold.

Facing unprecedented challenges, Davis said that he is nonetheless optimistic and that the state is “better prepared than we’ve ever been” to handle the weather extremes. One source of his hope is a pilot program that uses improved forecasting and modeling to make decisions about retaining or releasing water from reservoirs.

Sonoma has used the system, known as forecast informed reservoir operations, in one of its smaller reservoirs, and Davis credited it with saving thousands of acre-feet of water.

“It’s going to be the way water managers make it through these extreme events,” he said.

Meanwhile, a wet December and early January are no guarantee that all this water will last until spring. Look no further than last year’s weather, said Ellen Hanak, director of the Water Policy Center at the Public Policy Institute of California. The state saw similar winter storms, before an extraordinarily warm and dry stretch obliterated most of the snowpack.

“Last year was not a good year, even though we started out wet,” Hanak said.

California’s traditional rainy season runs from October to April, so much will turn on the coming months.

“We have a few months that still need to play out here,” Hanak said. “But this is a welcome start.”

A key factor to navigating long-term drought conditions — and ensuring the state’s well-being — will be finding new ways to harness the floodwater from future megastorms, effectively using one climate disaster to mitigate another.

Hanak and other experts see promise in underground water storage, which has been used in some parts of the state but could become increasingly popular as snowpacks become less reliable.

Jane Dolan, the president of the Central Valley Flood Protection Board, has been pushing state and local governments to expand floodways and restore wetlands as a way to guard against heavy storms and recharge groundwater basins. California’s recent storms show the urgent need to do both, she said.

“We pay now to make things more resilient and protect people’s lives and property, or we’re going to pay later by fixing the massive damages that occur,” Dolan said from Chico, the state’s largest city north of Sacramento, where she has spent decades in local government.

“Water is the number one issue in California,” she said. “We either have too much of it, or not enough.”

Is the future of tech in Austin, Texas?

NASA is Mapping Giant Clouds of Methane Released by “Super-Emitters” Across...

‘I’ve Never Seen Anything Like This’: Possible Tornado Destroys Half Of...