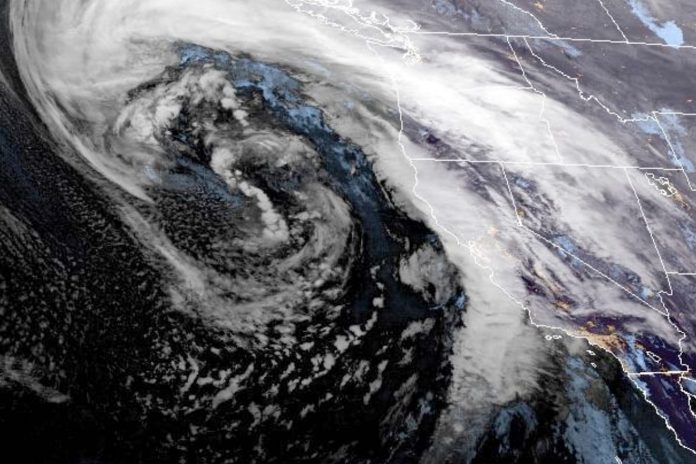 When extreme weather events occur, puzzling and often ominous terms crop up — “firenado,” “polar vortex,” “thundersnow.” On Wednesday, though, California declared a state of emergency as the latest in a string of storms slammed the West Coast with a name that sounded oddly sunny: “Pineapple Express.”

The storm, which has brought 100-plus mph wind gusts and could cause flooding and landslides, is no day at the beach, however. So what, exactly, is a Pineapple Express?

The powerful storm type gets its name from its origin in the tropical Pacific around Hawaii and the island state’s affinity for the sweet treat. Pineapple Express storms carry moisture northward from the tropics and dump it in high concentrations on the West Coast and Canada.

To make matters worse, this particular storm system is also a rapidly intensifying “bomb cyclone” system (another menacingly named storm referring to the speed at which the air pressure drops).

Fueled by a powerful southern portion of the polar jet stream, which is strongest in the winter, according to the American Meteorological Society, the Pineapple Express is sometimes likened to a “conveyor belt” of moisture. It can bring as much as 5 inches of rain a day, the National Oceanic and Atmospheric Administration says.

Pineapple Express storms are a particularly well-known type of “atmospheric river,” considered a fundamental feature of the Earth’s water cycle. They can be beneficial — supplying fresh water and even alleviating drought or quelling wildfires — but they can also slam the West Coast and Canada with dangerous amounts of snow and rain. Scientists have cautioned that they could worsen amid climate change.

These rivers in the sky can stretch thousands of miles long and are often a few hundred miles wide. The largest freshwater “rivers” in the world, they can carry more than twice the volume of the Amazon.

They occur elsewhere, too — in the United Kingdom and the Iberian Peninsula, for example, which receive moisture from the Caribbean. In February, Brisbane, Australia, received 80 percent of its typical yearly rainfall in three days from an atmospheric river.

Similar to hurricanes, atmospheric rivers are ranked from 1 to 5. The scale — which goes from “primarily beneficial” to “primarily hazardous” — corresponds to how much moisture they transport as well as how long they last in a particular area. The rating system wasn’t launched until 2019.

On Wednesday, the Center for Western Weather and Water Extremes forecast that the coming Pineapple Express would reach Category 3, a “strong” event, in the San Francisco Bay area. In the coming days, it could increase to a 4, but the organization cautions that it is difficult to make predictions too far out.

While California is known for its long dry spells, the Golden State is no stranger to such weather events. Researchers found that from 1979 to 2019, atmospheric rivers of varying intensities hit the West Coast an average of 24 times per year. In October 2021, one brought California some relief, following a record-breaking dry period.

In recent weeks, atmospheric rivers have been hitting the region again.In December, such events poured 11.6 inches of rain on San Francisco, The Washington Post reported.

Scientists have projected that such weather whiplash — extreme dryness to wet precipitation events — could increase by 25 to 100 percent in California by the end of the century. And as the planet warms, atmospheric rivers could get wider, longer and more intense, studies have suggested.

Mike Branom and Kasha Patel contributed to this report.

These 3 Tech Stocks Are Building the Future

Nobody Has Ever Been Where This Conference is Being Held

Signs of Water on Mars Might Actually Be an Indication of...

NIH offers $1 million in cash prizes for innovative diagnostics to...