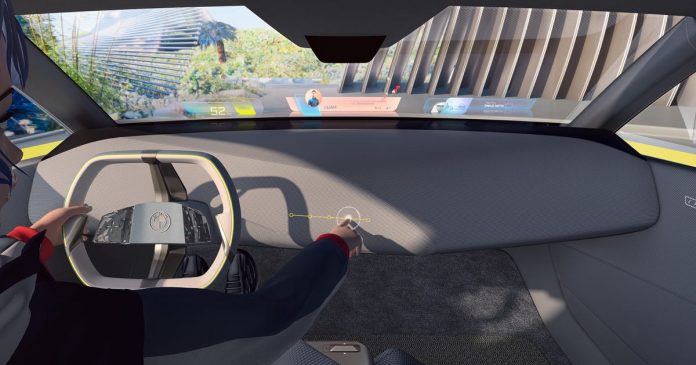 CES may be considered the most influential tech event in the world, but it’s also one of the largest and most important auto shows in the US.

This year at CES 2023, hundreds of exhibitors from across the automotive sector have already unveiled some of their latest products and cutting-edge technologies. BMW announced the futuristic i Vision Dee electric car, while Sony and Honda revealed their EV prototype Afeela, integrated with Epic Games’ Unreal Engine technology to provide next-level entertainment, communication and safety features.

If you want to take a closer look at the new auto technology that’s been unveiled at CES 2023 so far, check it out below. For more, here are the wildest highlights we’ve seen this week and the wackiest tech, too.

Hearing Dolby Atmos in a Car Blew Me Away

Dolby Atmos is immersive surround sound technology that you’ll really only find at the theatre or in a few pricey speakers, soundbars and headphones for consumers. Unlike your typical left and right audio experience, Dolby Almost brings you sounds from every direction imaginable, and that immersive audio experience is coming to the Mercedes-Benz Maybach. Check out our experience with Dolby Atmos at CES 2023 in the video above.

BMW unveiled the i Vision Dee, a futuristic midsize electric sedan with a digital assistant, color-changing technology and an augmented-reality windshield. The car’s exterior is equipped with 240 E Ink segments that can be controlled individually; you could go with a solid color if you want, but each separate panel can be customized, so you can go wild with patchwork designs. But the most exciting new feature has to be the fully digital, mixed reality windshield. You’ll be able to decide how much “digital content” you see in front of you while you drive, such as driving information, communications, AR projections and virtual worlds.

Sony and Honda unveiled the Afeela, an electric midsized sedan, at CES on Wednesday. The alliance between the two companies works like this: Honda provides the automotive engineering and after-sales service part, while Sony covers the tech side of things, including electronics, sensors and entertainment. The front of the EV has a built-in display that can be used to show off information to other drivers and pedestrians, while the entire body comes equipped with dozens of cameras and sensors to detect objects and provide an autonomous driving experience. Inside, the interface of the car is powered by Qualcomm technology and Epic Games’ Unreal Engine to enhance the driving experience and provide a quality entertainment system.

Amazon Ring now wants to live in your car

Amazon’s Ring creates security cameras for your home and business, to provide security and allow you to keep an eye on package deliveries and other activities, and now it wants to do the same thing for your automobile. The Ring Car Cam is a dashboard-mounted dual-facing camera that can record both inside and outside your car, while you’re driving or parked. While the camera stores footage locally, it can connect to your Wi-Fi network whenever you’re parked nearby to upload footage. You can also get LTE support to always stay connected, allowing you to view a live feed in case someone else has your car; you’ll need to pay for a Ring Protect Go subscription for that. You can preorder the Ring Car Cam for $200 right now, or wait to buy it when it’s released in February for $250.

An electric pickup truck… that follows you around?

Ram unveiled the Ram 1500 Revolution BEV, its first ever fully electric pickup truck, at CES 2023. The electric truck is equipped with back-swinging suicide doors, three rows of seats, an AR display, an AI personal assistant and “themes” for the interior of the car. For example, you can enable party mode or relax mode — each changes the seat positions and orientation, lighting, sound system and even the opacity of the skylight. But the most interesting thing about the electric truck has to be its “shadow mode” feature, which allows the truck to follow the driver around, sort of like a dog, when they’re on foot.

Nvidia will bring its gaming platform to select cars

GeForce Now, Nvidia’s popular cloud gaming service that allows you to play games like Fortnite and Apex Legends on your phone, tablet and TV, is soon coming to your car. During its showcase at CES 2023, Nvidia announced a partnership with Hyundai Motor Group, Polestar and BYD to integrate the gaming platform to several internet-connected vehicles. A passenger in the car can load up GeForce Now in a built-in display and play games such as Rocket League with a connected gamepad.

On Thursday, Google announced the release of its latest Android Auto software. The redesign prioritizes navigation, communication and music — for starters, Maps is now closer to the driver’s seat, making it easier to view, and there’s also a new quick launcher that lets you access the apps you need most, faster. A new split-screen layout adapts to your screen size and orientation, and Google Assistant provides smart suggestions like arrival time sharing, message replies and music or podcast reminders. If you have one of the latest Pixel or Samsung phones, you’ll soon be able to make WhatsApp calls via Android Auto.

Flying cars haven’t quite taken off yet, but we seem to be one step closer. US company Aska announced what may be the world’s first four-seater flying car at CES this year. The Aska A5 is an electric-powered vehicle, the size of a small SUV, that can travel on the road and up to 250 miles by air with a single charge. It’s also equipped with a small gas engine that can give you an extra 50 miles. And you can expect it to hit the roads (and the skies) pretty soon. According to CEO Guy Kaplinsky, the Federal Aviation Administration could approve the A5 this month, and the company plans to begin a ride-sharing service with a fleet of its flying vehicles in 2026. The A5 comes with a hefty price tag of $789,000, and you can pay a $5,000 deposit to get on the preorder list right now.

Move over Hubble, the James Webb Space Telescope is here

What The 5 James Webb Space Telescope Pictures Tell Us

Netflix’s small iOS change is bigger than you think

Green Comet to Pass Earth for the First Time Since the...

Air quality advisory issued for Monday in Bay Area due to...

How the James Webb Space Telescope broke the universe