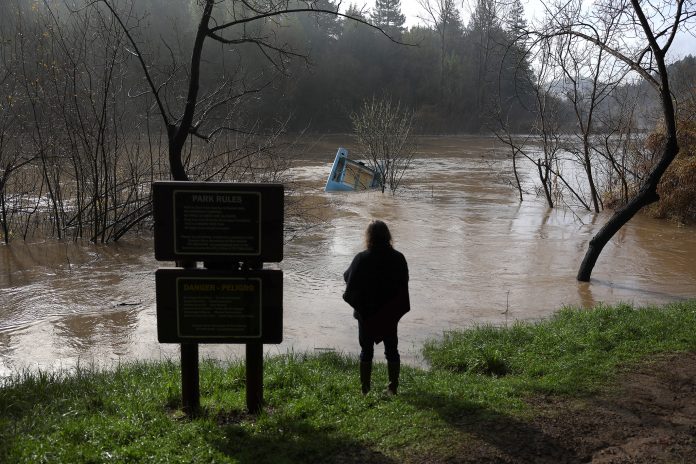 The San Francisco Bay Area received a break from the rain on Monday afternoon, but another wave of storm activity is expected Tuesday, bringing a chance for thunderstorms, as a potent atmospheric river continues to bear down on California

The National Weather Service’s Storm Prediction Center has a “marginal risk” — which is a 5 to 10% chance — for thunderstorms across the greater San Francisco Bay Area on Tuesday. Scattered showers are also forecast to persist into Tuesday, though overall rain amounts are likely to be less than they were on Monday.

While the potential for thunderstorms may sound low, Brooke Bingaman, a forecaster with the weather service, explained that the risk if they do occur is high due to the heavy rains the region has received since Dec. 26.

“If you’re in an area that gets a heavy thunderstorm, there’s potential for it to exacerbate any flooding that’s going on in your area,” Bingaman told SFGATE on the phone at 9:30 p.m. Monday. “Even though it’s a 5 to 15% chance, we still need people to be on their toes. They need to listen to local officials for evacuation orders.”

The weather service said in a briefing on Monday night that “flash flooding is possible if storms impact a burn scar or other hydrologically sensitive areas.”

The next wave of the storm is expected to approach the Bay Area sometime between 1 a.m. and 4 a.m. Tuesday. “Then once it arrives that potential for thunderstorms will continue through the day Tuesday,” Bingaman said.

The thunderstorm forecast includes a chance for thunder, lightning, heavy downpours, powerful winds, small hail and even a very slight chance for tornadoes.

With soils already saturated from recent heavy rains, Bingaman said the weather service is especially concerned about the risk of fallen trees. “We already have trees falling left and right, you get a thunderstorm and it’s game over,” she said.

The weather service said there’s a 5% chance for tornadic activity, with the chance being highest on the coast. Again the potential is low, but the risk if it happens, is quite high, Bingaman emphasized.

“It could bring very locally strong winds,” she said. “There could be damage to homes. If people get the alert that there’s tornadic activity, they have to think about keeping themselves safe in their homes. They need to find an interior room in their home, hopefully one that doesn’t have windows. The more walls you can put between you and the outside of your house, the better. Get pillows, blankets and a mattress to protect yourself from any flying debris.”

Oregon fire officials warn ‘we’re really concerned about the next 72...

Jackson pulls together for storm cleanup

iPhone 14 Emergency SOS: Here’s How I Used a Satellite to...