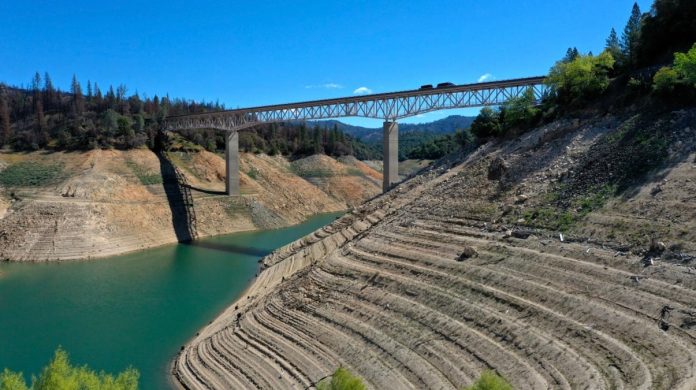 New NOAA research finds that the extreme heat and drought experienced by California and Nevada from October 2020 to September 2021 was made six times more likely by climate change. This photo of Lake Oroville, California in April 2021 reflects the severity of water shortages across the region that year. NOAA

Why you can trust us

Founded in 2005 as an Ohio-based environmental newspaper, EcoWatch is a digital platform dedicated to publishing quality, science-based content on environmental issues, causes, and solutions.

The climate crisis has its fingerprints on several extreme weather events over the past two years, from drought in California to heavy rain in the UK.

That’s the conclusion of the Bulletin of the American Meteorological Society (BAMS) special report Explaining Extreme Events in 2021 and 2022 from a Climate Perspective, presented by the National Oceanic and Atmospheric Administration (NOAA) at a conference on Monday, as The Guardian reported.

“A key finding emerging both from this new research in BAMS and elsewhere in the scientific literature is that extreme heat events are increasingly far outside the historical record because of climate change, which has implications for risk assessment,” NOAA National Centers for Environmental Information climate scientist and report co-editor Stephanie Herring said in a NOAA press release. “To better understand what we might be facing in the future, we need to continue to research how these events are changing over time and consider the possibility that we are underestimating future risk.”

The report is the latest in the 11-year series Explaining Extreme Events from a Climate Perspective. Of the more than 200 individual studies included in the series, more than 80 percent of them found a connection between an extreme weather event and the climate crisis.

“These studies contextualize recent extreme events, explaining how the risk for them is changing in time, and highlighting how climate change is making them more likely or severe,” NOAA Chief Scientist Sarah Kapnick, Ph.D, said in the press release. “By helping quantify these evolving risks and what is causing them, we can help communities plan and prepare for the future with a better sense of what lies ahead.”

The 2021 events ranged from droughts to both terrestrial and marine heat waves to heavy rainfall events. For example, one paper found that drought conditions in California and Nevada between October 2020 and September 2021 were made at least six times more likely by the climate crisis and La Niña, extending a megadrought in the U.S. West that had previously been found to be 42 percent more extreme because of anthropogenic climate change. On the other end of the extreme, in 2021 the UK saw its wettest May since 1836. A study found that the precipitation was made about 1.5 times more likely because of climate change. In addition, 2021 gave northern China its wettest September on record, an event made two times more likely by the human burning of greenhouse gases.

Other extremes included in the report were:

There were also warnings for the future. One of the incidents studied was a 2021 October heat wave in South Korea that saw the mercury average 3.9 degrees Celsius higher than would have been expected during that time of year between 1991 and 2020. However, this one-in-6,250-year event could become the “new normal” in the 2060s unless efforts are made to rapidly reduce climate pollution.

“The extreme nature of these events is very alarming,” Herring said in the press release. “We need to understand if these events are signs that things are getting hotter faster than we had expected. We know extreme heat is going to get worse, and additional research will help us better quantify future change.”

While the report did not focus on 2022 events, other studies have already found that some of last year’s biggest weather disasters were worsened by the climate crisis, The Guardian noted. This included deadly flooding in West Africa, which was made around 80 times more likely.

Subscribe to get exclusive updates in our daily newsletter!

Olivia Rosane is a freelance writer and reporter with a decade’s worth of experience. She has been contributing to EcoWatch daily since 2018 and has also covered environmental themes for Treehugger, The Trouble, YES! Magazine and Real Life. She holds a Ph.D. in English Literature from the University of Cambridge and a master’s in Art and Politics from Goldsmiths, University of London.

One year ago a derecho swept across Iowa with multiple tornadoes

Google ‘The Last of Us’ for a Cool Easter Egg

LG’s new optical zoom sensor aims to get rid of the...

From fire to floods, extreme weather keeping students out of classrooms...