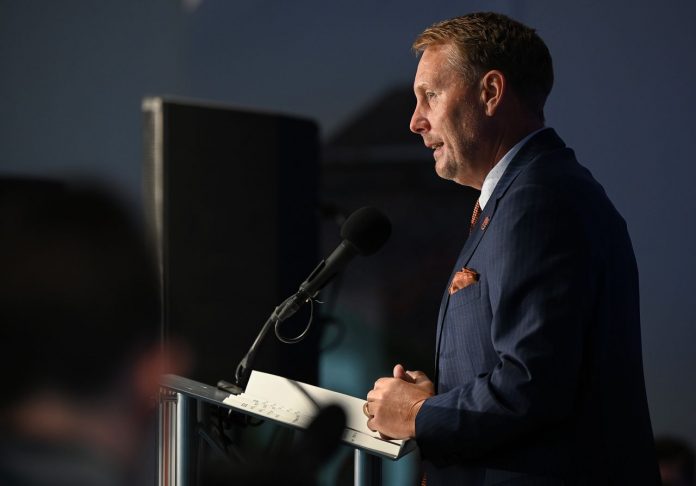 This is an opinion column.

The first time I heard it, I was listening to sports talk radio and eating a sandwich in my car between Tuesday meetings. The topic of the day was, of course, Auburn’s new head coach, Hugh Freeze, and the public reaction to his hiring.

The caller said, “Of course, everybody deserves a second chance.”

I stopped chewing. Deserves? Indeed, we often want a second chance, and many are fortunate to receive and make good use of second chances. But as a Christian, the word “deserve” sets off a theological alarm in my head. And since Hugh Freeze is very public about his relationship with Christ, I have sought to make sense of this situation involving him and my beloved alma mater through that lens.

Then I watched Freeze’s introductory press conference, where AL.com reporter Joseph Goodman asked him why second chances are so important. Freeze responded, “I don’t know anybody in this room that doesn’t deserve a second chance, and truthfully if everybody’s life was as documented as mine, it would probably be uncomfortable for a lot of people. I don’t know if ‘deserved’ is the word, but I sure am thankful for grace and that I do get to keep fighting every day for another chance.”

So Freeze started his response with the same theological error and then walked it back. I was relieved by that. Some phrases or sentiments that aren’t biblically sound are often repeated in our culture because they seem good or kind. But that doesn’t make them correct.

(If you’re not a Christian, feel free to eject now. Cause we’re about to have Sunday School up in here.)

The Bible tells us that we’re all sinners and that the penalty for sin is death. That’s what we deserve. We can never be righteous before God on our own, and that’s why Christ gave his life for us: he was and is the only perfect, sinless sacrifice sufficient to atone for all our wrongdoing.

But we did not deserve it. It was a lavish act of grace, which is unmerited favor. Undeserved. Unearned.

Sin has consequences, both in this life and in the spiritual realm. Sin is costly on both levels to us and those around us. Just as God doesn’t owe us forgiveness but has chosen to give us grace when we repent, our neighbors don’t owe us second chances when we betray their trust. They should forgive us; that’s biblical. But that’s not the same thing as a second chance.

If my buddy gets caught stealing money from the bank where he works but confesses and makes restitution, his boss should forgive him. That doesn’t mean he deserves to continue handling other people’s money. He is not owed a second chance in banking. If I get three DUIs but turn my life around and sober up, you should forgive me for my prior mistakes. But I don’t deserve to drive a school bus or commercial vehicle. Even when we are fully forgiven, how those around us choose to engage with us in light of our past errors is a matter of wisdom that is not strictly prescribed.

So what does reflecting the grace of God look like, then, believer-to-believer, in a fallen world?

I admit it: I was sorely disappointed in Auburn’s decision to hire Coach Freeze. It seemed like the worst kind of crash landing to go from the leadership of Carnell Williams to a controversial figure like Freeze. One man’s service is so defined by character and integrity that it resuscitated a battered team and unified a beleaguered fanbase overnight. The other man’s baggage divided us again, deeply, before he even arrived in town.

That’s a tough piece of meat to chew and swallow. Lots of gristle. It has taken me a couple of days to grieve what is lost and make peace with what is.

However, Freeze said several things in his press conference that give me a reason to hope he will use his second chance wisely. He does seem grieved by his past mistakes. That’s good. Our sins and what they cost others should bother us enough to dissuade us from repeating them.

The only thing he said that made me wince was the line I quoted above when he attempted to recalibrate how we view his past by saying that “a lot” of other people would be made uncomfortable by the type of scrutiny an SEC coach endures. Some would. But I’m grateful to know a lot of men and women who–while not perfect–manage to get through their entire lives without developing an escort service problem. It’s not a high bar.

And even if such was typical behavior, it’s irrelevant. Because Coach Freeze knows the scriptures well enough to know that our neighbors’ behavior is not the standard to which we aspire. Christ’s example is.

So here we are: Hugh Freeze and a big chunk of the Auburn fanbase that isn’t wild about being the laboratory where time will test the authenticity of his rehabilitation. I am choosing to trust the instincts of good men closer to the eye of this storm, like Freeze’s new Associate Head Coach, Cadillac Williams. I am choosing to trust the guardrails of the ongoing, self-imposed accountability plan that Auburn Athletics Director John Cohen referenced in the press conference.

I’m going to give him the chance he asked for on Tuesday. A chance to prove that we can trust him to leave Auburn better than he found it.

Neither Hugh Freeze nor I deserve second chances. Because I am the recipient of undeserved grace from the hand of Christ, I am choosing to extend the same to Freeze. As we advance, I pray that his life will glorify God and reflect the values of the Auburn Creed so that I never feel foolish for it. And if we win a few ballgames along the way, all the better.

Dana Hall McCain writes about politics, faith, and culture for AL.com. She was an Auburn Tigerette under Coach Pat Dye, a War Eagle Girl, and an executive officer in the Auburn SGA. As a result, she cares too much. She also hangs around with an unusually high number of Southern Baptist preachers, who force her to think about theology all the time. It’s exhausting.

As flood alerts lit up phones, did 'warning fatigue' set in?