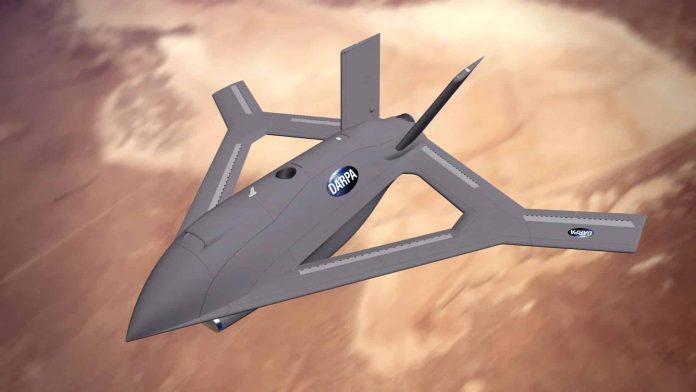 The Defense Advanced Research Projects Agency (DARPA) has selected Aurora Flight Sciences to move into the detailed design phase of the Control of Revolutionary Aircraft with Novel Effectors (CRANE) program. The project is centered on an experimental uncrewed aircraft that does not have traditional moving surfaces to control the aircraft in flight.

The decision came after the successful completion of the project’s Phase 1 preliminary design, which resulted in an innovative testbed aircraft that used active flow control (AFC) to generate control forces in a wind tunnel test. The project has now been moved on to phase 2, which will focus on the detailed design and development of flight software and controls. It will also culminate in a critical design review of an X-plane demonstrator that can fly without traditional moving flight controls on the exterior of the wings and tail.

The contract includes a Phase 3 option in which DARPA intends to fly a 7,000-pound X-plane that addresses the two primary technical hurdles of incorporation of AFC into a full-scale aircraft and reliance on it for controlled flight. The demonstrator aircraft will have some unique features, including modular wing configurations that enable future integration of advanced technologies for flight testing either by DARPA or potential transition partners.

“Over the past several decades, the active flow control community has made significant advancements that enable the integration of active flow control technologies into advanced aircraft. We are confident about completing the design and flight test of a demonstration aircraft with AFC as the primary design consideration,” said the CRANE Program Manager Richard Wlezien. “With a modular wing section and modular AFC effectors, the CRANE X-plane has the potential to live on as a national test asset long after the CRANE program has concluded.”

The AFC suite of technologies allows for multiple opportunities for aircraft performance improvements. These include the elimination of moving control surfaces, drag reduction and high angle of attack flight, thicker wings for structural efficiency and increased fuel capacity, and simplified high-lift systems.

“Thanks to a variety of innovative participants, the CRANE program has significantly advanced the state of the art of multiple active flow control technologies,” said Wlezien. “We are uniquely positioned to build on those achievements by evaluating a wide range of relevant technologies during our planned X-plane flight tests.”

Kena: Bridge of Spirits is coming to Steam next month with...

Fundraiser for Texas teen whose truck got caught in tornado surpasses...

Why Microsoft views quantum technology as a ‘big prize to go...

James Webb Space Telescope vs. Hubble: How will their images compare?

Captives could have a “big future” within clean tech