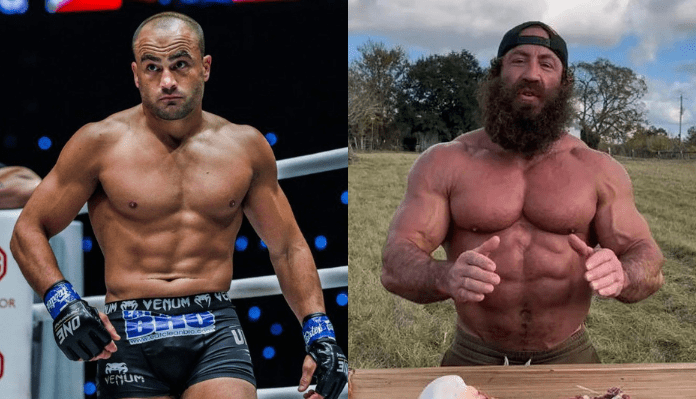 Eddie Alvarez has tweeted a screen shot of a DM reply he received from the ‘Liver King’ after the former ONE, UFC and Bellator fighter messaged the internet star accusing him of taking an ‘awe full ton of steroids.’

The raw eater is currently facing internet-wide backlash following revelations that he allegedly, does indeed do what Alvarez was accusing him of. Screenshots were shared online that suggested the ‘LK’ ingests a large amount of performance-enhancing drugs to get his uber-jacked physique.

Liver King, who has sold ancestral supplements and promoted a meat based diet for men looking to increase their vitality naturally, has claimed to be natural and never used PEDs.

Leaked emails indicate he was on numerous steroid and non-steroid PEDs.https://t.co/Hi4cSk2wJM pic.twitter.com/EZn7Dt0Tmg

Alvarez’s initial message reached out to the 45-year-old and said,

“Hey brother, I love watching your stuff and does my son, You seem incredibly health conscious, but it’s hard for me to neglect that fact that is appears you do an awe full ton of steroids, growth or something unnatural to achieve this build. It seems like a complete shame to me to push conscious healthy eating and fitness lifestyle while then injecting some of that stuff.”

Sent this last year to the King himself 😂😂😂😂😂 https://t.co/FWLDlrRNpL pic.twitter.com/P86vfBfT7z

In the wake of the recent allegations against the TikTok star, Alvarez then shared a part of the reply from the social media stalwart who defended himself vehemently by saying,

“I’ve never cheated nor taken a shortcut in any capacity of life…you earn the life and wife that you behold,” wrote the LK to Alvarez. “Most people think it’s impossible because they look like relative shit, despite doing movements that they call work (which isn’t.)” he wrote. He then continued to defend himself to Alvarez by saying, “and despite eating clean (which isn’t)…my thesis is that if you commit to the 9 Ancestral Tenets, you will unlock the greatest version of yourself (your inner beast)…you will optimise your testosterone, your growth hormone, your IGF-1, your DHT, key metabolic markers and you will achieve higher version of yourself that is to behold too.”

Live King’s message to Alvarez continued by saying: I believe in the ways of our ancestors…We are descendants’ added the muscular Texan but Alvarez neglected to clearly show the rest of the message.

Of all the people to lecture about unleashing one’s ‘inner beast’ to, Eddie Alvarez is an interesting choice. ‘The Underground King’ is widely-regarded as one of the biggest savages in MMA. The Philly-native is currently a free agent having departed ONE Championship by mutual consent. He’s been linked with a move to the PFL as well as a return to Bellator. And he hasn’t ruled out a return to the Octagon after he and former rival Michael Chandler both expressed interest in doing a trilogy.

iPhone 14 Pro rumored to upgrade to a 48-megapixel camera

Microsoft issues a fix for Exchange Y2K22 bug that shut down...

Hugh Freeze in position to succeed quickly at Auburn amid modern...

She risked everything to expose Facebook. Now she’s telling her story.