Eddie Redmayne’s luxury £2million family holiday home is devastated in French Riviera wildfire as his father, 83, reveals the land ‘looks like a scene from WWI’

By Andrew Young For Mail On Sunday

Film star Eddie Redmayne’s luxury £2 million family holiday home has been devastated in a wildfire around the French Riviera.

The blaze destroyed the upper floor of the property, which his parents have owned for nearly 35 years. Oscar-winner Redmayne, 39, spent childhood holidays and weekends at the six-bedroom villa.

The idyllic hillside house overlooks a vineyard, is surrounded by forests, has its own swimming pool, tennis court and a boules pitch – and is rented out in high summer for £7,800 a week. 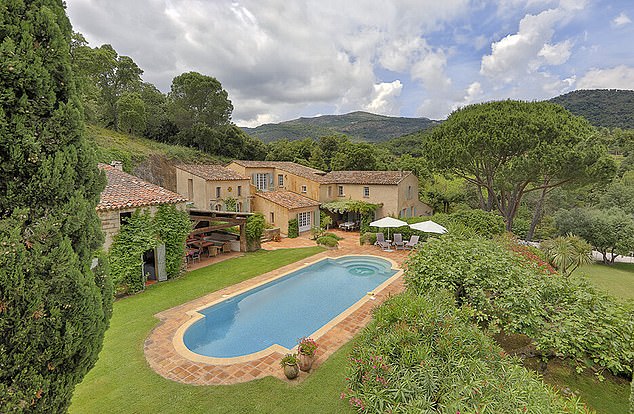 The idyllic hillside house overlooks a vineyard, is surrounded by forests, has its own swimming pool, tennis court and a boules pitch

But it has been ravaged by France’s largest wildfire of the year, which started on Monday.

It tore across 20,000 acres of the region of Var near Saint-Tropez, a popular holiday spot for well-heeled Britons, destroying dozens of houses before it was brought under control.

Redmayne’s parents Richard and Patricia, who live in Chelsea, South-West London, were due to fly out to France this weekend to inspect the damage to their villa.

Investment banker Richard Redmayne, 83, said the house was occupied at the time of the blaze by friends who were forced to flee.

He told The Mail on Sunday: ‘The whole upper floor and the roof – was burned up. The heat was clearly intense. The hill at the back of the house now looks like a scene from the First World War.

‘We have had fires before there. We had one 15 or 16 years ago. But my gardener said to me that this last fire moved so fast that it covered the same distance in an hour that it took the earlier one to travel in three days.’

Eton-educated Redmayne won a Bafta, an Academy Award and a Golden Globe for his role as physicist Stephen Hawking in the 2014 film The Theory Of Everything.

Gov’t Inaction Could Wipe Out A Defining Feature Of The Grand...

SpaceX, NASA to launch 3 astronauts and 1 cosmonaut to the...

Can Morton be the man? Takeaways from Texas Tech’s loss at...

Violent storms and droughts ravage parts of Europe and Asia