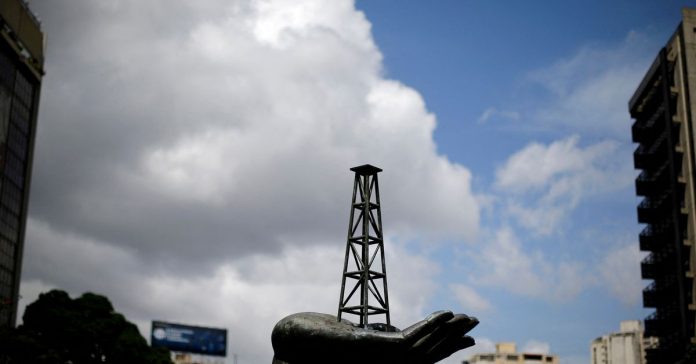 HOUSTON, Jan 17 (Reuters) – The new head of Venezuela’s state oil company PDVSA has suspended most oil export contracts while his team reviews them in a move to avoid payment defaults, according to an internal document seen by Reuters and people familiar with the matter.

Since U.S. trading sanctions were first imposed on PDVSA in 2019, the company has increasingly resorted to little known middlemen to allocate its oil exports, leading to big price discounts and problems with payments affecting its cashflow.

The freeze order is leading to port delays, as vessels that were loading have been sent away and are waiting for new directions, the people said.

PDVSA’s new Chief Executive Pedro Rafael Tellechea last week wrote to the heads of the company’s divisions of supply and trade, domestic market, international market, finances and foreign affairs and notified them of the contract suspensions. The letter did not specify how long the freeze would last.

Tellechea, an engineer graduated from a military academy who is also running state petrochemical company Pequiven since 2019, was appointed on Jan. 6 to PDVSA by President Nicolas Maduro along with eight new vice presidents.

The suspension so far has affected little known firms that act as middlemen in PDVSA’s sales to Asian refiners. Cargoes chartered by U.S. oil firm Chevron Corp (CVX.N) and Cuba’s Cubametales have not been affected by the contract revision, according to separate documents and the sources.

As of Jan. 17, most berths at Venezuela’s main oil terminal, Jose port, were empty and over a dozen vessels were at the anchorage area waiting for instructions. At other terminals, ship-to-ship transfers were interrupted and some customers were instructed to prepay cargoes entirely before delivery, the people said.

PDVSA and Venezuela’s oil ministry did not immediately reply to requests for comment.

PDVSA’s previous administration last year had imposed new contract terms to its spot customers, demanding prepayment of a least half of the cargoes’ value, a strategy to avoid tankers set sail without proper payment, a situation that has hit its finances in recent years amid U.S. sanctions.

Less than a handful of customers are currently authorized by Washington to trade Venezuela-origin cargoes, including Chevron, Italy’s Eni (ENI.MI) and Spain’s Repsol (REP.MC); so the lion’s share of PDVSA clients are firms with no track record of trading and no credit guarantees. The U.S. government has identified many of these firms as shell companies.

Venezuela’s oil exports last year declined 2.5% to 616,540 barrels per day due to infrastructure outages, U.S. sanctions and rising competition in its key Asia market despite assistance from ally Iran, according to shipping data and documents.

Focused on energy-related sanctions, corruption and money laundering with 20 years of experience covering Latin America’s oil and gas industries. Born in Venezuela and based in Houston, she is author of the book “Oro Rojo” about Venezuela’s troubled state-run company PDVSA and Mom to three boys.

Sony has a pending patent for a 3D scanner that puts...

Some Yreka evacuations reduced at east end of McKinney Fire |...