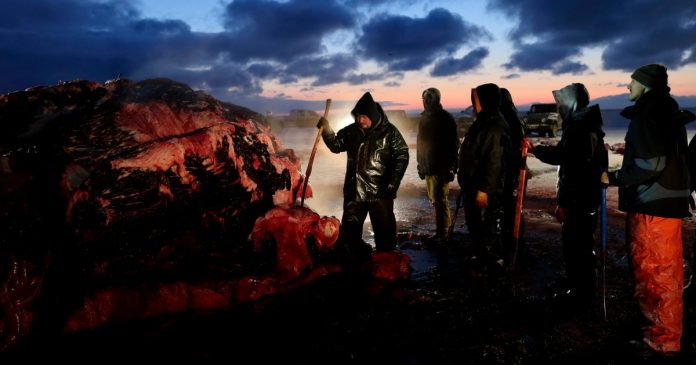 ANCHORAGE, Alaska — After tidal surges and high winds from the remnants of a rare typhoon caused extensive damage to homes along Alaska’s western coast in September, the U.S. government stepped in to help residents — largely Alaska Natives — repair property damage.

Residents who opened Federal Emergency Management Agency paperwork expecting to find instructions on how to file for aid in Alaska Native languages like Yup’ik or Inupiaq instead were reading bizarre phrases.

“Tomorrow he will go hunting very early, and will (bring) nothing,” read one passage. The translator randomly added the word “Alaska” in the middle of the sentence.

“Your husband is a polar bear, skinny,” another said.

Yet another was written entirely in Inuktitut, an Indigenous language spoken in northern Canada, far from Alaska.

FEMA fired the California company hired to translate the documents once the errors became known, but the incident was an ugly reminder for Alaska Natives of the suppression of their culture and languages from decades past.

FEMA immediately took responsibility for the translation errors and corrected them, and the agency is working to make sure it doesn’t happen again, spokesperson Jaclyn Rothenberg said. No one was denied aid because of the errors.

That’s not good enough for one Alaska Native leader.

For Tara Sweeney, an Inupiaq who served as an assistant secretary of Indian Affairs in the U.S. Interior Department during the Trump administration, this was another painful reminder of steps taken to prevent Alaska Native children from speaking Indigenous languages.

Microsoft Insists Call of Duty PlayStation Versions Will Be the Same...

The Elon Musk-Twitter Saga Now Moves to the Courts

Samples of the asteroid Ryugu are scientists’ purest pieces of the...