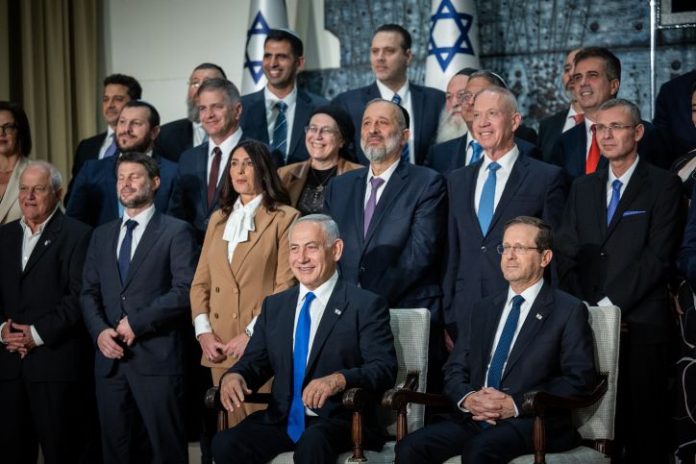 Israel’s 37th government sits down and starts working on Sunday after being successfully sworn in on Thursday – starting the new year with new ministers.

Several decisions were made on Friday, including transferring military authority over settlements near Jerusalem to the police. Still, Sunday marks the first full work day for the new government.

Each ministry is expected to participate in a handover ceremony, where the outgoing minister ceremonially hands over power to the incoming minister. Several of the ceremonies were downgraded or canceled, but as of Thursday, each minister in the 37th government maintains the full effect of their power.

One such transfer is outgoing public security minister Omer Barlev handing over the reigns to far-right lawmaker Itamar Ben-Gvir, whose role will be named national security minister as part of the coalition agreement. This ceremony is receiving more attention due to the incoming minister’s controversial history and goals for his term.

However, despite the controversies, Ben-Gvir polls higher compared to some of his fellow coalition members. This could be because the far-right politician made terrorist attacks one of his biggest focuses, possibly drawing in support from outside his usual base. But there are other security issues that Ben-Gvir will need to address, including an increase in car theft and violence within the Arab sector.

The Jewish Power leader will have unprecedented control over the country’s police, a piece of legislation passed shortly before the government was sworn in. Opponents of the so-called “Ben-Gvir law” have argued that this means police will lose some of their traditional independence.

Anti-Abortion Activists Have Been Collecting Data That Could Be Used Post-Roe...

ChromeOS 107 is now out with tweaks to the Recent Files...

COVID vax-makers say cancer vaccine could be available by 2030

Is invoking the Emergencies Act too much? Time will tell