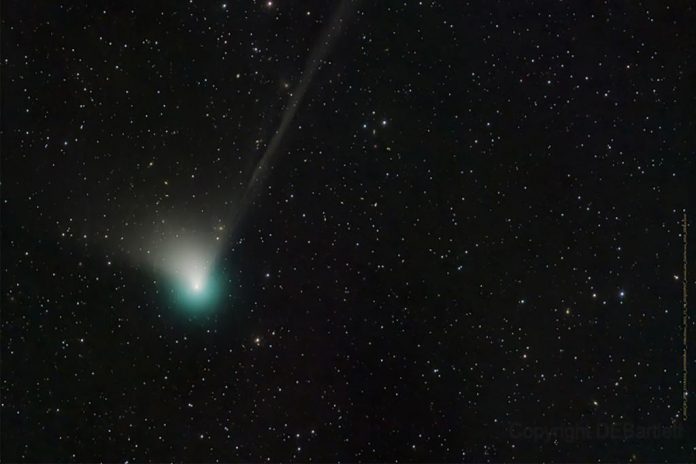 A bright green comet will appear in the night skies above Earth, visible for the first time in 50,000 years.

The recently discovered comet, which was given the catchy name C/2022 E3 (ZTF), will soar its closest to the sun on Jan. 12, and will become visible in the Northern Hemisphere in the morning sky.

In Australia, though, it will become visible from early February as it makes its closest pass by Earth on Feb. 2 when it will be a mere 42 million kilometers away.

Comets can be distinguished from stars by their streaking tails of dust and energized particles – which will cause this one to glow bright green. The glow is caused by an envelope that firms around the comet as it passed by the sun and its icy exterior instantly turns into gas.

Discovered in March last year by astronomers using the Zwicky Transient Facility’s wide-field survey camera in southern California, the comet passes by the far outer reaches of the solar system each time it orbits the sun – which is why it’s taken so long to swing by Earth once more.

It last made its appearance over our blue planet about 50,000 years ago, when a mere two million humans roamed and our ancestors the Neanderthals were not yet extinct.

According to NASA, the comet – though notoriously unpredictable – has been steadily brightening as it approaches the sun, and should be easy to spot with binoculars.

If we’re lucky, it may even become visible to the naked eye in dark skies, NASA said.

Mega asteroid 'could come dangerously close with Earth in 2052', say...

Wildfires: How are they linked to climate change?