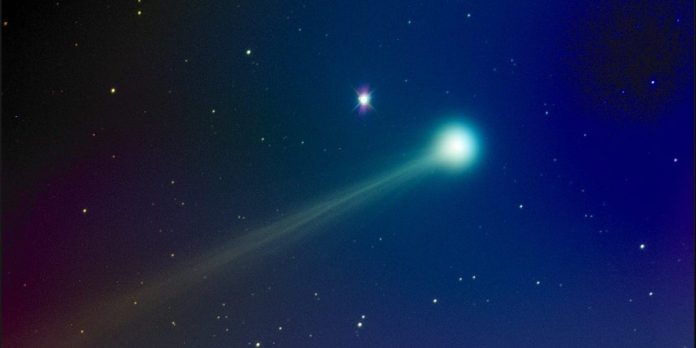 Access your favorite topics in a personalized feed while you’re on the go.

A green comet will pass by Earth for the first time since the Stone Age in February, and it won’t return for another 50,000 years, according to NASA‘s Jet Propulsion Laboratory.

The comet, named C/2022 E3 (ZTF), will be around 26 million miles from Earth on February 2, according to KXAN. February 2 will be the closest the comet has been to the Earth since the Upper Paleolithic era, which is the time humans are believed to have left Africa and settled in Asia and Europe, the outlet reported.

Astronomers first spotted the comet in March, according to a news release from NASA.

“The new long-period comet has brightened substantially and is now sweeping across the northern constellation Corona Borealis in predawn skies,” NASA said in a news release on December 24. “It’s still too dim to see without a telescope though.”

According to NASA, the brightness of comets is “notoriously unpredictable,” but by February 2, C/2022 E3 (ZTF) could be “only just visible to the eye in dark night skies.” The comet has a “greenish coma, short broad dust tail, and long faint ion tail,” according to NASA.

According to USA Today, the comet is visible to people in the Northern Hemisphere in pre-dawn skies with binoculars or a telescope in dark, clear skies for the entire month of January.

The outlet reported that experts say the comet likely came from the Oort Cloud, the farthest region of the solar system that contains a “big, thick-walled bubble made of icy pieces of space debris the sizes of mountains and sometimes larger.”

The forecast on planet Neptune is chilly — and getting colder

The Air Force must adapt and transform now to keep pace...

Much needed rain could bring severe weather to Texoma

The best controller for Elden Ring – give yourself an edge...