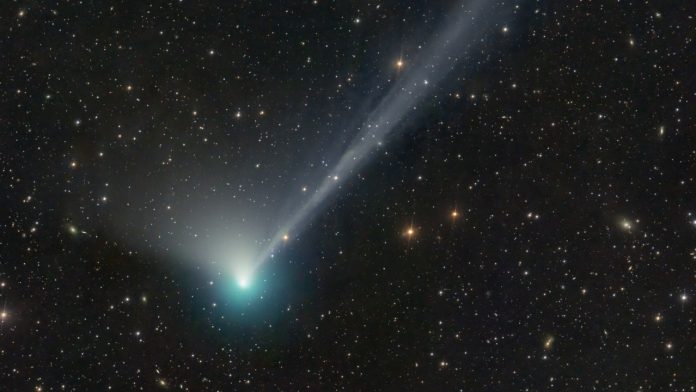 A green comet discovered last March will make its closest approach to Earth this month.

It was already inside the orbiter of Jupiter.

Since then, it has brightened substantially and is sweeping across the northern constellation Corona Borealis in predawn skies, according to NASA.

The agency notes that it is still too dim to see without a telescope – though an image from December reveals its bright coma, short broad dust tail and faint ion tail.

The comet will be at perihelion, its closest to the sun, on Jan. 12 and at the closest to Earth on Feb. 1.

On a voyage through the inner Solar System comet 2022 E3 will be at perihelion, its closest to the sun, on January 12 and at perigee, its closest to our fair planet, on February 1.
(Dan Bartlett)

NASA notes that the brightness of comets is unpredictable, but that – by then – C/2022 E3 (ZTF) could become only just visible to the eye in night skies.

“Observers in the Northern Hemisphere will find the comet in the morning sky, as it moves swiftly toward the northwest during January. (It’ll become visible in the Southern Hemisphere in early February),” it said.

This comet isn’t expected to be quite as much of a spectacle as Comet NEOWISE was in 2020.

It has a full orbit of around 50,000 years, according to NASA’s Jet Propulsion Laboratory, meaning that the last time it came so close to Earth was when Neanderthals roamed the planet.

Neanderthal extinction not caused by brutal wipe out

‘Planet killer’ asteroid that could pose risk to Earth found