“As of 5:30 p.m., the Hawaiʻi Police Department has opened Waikoloa Road from Paniolo Drive to Highway 190,” the County reported. “Highway 190 has also been opened from Waimea to the Daniel K. Inouye intersection. Old Saddle Road remains closed, but Waikiʻi residents will be allowed to access to their property.”

“Fire crews will continue working through the evening and monitor the fire,” the civil defense message stated. “Please stay tuned to your radio for updates and changes in fire conditions.” 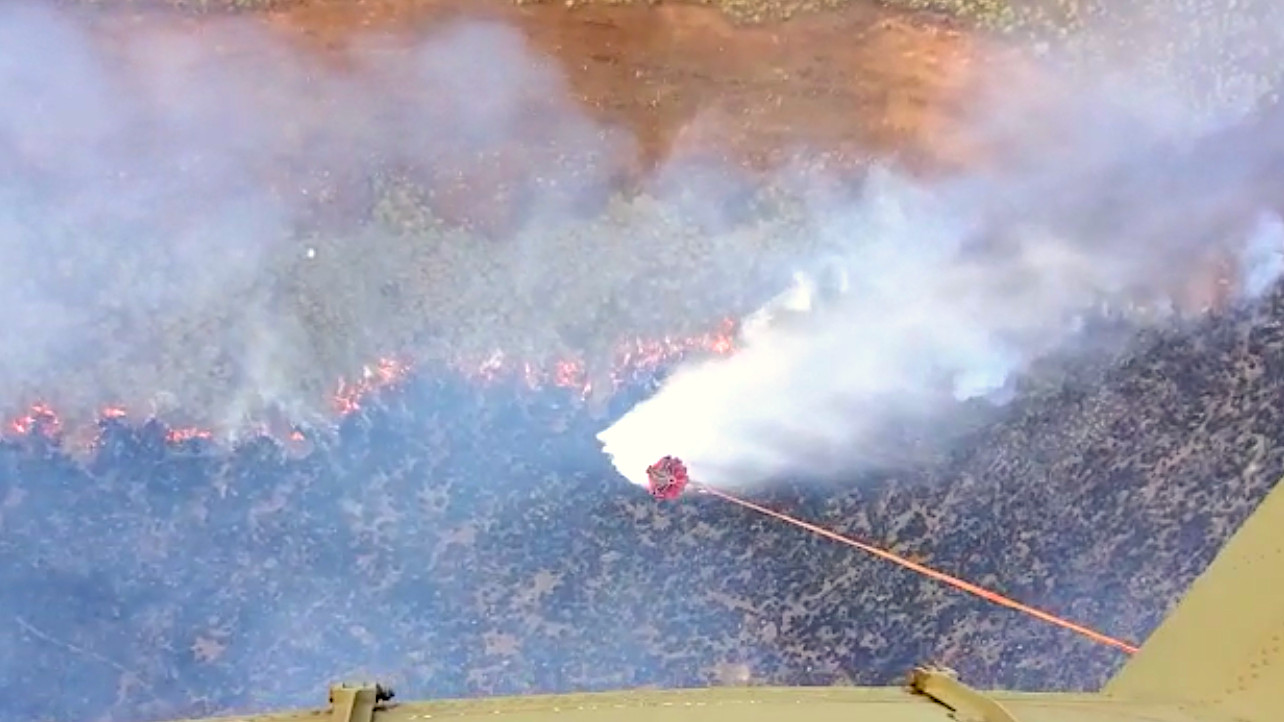 The U.S. Army drops water on the blaze from the air. Photo courtesy PTA.

PREVIOUS STORY – Hawaiʻi County officials said Monday morning that the threat from the Mana Road Fire is stabilized, but there was little new information from emergency officials as of Monday evening.

In his most recent message over Facebook, Hawaiʻi County Mayor Mitch Roth said “there is access to every community, except for Waikiʻi Ranch at this time.”

The following roads are closed, as of the most recent County communication at 4 p.m.:

“At this time, we would like to urge residents to stay out of the affected areas as much as possible,” Roth wrote. “Stay safe and be alert.”

“We are protected, I wont say we are out yet,” said Hawaiʻi County councilman Tim Richards in a Facebook video. Richards spent the weekend keeping constituents informed using social media. “We still have these winds, we still have these hot spots. And the hot spots can be very problematic,” the Kohala councilman said. “You think it’s out, and the wind blows them back up and suddenly we have sparks going out everywhere. So we’re not out of this yet. People need to take precautions, and be careful as we go forward.”

Richards noted extensive fire damage in the Puʻukapu Hawaiian Homestead. Repairs to water infrastructure and fence lines will likely be needed for the ranching community. Two Puʻukapu homes were confirmed lost in the fire.

In a 3 p.m. news release, the Pohakuloa Training Area said its firefighters “continue their efforts, with the combined team of first responders from the State, County of Hawaii, volunteer firefighters, and other agencies to help contain the brush fire, and protect the local communities.”

PTA officials say five U.S. Army aircraft from the 25th Combat Aviation Brigade on Oʻahu continue to drop water on the blaze. “Aircrews are working tirelessly during daylight hours to douse the flames and hot spots from the air,” PTA said.

The size of the area consumed by the brush fire remains 40,000 acres, officials reported Monday.

Elon Musk is poised to become the first person worth $300...

Carbon dioxide is by far the most important driver of climate...

We Designed Cars Using Artificial Intelligence and Behold our Nightmares

A Close Encounter With a Mysterious Moon

LIST: Tornadoes rip through WI, many reach wind speeds over 85...

Tornado touches down in Bowie, pummeling power lines and trees