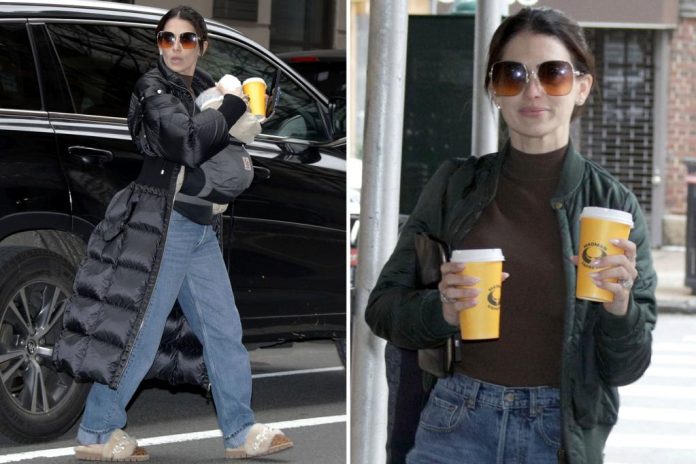 Hilaria Baldwin emerged for a coffee run Saturday morning as she was ripped on social media for using her “fake” Spanish accent while distracting reporters Friday so her husband Alec could escape their Greenwich Village pad.

Baldwin was spotted in jeans and a turtleneck, clutching cups of coffee from the Madman Espresso shop on University Place as she walked with another woman.

On Friday, she told reporters she would speak to them in the wake of the news that Alec will be charged with involuntary manslaughter in the 2021 shooting death of “Rust” cinematographer Halyna Hutchins.

“On a human level, you guys know I’m not going to say anything to you. You know that. So please leave my family in peace and let this all play out. OK?” Hilaria, with her newborn strapped to her chest, told the gathered journalists.

As she then told journalists to “go home,” Alec snuck out and was later spotted smiling as he tried to hide his face while entering the Film Center Building on Ninth Avenue.

Hilaria was later blasted online for trotting out the slight Spanish accent she sometimes employs during her bait-and-switch with the press. In 2020, her true heritage was revealed as Hillary Thomas from Massachusetts — and not the Spanish native as her husband once claimed.

“She sounds so, how you say, authentic,” one snarked, while another mused, “It will never stop being funny that a white girl from Boston pretends that she is Spanish.”

“This is one of the longest-running LARPing characters in history,” another tweet said, referring to live-action role-playing games in which players dress up with props and act out roles.

Hilaria refused to answer any questions Saturday as she came and went, at one point carrying her baby daughter and pushing another of the couple’s seven kids in a stroller.

One local worker said she took pity on Alec Baldwin.

Massiel Pimentel, who works at the Joey Healy Eyebrow Studio on University Place, where Hilaria is a client, said she recently saw the actor at a local bagel shop and wanted to confront him. She claimed he stiffed her cousin, a cab driver in Puerto Rico, out of an $80 fare.

“But I saw him and he looked so bad. I guess this whole situation is really taking a toll on him, so when I saw him I was like ‘Let me just leave him alone.’ Because he looks really bad,” she said.

Her cousin, speaking on FaceTime from Puerto Rico, confirmed he wasn’t paid by the actor, but said the incident happened 10 years ago and didn’t want to give him a hard time.

“He’s in enough trouble as it is with everything that’s going on right now,” he said. “Karma gets you.”

A possible explanation for the difference in the blue hues of...

JWST Has Found Life’s Elemental Building Blocks in The Depths of...

How The US Navy Embraces Digital And Masters AI With Brett...

How to preorder the Xbox Series X mini fridge