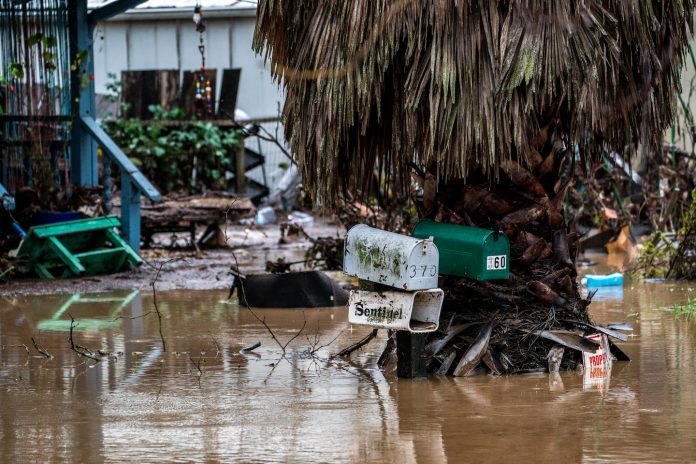 California could get 22 trillion gallons of rain in the coming days. But what does that mean for the state’s drought?

In a perennial problem that even when California does get rain, much of it runs off into the ocean or is otherwise uncollected. But there’s new storm water technology that could help change that, scientists say, as the decades-old discipline shifts to help water managers collect rainwater, purify it and store it for times of drought.

Much of the new technology is often referred to as “green infrastructure,” and can be a more subtle way to collect rainwater off the roofs of houses or sidewalks, and have it sift through porous concrete or grassy fields into reservoirs for later use.

California is being inundated with rain. Will it ease the drought?

Still, to make a dent, it will require more government investment, technological advances and overcoming political obstacles, they said.

The conversation has been edited for length and clarity.

What is storm water technology?

Fisher: It’s kind of two pieces. In general, storm water management is, first and foremost, about mitigating the hazards, avoiding the nuisance, avoiding the flooding and avoiding the damage [that comes with storm rain].

But we know that storm water is also potentially a resource. So, another arm of storm water management is figuring out what to do with some of that water. How can we hold it back? How can we store it until we’re able to use it later?

California’s not done. Three more atmospheric rivers are on the way.

Feldman: California is planning to do an enormous amount of work with storm water capture and harvesting, but the actual implementation of these projects will take time. In many cases, it may take years.

Land has to be acquired, things need to be built, environmental assessment studies need to be undertaken, and probably most importantly, the public in the areas in which this water is being harvested, needs to be brought on board.

How is storm water technology adapting to solve droughts?

Feldman: Storm water harvesting is an extremely old technology. You could go back to ancient Israel, for example, or other parts of the Middle East, in which basically rainwater harvesting techniques were widely utilized.

So what’s the new wrinkle? I would say it is this notion of green infrastructure — where you don’t use a lot of concrete and build storage reservoirs and dams. Instead, you come up with more expedient, more sensible ways of using the natural environment such as parks, wetlands, swampy areas or ponds to intermittently store water.

But unless you’re really looking for it, the technology may be hard to discern. You see parks that have wetlands that are sort of doubling as habitat for various forms of wildlife and being replenished by [and store] rain.

You’ll also notice that neighborhoods increasingly have less impervious surfaces. Impervious surfaces are being replaced by grass and open fields and porous pavement to allow the water to regenerate groundwater basins for example. You’re also seeing on tanks to store water, those sorts of things.

Fisher: Twenty years ago, 30, 40 years ago, storm water was really just thought about primarily as a nuisance. But because of the drought, and because of increased demand on groundwater, I would say there’s a big change that’s taking place.

One of these areas is in imaging the subsurface, and understanding better where our water is, and where there is space for storage. We need to use underground storage because you simply can’t store enough storm water on the surface.

Fisher: I would say no. Drought is highly variable. [And] California’s climate swings between very wet and very dry conditions. Collecting storm water doesn’t change any of those any of the things. But what storm water technology can do is be part of a solution.

Feldman: Storm water harvesting [is] a piece of a complex puzzle. It will not solve all of our problems, but it can solve an appreciable portion of our problems.

We might not want to use rainwater for drinking. However, that water can be treated to various degrees of reuse, at least in order to, for example, irrigate plants or irrigate landscaping.

A giant leap towards ‘other Earths’?

Genius or Dangerous? Why People Spend Fortunes on NFT Art

Billion-dollar disasters in 2021 — including the costliest winter storm on...