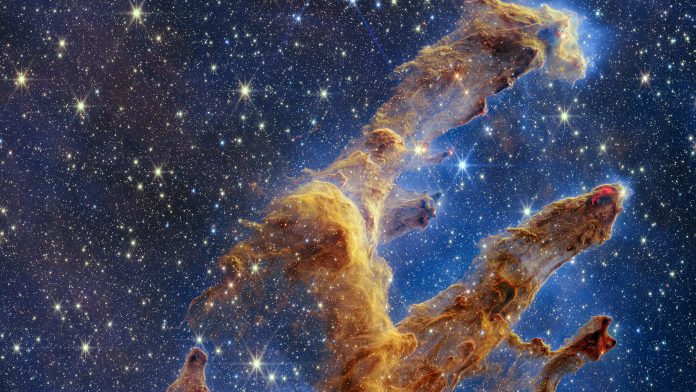 The James Webb space telescope continues to dazzle space lovers with its spectacular views of the cosmos. The latest image shared by the team at the European Space Agency includes the most detailed view of the Pillars of Creation we have ever seen.

The image, which was shared on December 1, 2022, is a composite created by combining images captured by both Webb’s Near-Infrared Camera (NIRCAm) and its Mid-Infrared Instrument (MIRI). The Webb team previously shared Webb’s view of the Pillars earlier this year. But, when combined together, the two captures give us the most detailed image of the Pillars of Creation ever taken.

The image truly is something else entirely. The long tendrils of gas and star debris that make up the pillars themselves look exquisite and haunting alongside the bright stars of the background, as well as those that pockmark the pillars themselves. If you’re a space buff, you have to see this detailed image of the Pillars of Creation yourself to truly understand why this region of space is so beloved.

The Pillars of Creation are part of the Eagle Nebula, a region of space just 6,500 to 7,000 light-years away from Earth. The Pillars themselves were first photographed by Hubble back in 1995, making them one of the most iconic images of a stellar entity in the past few decades. Now, though, with this new image, we’re finally seeing the most detailed view that we’ve ever captured.

James Webb has captured several iconic images like this, too, including Webb’s first images, which showed us parts of the universe in vivid color and detail that we hadn’t seen before. While Hubble continues to run and observe the universe, it’s clearly James Webb that has everyone’s eyes on it, waiting to see what spectacular images it will capture next.

Comet Leonard lights up the night sky this Christmas

Metaverse jobs are disappearing as hiring slows at Google, Facebook

Ensuring a More Inclusive Future for Indonesia through Digital Technologies

Crypto.com restarts withdrawals after suspending them over ‘suspicious activity’ that hit...

Peering at the edge of the universe