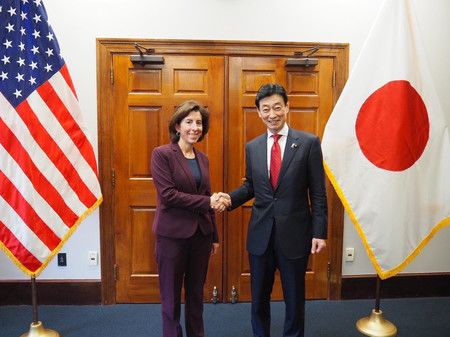 At a meeting in Washington, the two ministers also agreed to strengthen government support for an early commercialization of next-generation chips, a critical component of a digital society.

Nishimura told reporters after the meeting that he and Raimondo “agreed to further strengthen Japan-U.S. cooperation” for next-generation chips.

The two “discussed the importance of working together to promote and protect critical and emerging technologies,” according to a readout released by the Commerce Department.

Foreign and economy ministers from Japan and the United States, meeting for the first time last year, pledged to reconstruct a rules-based international economic order to counter China and Russia.

Elon Musk says SpaceX has shipped 100,000 dishes for its Starlink...

US outlines its vision for the Army of 2030

The Chips Act debate shows how far the Republicans have moved

Lunar Eclipse 2022: Date, Time of last chandra grahan of this...

Red Sox seek to reinvent the fan experience at America’s most...

Saudi Arabia to invest $6.4b in future technologies and entrepreneurship