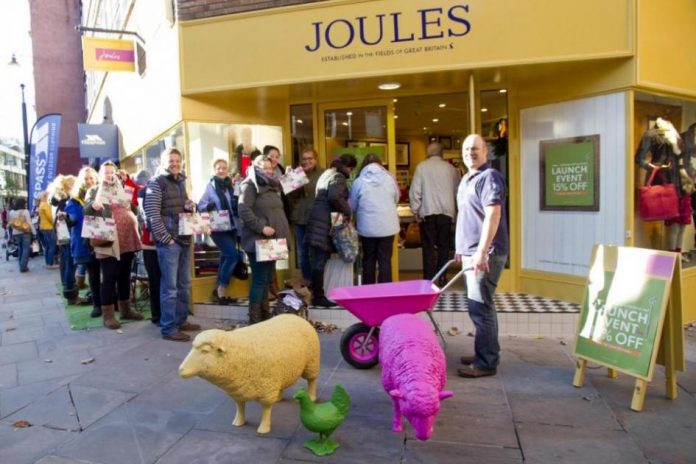 THE future of the city’s Joules clothing shop has been revealed after the clothing shop announced which stores it would be closing.

Now, the fashion brand has announced its plans to close 19 stores which would lead to a loss of 133 jobs.

However, the Worcester store located at 91 High Street, adjoining Copenhagen Street, will not be closing.

It will however be closing the doors of stores in towns and cities including Cheltenham and Chichester.

Next and Joules founder Tom Joule will take over the business after it went into administration last month.

Next said it plans to continue to run around 100 of Joules’s 124 stores and transfer over around 1,450 shop and head office workers.

The deal will see Next own a 74 per cent stake in the business, with Tom Joule owning the remaining 26 per cent.

The full list of shops that will close on Thursday is below.

Tom Joule, who is Joules’ chief brand officer, said: “After three years away from the operational side, I’m truly looking forward to inspiring teams with clear direction to excite and recapture the imagination of the customer again.

“I’m so pleased that we have been able to strike a deal that protects the future of the company for all its loyal customers, its employees, and also for the town of Market Harborough, which has been so central to Joules’s success.”

The company drafted in experts from Interpath Advisory last month after failing to secure emergency funding following a surge in costs and a slowdown in demand.

Will Wright, joint administrator and head of restructuring at Interpath, said: “We are pleased to have concluded this transaction, which secures the future of this great British brand, as well as safeguarding a significant number of jobs.

“To have achieved this in such a short timetable is a testament to the support we’ve received from employees, suppliers and other key stakeholders throughout the administration process, so we’d like to express our profound thanks to everyone involved.”

Dinosaur tracks from 113 million years ago emerge in Texas due...

SpaceX Dragon Splashes Down With Scientific Cargo for Analysis

Some families not leaving despite evacuation orders

Why Hardware Spending Remains on Top, Despite the Shift to Cloud