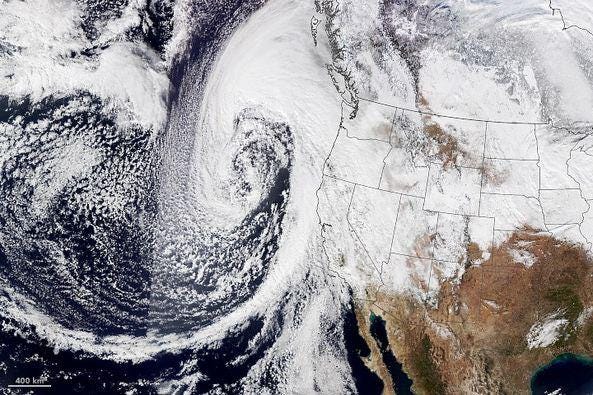 A series of “atmospheric rivers” have been impacting California over the past week. Such storms are common in this region during the cold season. Atmospheric rivers can be quite devastating from the perspective of flood-producing rainfall and extreme winds. However, they can also serve as “drought-relief.” According to federal agencies, 30 to 50% of total precipitation (rain and snow) in the western United States is produced by atmospheric river-related storms. While perhaps an unfamiliar term to many folks in the media and general public, scientists have known about them for some time. Unfortunately like the term “Polar Vortex,” atmospheric rivers have been mischaracterized in the media and many public narratives.

I tried to ignore it, but the atmospheric scientist in me could not let it go as I continued to see atmospheric rivers in mainstream outlets referred to as “firehoses, plumes or funnels” of rainfall. It reminded me of the times when people described the Polar Vortex as some type of Arctic hurricane. With the reach of traditional and social media, long-standing meteorological terms like Polar Vortex, derecho, bomb cyclone, and atmospheric river have entered the public lexicon. Inevitably, some of them have been mischaracterized.

The National Oceanic and Atmospheric Administration website defines atmospheric rivers (ARs) as, “Relatively long, narrow regions in the atmosphere – like rivers in the sky – that transport most of the water vapor outside of the tropics.” The key words in that definition are “water vapor.” The NOAA website goes on to say, “When the atmospheric rivers make landfall, they often release this water vapor in the form of rain or snow.” The strongest ARs can transport as much as 15 times the average flow of the water coming out of the mouth of the Mississippi River.

They are referred to as rivers because they are characterized, typically using satellite data, as ribbons of water vapor roughly 250 to 375 miles wide. The image below reveals the AR that impacted the West Coast on January 4th, 2023. It is revealed by high values of precipitable water, the total amount of water in a column if all the water vapor was condensed out as a liquid. The NASA Earth Facebook page notes, “A plume of moisture from the tropical Pacific interacted with a low-pressure system that rapidly strengthened over the northeast Pacific, producing a storm that caused flooding, toppled trees, and downed power lines.” The low pressure system strengthened rapidly over a 24-hour periods in a process called “bombogenesis.” In my satellite meteorology class at the University of Georgia, we had a robust lecture on atmospheric rivers and how they are identified using satellite-derived moisture and motion information.

In 2019, a team of scientists published a new scale for rating the impact and strength of atmospheric rivers. The UC San Diego press release said, “It ranks atmospheric rivers from 1 to 5 and creates the categories “weak,” “moderate,” “strong,” “extreme,” and “exceptional.” Water vapor associated with the atmospheric river over a 1-2 day period is the parameter used to categorize the storm. One unique aspect of this scale compared to the Saffir – Simpson (hurricanes) or Fujita scales (tornadoes) is that it conveys the nuance of whether the AR is potentially beneficial or destructive. The full scale can be seen at this link. The recent storms have ranged from level 3 to level 5, according to reports.

Yes, the storms ultimately produce significant precipitation at landfall through meteorological processes, orographic lift associated with mountains, and so forth. However, the basis for describing atmospheric rivers is the water vapor in the the plume. Hopefully, this essay will help refine how atmospheric rivers are described going forward.

By the way, you may hear the term “Pineapple Express.” What is that? NOAA’s Ocean Service website says it is, “A well-known example of a strong atmospheric river….moisture builds up in the tropical Pacific around Hawaii and can wallop the U.S. and Canada’s West Coasts with heavy rainfall and snow.” But not all ARs are the Pineapple Express. ARs can be found around the globe. Our research at the University of Georgia has even revealed the impact of ARs in the southeastern U.S.

Coinbase stock has potential to double in 2022 after plunging 90%...

People mistake the internet’s knowledge for their own

Smart glasses are getting ready for an iPad moment in 2022

Artemis I moon rocket is a step closer to launch countdown

Nebraska fire marshal determines cause of fires in Lancaster County

James Webb Telescope unveils a new view of the Pillars of...