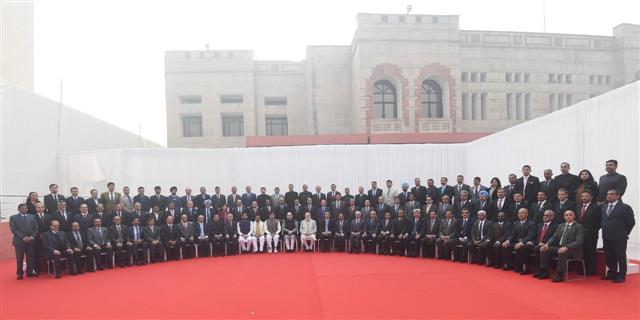 Stressing on the need for making the police forces more sensitive and training them in emerging technologies, Prime Minister Narendra Modi on Sunbday asked for greater cooperation between state law enforcement and central agencies.

Addressing top leadership of state and central police forces here at the conclusion of the three-day “All India Conference of Directors General (DGPs) and Inspectors General (IGPs)” the Prime Minister emphasised on the importance of ‘National Data Governance Framework’ for smoothening of data exchange across agencies.

“While we should further leverage technological solutions like biometrics etc., there is also a need to further strengthen traditional policing mechanisms like foot patrols etc,” the PM said, adding that it was highly recommended that “we should strive for repealing obsolete criminal laws and building standards for police organisations across states”.

Modi, according to an official statement issued by the PMO, also suggested prison reforms to improve jail management. He also discussed strengthening the border as well as coastal security by organising frequent visits of officials, it added.

Asking for replicating the model of the DGPs and IGPs Conference at the state and district levels, the Prime Minister said this would help the forces at the grass root level to discuss “emerging challenges and evolving best practices”.

The Conference was concluded after Prime Minister distributed Police Medals for Distinguished Services.

“The Conference covered various aspects of policing and national security, including Counter Terrorism, Counter Insurgency and Cyber Security,” the PMO said in the statement.

Meteor races across the Front Range sky on Friday night

Recode by Vox to Launch Week-Long Coverage on Tech’s Role in...