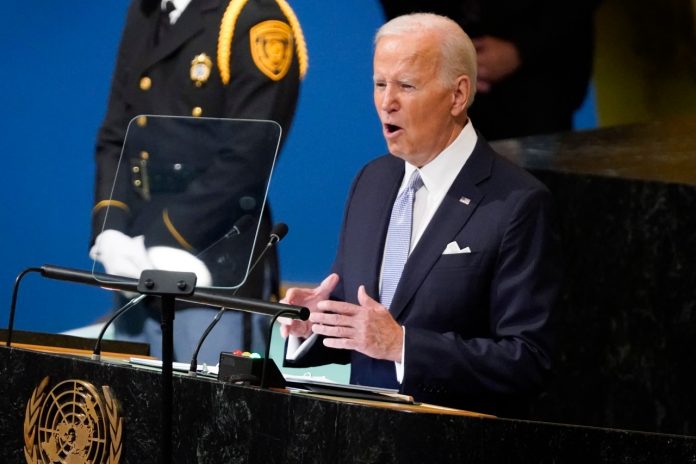 Kyiv and its military forces are less than a month away — Feb. 3 — from the midway point between the Winter Solstice and Spring Equinox. During the lead-up to winter, Russian President Vladimir Putin, in an effort to revive his faltering war in Ukraine, began pursuing a two-track approach: weaponizing winter against civilians throughout Europe and, as NATO Secretary General Jens Stoltenberg warned in early December, “trying to freeze [the] Ukraine conflict.” In regard to the latter, Putin has an unwitting ally in the Biden administration.

Since the war began, we and others have called upon President Biden repeatedly to overcome his pervasive “escalation paralysis” and fully equip Ukraine with the strategic military equipment and capabilities it needs to defend itself and expel Russian forces from its territories, including Crimea. To date, the Biden administration has not heeded persistent calls, including from former Secretary of State Condoleezza Rice and former Defense Secretary Robert Gates, who noted, “time is not on Ukraine’s side.”

Time may or may not be on Ukraine’s side. Retired Army Lt. Gen. Ben Hodges, former commander, United States Army Europe, strongly believes it is — and pushed back forcefully against Rice and Gates, tweeting, “Nonsense!” Regardless, winter is working against Kyiv, at least in terms of freezing the conflict “as is” and giving Moscow time to reorganize, resupply, and field newly mobilized, though poorly trained and led, troops. Heavy fighting in and around Bakhmut and Soledar is evidence enough of a frozen battlefront and just how deadly — reminiscent of World War II trench warfare carnage — it is becoming, despite neither side gaining game-changing ground as a result of ongoing pitched battles.

Hodges is a proponent of retrofitting Ukraine’s High-Mobility Artillery Rocket System (HIMARS) and equipping them with longer-range munitions such as ATACMS to decisively break the winter stalemate in Donbas in Kyiv’s favor; however, Biden’s prevailing “just enough” doctrinal strategy and modifications on U.S.-provided HIMARS to restrict their use to less than 50 miles preclude this. Thus, although Ukrainian President Volodymyr Zelensky is competitive in his fight against Putin, he lacks the weapon suites and munition ranges necessary to shape the battle and set the conditions to win outright against Russia. Biden has contained the battlefield to within Ukraine’s borders, handicapping Zelensky.

This begs the question of why Biden persists in an almost purgatory-like approach to the war in Ukraine. Since day one, Zelensky has made it clear that he and Ukraine are in this war to win. It’s a point he made clear to Biden when he rejected a U.S. offer to evacuate him, saying, “I need ammunition, not a ride.” Moreover, Biden, is allowing the war to devolve into a “forever war” at great cost of lives and treasure, which is particularly perplexing given his stated reasons for exiting Afghanistan. It weakens Russia, but at Ukraine’s expense.

It also raises the question of why Biden appears to be afraid for Kyiv to win — and why, wittingly or not, he is enabling Putin to freeze the battlefields to Moscow’s advantage. Ukraine is not afraid of winning, as their military forces have demonstrated in retaking Kharkiv, Kherson, and now Bakhmut. Nor are the Ukrainian civilians we interviewed, including 4-year-old Daryna and her 10-year-old brother Ivan, along with their mother Kateryna, who are daily braving Putin’s drone attacks in Kyiv and using flashlights in cold bomb shelters during school hours, but dancing and fencing in the evening by candlelight to maintain some level of childhood normalcy.

Notably, since Russian General Sergey Surovikin assumed overall command in Ukraine in October, Russia slowly is adapting to Kyiv’s military tactics and strategies and beginning to tactically understand the range limitations of Western weaponry imposed upon Kyiv by Biden and Washington’s NATO allies. As a result, Russia’s military command appears to be proactively repositioning its forces — particularly, military command posts — outside of the current ranges of HIMARS and similar Western artillery systems.

Consequently, Biden’s rules have reduced Ukraine to launching symbolic drone strikes with old Russian weapons against the Engels-2 airbase 600 kilometers inside of Russia and to opportunistic attacks when Russian forces expose themselves, either due to poor battlefield tactics or operational security. Both produce casualties and headlines but neither will win the war. Nor will they stop Moscow from amassing new forces, potentially to launch a spring  offensive against Ukraine.

Biden and NATO must stop imposing heretofore unheard of “rules of the game” on Kyiv, especially as its civilian centers and people such as Daryna, Ivan and Kateryna are under attack. Handicapping Ukraine in this manner encourages and empowers Russia to continue its ruthless bombardments, thereby prolonging the war and human suffering.

If Ukraine is to prevail, the war cannot be restricted to the inside of Ukraine’s borders. It must extend to wherever Russian military combatants launch strikes, be it Russia, Belarus, the Black Sea, or the Sea of Azov. The Kremlin’s military targets are fair game — airfields, cruise missile and drone launch points, ammunition and supply depots, rail transport lines, barracks and regional and district operational headquarters.

Putin is not standing still; nor can Biden. The Kremlin has announced Moscow is committed to building a 1.5-million-man army and that in 2023 Russia will increase defense spending by 50 percent. Yet, target-rich opportunities exist in the here and now, if only Biden will free Zelensky to chase them, just as Ukraine did in attacking a Russian military base in occupied Makiyivka in the Donetsk Oblast. Reportedly, 400-plus Russian soldiers died.

Too much respect is being afforded to Putin and Russia and their possible reactions. The West seems to be more concerned about what Russia may do, versus what it is doing now. Whether intentional or not, Biden’s military policies toward Ukraine are constraining Zelensky and Kyiv’s ability to shape and win the battlefields of this war. Freezing those same battlefields during winter to Putin’s advantage is unconscionable and unacceptable. Doing so allows Moscow to build combat power.

As Ukraine fights for its national survival in the dead of winter, it is well past time for Biden to fully recognize and embrace what Gen. George S. Patton understood long ago: “There is no such thing as a successful defense” and that “artillery wins wars.” If “Old Blood and Guts” were alive today, he would be screaming at Biden to “praise HIMARS and pass the ATACMS ammunition.” Patton is not; so, respectfully, we will. Mr. President, ice out Putin and unfreeze this battlefield and equip Kyiv with what Ukraine needs to decisively win.

Mark Toth is a retired economist, historian and entrepreneur who has worked in banking, insurance, publishing, and global commerce. He is a former board member of the World Trade Center, St. Louis, and has lived in U.S. diplomatic and military communities around the world, including London, Tel Aviv, Augsburg, and Nagoya. Follow him on Twitter @MCTothSTL.

Jonathan Sweet, a retired Army colonel, served 30 years as a military intelligence officer. His background includes tours of duty with the 101st Airborne Division and the Intelligence and Security Command. He led the U.S. European Command Intelligence Engagement Division from 2012-14, working with NATO partners in the Black Sea and Baltics. Follow him on Twitter @JESweet2022.

Is government up to the task of regulating Facebook?

Why Singapore is one of the most crypto-friendly countries

Wordle Archive lets you binge past Wordles, test your self-control

The 7 most spectacular images from the James Webb Space Telescope’s...

‘Hwy 101 is open!’ Road reopens though nearby wildfire continues to...