On Tuesday, a joint teleconference between NASA and Boeing officials was held on the current status of Orbital Flight Test-2 (OFT-2) after a valve anomaly prevented its launch in August. While work to confirm the root cause of the issue continues, the launch target for OFT-2 remains in the first half of 2022, with a Crewed Flight Test (CFT) about six months later.

The Boeing teams have removed two of the three valves from Service Module-2, with a third planned to be removed soon.  These three valves will then be shipped to NASA’s Marshall Space Flight Center, located in Huntsville, Alabama. Once there, these valves will undergo a Computed Tomography (CT) scan and will be disassembled, as Boeing teams have yet to find a root cause for the issue.

Testing is also occurring at NASA’s White Sands Test Facility. “They have started some testing on two valves which we started back in September, a long-term oxidizer exposure without moisture,” said Steve Stich, manager of NASA’s Commercial Crew program. “We’ll get some other valves out to White Sands and put them through a bunch of paces to replicate the environment in the C3PF and then also at the at the VIF.”

Not long after Starliner arrived back at the Commercial Crew and Cargo Processing Facility (C3PF) in August, Boeing teams found the most likely cause of the valve anomaly which was an interaction between humidity and the oxidizer in the valves of Service Module-2. This combination of moisture and oxidizer formed nitric acid and “corrosion products” that caused the valves to get stuck closed.

⁦@NASASpaceflight⁩: “How is the team able to begin repairing the (valve) system when the root cause isn’t fully identified, and what does the current repair process for Starliner look like?”

With the spacecraft in the C3PF, teams were able to remove panels on Service module-2, which gained them more access to the valves in question. Additional troubleshooting efforts were made which included additional heating and higher voltages to the exterior of the valves.

“We believe our quickest path back to launch is to use Service Module-2 again,” said Michelle Parker, Chief Engineer for Boeing Space and Launch, “assuming that we can do that in a safe manner that ensures the operation of the vehicle now that we’ve continued to look at remediation efforts there including adding desiccant to the valves to prevent further moisture ingression as well at looking at adding heaters.”

John Vollmer, Boeing’s Vice President and Program Manager of the Commercial Crew program stated that they are still targeting the first half of 2022 for the launch of OFT-2. The launch of the first crewed flight, CFT, will follow afterward.

“Our first focus will be on making sure we can get ready to launch successfully. And after that we’ll look at the CFT schedule,” said Vollmer. “We would like to see six months between flights.”

Boeing’s CST-100 Starliner, atop an Atlas V N22 rocket, first rolled out for the OFT-2 mission from the Vertical Integration Facility (VIF) at SLC-41 at Cape Canaveral on July 29. Starliner quickly returned to the VIF after a thruster incident on the ISS caused by the Russian Nauka Multipurpose Laboratory Module on the same day.

The Atlas V N22 was then rolled back out to SLC-41 on August 2 for a planned launch attempt the next day.

“We were on the launch pad, we were progressing through our countdown launch procedure through nominal operations, and about four and a half hours prior to launch is a standard cycling of the valves that’s just part of our normal launch countdown procedure.,” said Parker.  “And at that time, we had 13 of the 24 valves which would not cycle for us.”

This valve issue scrubbed the launch attempt. Teams at Boeing attempted to troubleshoot the anomaly at the launch pad, but this was not successful.

The launch vehicle was later rolled back to the VIF, where engineering teams powered on the spacecraft and attempted to open 13 closed valves located in the service module’s propulsion system. These valves are used for both abort and on-orbit maneuvering.

“We were able to free 9 of those 13 stuck valves, so through a combination of higher voltages and some external power to the valves and some heating…at the end of the day, there were four [valves] that remained in this stuck configuration that we were unable to free at the vertical integration facility and we, therefore, decided to roll back to the factory which is where we are now,” said Parker.

After being demated from the Atlas V stack, Starliner made the journey back from SLC-41 to the Commercial Crew and Cargo Processing Facility (C3PF) at NASA’s Kennedy Space Center on August 19. The C3PF was formerly used for the space shuttle program as Orbiter Processing Facility 3 (OPF-3), which was the home of Shuttle Discovery after the loss of Columbia. The facility is used today as the home of Boeing’s two-spacecraft fleet of CST-100 Starliners.

The dual-engined Centaur was later also de-stacked from the Atlas V booster inside the VIF.  The same first-stage booster was eventually used on NASA’s flagship Lucy mission. AV-096 launched in the 401 configuration on October 16.

On October 6, NASA announced two crew reassignments for two planned Starliner missions. Nicole Mann and Josh Cassada were reassigned to the SpaceX Crew-5 mission, which is currently scheduled to launch no earlier than the fall of 2022 to the International Space Station. 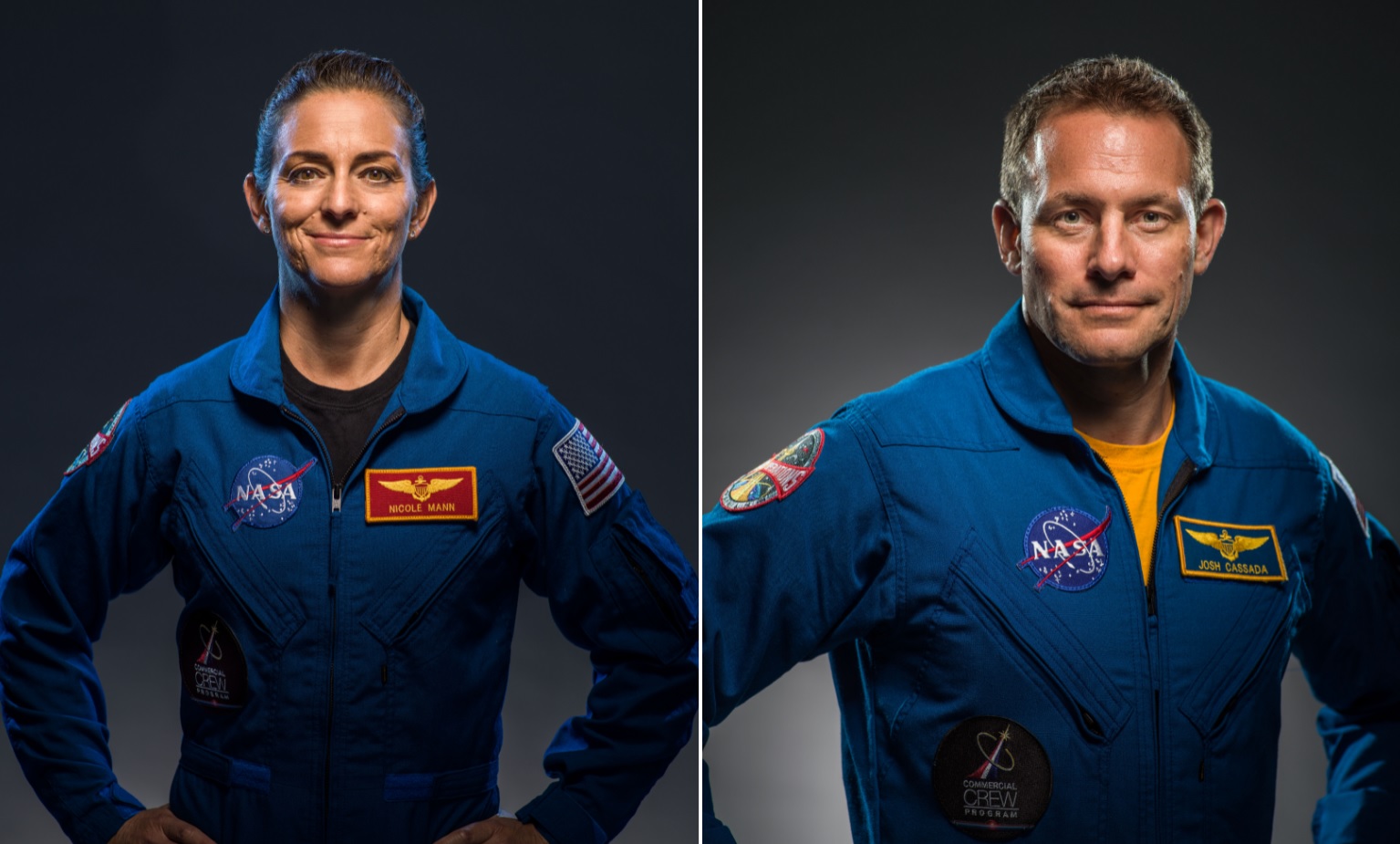 Nicole Mann and Josh Cassada, previously assigned to Boeing CFT and Starliner-1 respectively, have now been reassigned to SpaceX Crew-5 – via NASA

For Crew-5, Mann will command the Crew Dragon spacecraft, while Cassada will be the pilot.

Mann, a colonel in the U.S. Marine Corps, was originally assigned to the Boeing CFT mission. She was the last astronaut remaining from the original CFT mission roster, which also originally included Boeing astronaut Chris Ferguson and NASA astronaut Eric Boe.

The crew for CFT currently consists of Commander Barry Wilmore and Pilot Michael Fincke. The Mission Specialist role, previously held by Mann, is still to be determined. CFT is similar to the SpaceX Demo-2 mission.

Cassada was originally assigned to the Starliner-1 mission, as the pilot. The flight will be the first operational mission for Starliner, similar to the SpaceX Crew-1 mission. Currently, NASA astronaut Sunita Williams is the spacecraft commander, while Jeanette Epps currently serves the role of Mission Specialist-1.

(Lead image: Starliner rolled out at SLC-41 before the launch of OFT-2 was scrubbed – via Stephen Marr for NSF/L2)

2 years of drought in Colorado has turned April into June...

Could Ethereum help you retire early?

10 Days After Its Launch, Orion Has Successfully Entered Lunar Orbit...