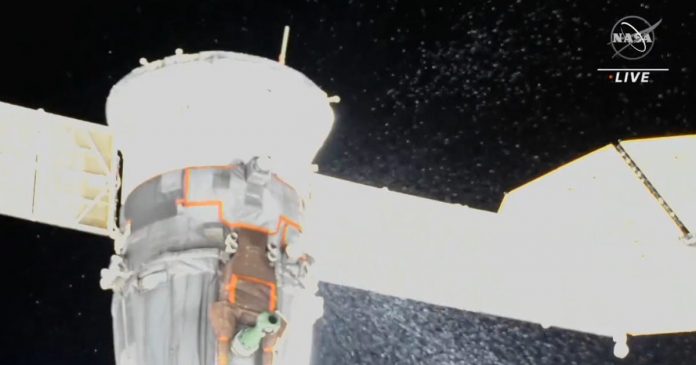 Three residents of the International Space Station are facing an uncertain future after a Russian Soyuz capsule sprung a dramatic coolant leak in December that’s threatened the craft’s space-worthiness. The investigation continues, but NASA is pondering ways to bring the affected crew home. It’s possible SpaceX could play a role.

NASA said in a statement last week that it “reached out to SpaceX about its capability to return additional crew members aboard Dragon if needed in an emergency, although the primary focus is on understanding the post-leak capabilities of the Soyuz MS-22 spacecraft.” SpaceX didn’t immediately respond to a request for comment.

NASA astronaut Frank Rubio and Russian cosmonauts Sergey Prokopyev and Dmitry Petelin rode the Soyuz MS-22 to the station last year and were scheduled to take it back to Earth in March. NASA and Russian space agency Roscosmos are reviewing the cause of the leak, which may have been from a tiny meteorite, and are evaluating how to proceed.


SpaceX has launched a string of successful Crew Dragon missions to the ISS, so it’s conceivable it could send a spacecraft equipped to bring the three crew members home. However, SpaceX makes custom suits for its Dragon riders, so it’s not as simple as just sending a spacecraft up. Any SpaceX-based rescue might also have a major impact on other scheduled ISS missions, like the upcoming SpaceX Crew-6 mission set for an early 2023 takeoff.

Other possible ways forward could involve using MS-22 as planned if it’s deemed safe, or Russia could potentially send up a replacement Soyuz spacecraft.

“NASA and Roscosmos are continuing to conduct a variety of engineering reviews and are consulting with other international partners about methods for safely bringing the Soyuz crew home for both normal and contingency scenarios,” NASA said. The agencies are expected to make a decision on the dilemma sometime this month.

The 10 Most Disruptive Technologies To Watch In 2022

How America’s weirdly warm winter could make us sick

NASA halts Mars comms as Sun gets in way of Red...