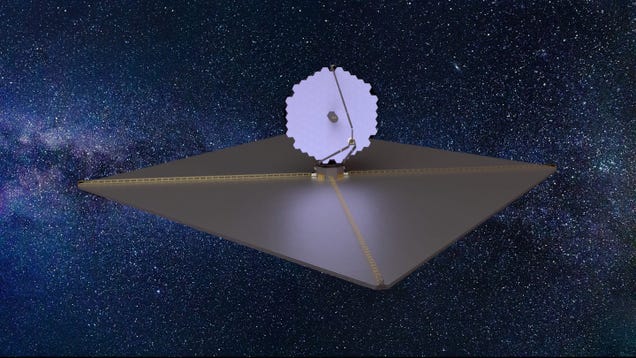 An artist’s concept of LUVOIR, a 15-meter telescope that was an early NASA concept for a future space telescope. The newly described Habitable Worlds Telescope wouldn’t be quite as large as this.

NASA officials disclosed information about a planned next-generation space telescope, the Habitable Worlds Observatory, during a recent session of the American Astronomical Society,

In the session, Mark Clampin, the Astrophysics Division Director NASA’s Science Mission Directorate, offered a few details about the telescope, which could be operational in the early 2040s.

The need for such an observatory is outlined in the National Academies of Sciences, Engineering, and Medicine’s decadal survey on astronomy and astrophysics, a report assembled by hundreds of industry experts that serves as a reference document for the fields’ future goals.

One of the key findings of the most recent decadal survey was the necessity of finding habitable worlds beyond our own, using a telescope tailored specifically for such a purpose. The report suggested an $11 billion observatory—one with a 6-meter telescope that would take in light at optical, ultraviolet, and near-infrared wavelengths. (Hubble Space Telescope sees mostly in optical and ultraviolet light, while the more recently launched Webb Space Telescope images at mid-infrared and near-infrared wavelengths.)

The authors of the decadal survey suggested the Habitable Worlds Observatory as the first in a new Great Observatories program; basically, the linchpin in the next generation of 21st-century space telescopes. As Science reported, the decadal report’s suggestion of an exoplanet-focused space telescope falls somewhere between two older NASA proposals, telescope concepts named HabEx and LUVOIR.

Exoplanets are found with regularity; it’s finding worlds with conditions that can host life as we know it that’s tricky. Webb has spotted exoplanets and deduced aspects of their atmospheric chemistry, and other telescopes (even planned ones, like the Roman Space Telescope) are turning their gaze toward these alien worlds.

An artist’s impression of the exoplanet LHS 475 b, recently discovered by Webb, and the star it orbits.

Unlike other telescopes—both operational and those still on the drawing board—the planned Habitable Worlds Observatory would look specifically for so-called Goldilocks planets, worlds with conditions that could foster life.

The search for extraterrestrial life is a relentless goal of NASA. The Perseverance rover on Mars is collecting rock samples on Mars to learn, among other things, whether there’s any evidence for ancient microbial life in a region of the planet that once was a flowing river delta. (An environment, it’s important to note, that scientists believe was similar to that where Earth’s first known life materialized.)

Beyond Mars, scientists harbor hope that future probes can poke around for signs of life in the subsurface ocean on Jupiter’s moon Europa or the methane sea on Saturn’s moon Titan.

But those are just venues—and hostile ones, compared to Earth—within our solar system. Missions like TESS and the Kepler Space Telescope have detected thousands of exoplanets, but the fraction that are Earth-like is vanishingly small.

Like the Webb telescope, the future observatory will be located at L2, a region of space one million miles from Earth that allows objects to remain in position with relatively little fuel burn. (By saving fuel, the missions’ lifespans are prolonged.)

As reported by Science, Clampin said that the Habitable Worlds Observatory would be designed for maintenance and upgrades, which Webb is not. That could make the next observatory a more permanent presence in NASA’s menagerie of space telescopes.

Hubble was famously serviced by humans in low-Earth orbit multiple times, due to a number of mechanical snafus and issues that have arisen over the telescope’s 32-year tenure in space.

The Habitable Worlds Observatory repairs and upgrades (which would take place a million miles from Earth—a little far for human repairs) would be done robotically, more in the style of a Star Wars droid than a hand from the IT department.

Space News reported that NASA will imminently begin seeking out nominations for people to join the Science, Technology, Architecture Review Team (START) for the new observatory. The first phase of the observatory’s development is slated for 2029.

In November, Clampin told a House subcommittee that the Webb telescope had suffered 14 strikes from micrometeoroids—very small bits of fast-traveling space rock that can damage the telescope’s mirrors. Clampin said the NASA team was “making some operational changes to make sure we avoid any future impacts,” and the telescope was slightly repositioned to reduce the risk of future strikes.

One of the telescope’s mirror segments was damaged by a micrometeoroid strike, but an analysis by the team found the telescope “should meet its optical performance requirements for many years.”

Of paramount importance to the astronomical community is that the budget and timeline of the new observatory stay on track. The Webb project was years late and way over budget. Space News reports that some scientists are calling for an expedited timeline that could see the Habitable Worlds Observatory launch by 2035.

The ball is well and truly rolling on the telescopes of the future. The question is how Sisyphean the roll of the ball will be.

The worst Apple product of 2022 was an obvious choice

In a summer of extreme weather events, a simultaneous great drought...

Why did the T-Rex have tiny arms? – study