The North Fork of the Kaweah River, which flows from Sequoia National Park, is seen swollen with frothy, black water Monday in Three Rivers, California.

SAN FRANCISCO — A powerful atmospheric river storm that swept through California set rainfall records and helped douse wildfires. But it remained to be seen how much of a dent it made in the state’s drought.

The weather system weakened as it moved south but still dropped enough rain Monday evening to cause mudslides that closed roads in the San Bernardino Mountains northeast of Los Angeles.

The atmospheric river storm, a long and wide plume of moisture pulled in from the Pacific, came ashore in Northern California over the weekend.

Drenching rains caused widespread flooding and rock slides. Strong winds knocked down trees and toppled two big trucks on the Richmond-San Rafael Bridge near San Francisco. Pacific Gas & Electric reported 646,000 homes and businesses lost power, though most had it back by Monday.

By early Tuesday, light rain and snow was still falling in northern parts of California and the lone remaining flood warning was in Sonoma County north of San Francisco, where stream levels were slow to fall. 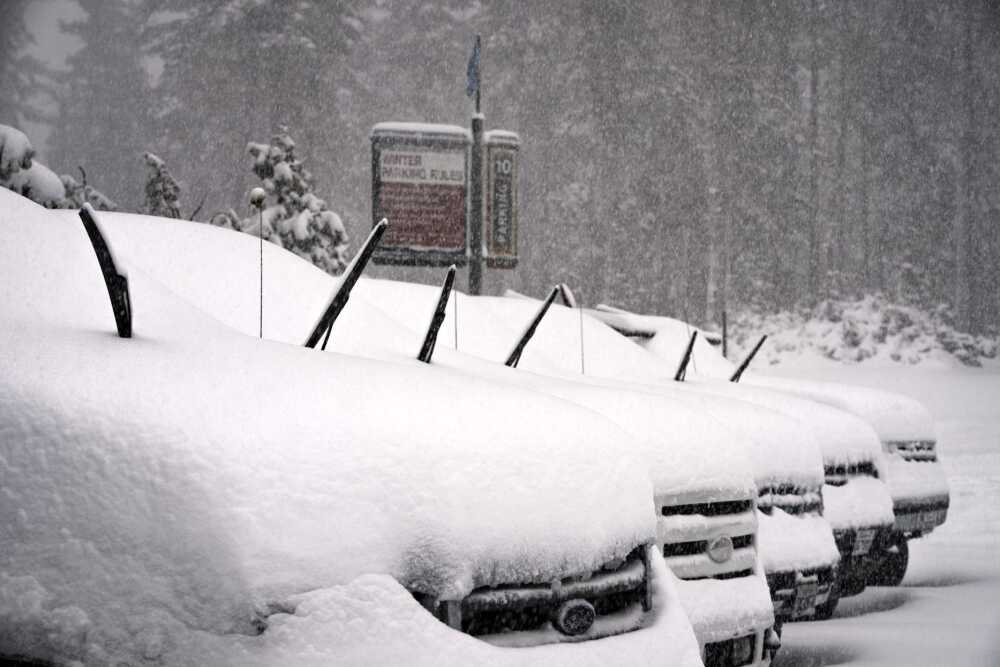 Falling snow collects on cars in a parking lot at Mammoth Mountain on Monday in Mammoth Lakes, California.

Despite the problems, the rain and mountain snow were welcome in Northern California, which is so dry nearly all of it is classified as either experiencing extreme or exceptional drought.

The wet weather also greatly reduces the chances of additional wildfires in a region that has borne the brunt of another devastating year of blazes in the state.

The National Weather Service called preliminary rainfall totals from the storm “staggering.” Four inches fell Sunday in downtown San Francisco, making it the fourth-wettest day on record for the city.

“It’s been a memorable past 24 hours for the Bay Area as the long talked-about atmospheric river rolled through the region,” the local weather office said Monday. “We literally have gone from fire/drought conditions to flooding in one storm cycle.”

Get our Daily Headlines

Sent right to your inbox.

Northeast of San Francisco, 5.44 inches fell on downtown Sacramento, shattering the one-day record for rainfall that had stood since 1880.

Interstate 80, the major highway through the Sierra Nevada Mountains to Reno, Nevada, was closed by heavy snow early Monday. In California’s Colusa and Yolo counties, state highways 16 and 20 were shut for several miles because of mudslides, the state Department of Transportation said.

The same storm system also slammed Oregon and Washington state, causing power outages affecting tens of thousands of people. Two people were killed when a tree fell on a vehicle in the greater Seattle area.

Water levels at Lake Oroville, a major Northern California reservoir, rose 20 feet over the past week, according to the state’s Department of Water Resource. Most of the increase came between Saturday and Monday during the height of the storm, KHSL-TV reported.

Justin Mankin, a geography professor at Dartmouth College and co-lead of the Drought Task Force at the National Oceanic and Atmospheric Administration, said the cycle of going from years-long drought to record-breaking downpours is expected to continue because of climate change.

“While this rain is welcome, it comes with these hazards, and it won’t necessarily end the drought,” Mankin said. “California still needs more precipitation, and it really needs it in high elevations and spread out over a longer time so it’s not hazardous.”

Christy Brigham, chief of resource management and science at Sequoia and Kings Canyon National Parks, said the rain was a big relief after the Caldor Fire torched an unknown number of the giant trees in the park, along with thousands of pines and cedars.

“This amount of rainfall is what we call a season-ending event,” Brigham said. “It should end fire season, and it should end our need — to a large degree — to fight this fire.”

The Caldor Fire has burned for more than two months and in early September prompted the unprecedented evacuation of the entire city of South Lake Tahoe, a major tourism destination. Firefighters now consider the fire fully contained. That status also now applies to the Dixie Fire, the second-largest in state history at just under 1,563 square miles.

Over the weekend, the California Highway Patrol closed a stretch of State Route 70 in Butte and Plumas counties because of multiple landslides within the massive Dixie Fire burn scar.

Cal Fire, the state firefighting agency, did not declare the wildfire season over or cut staffing to lower winter levels.

“We’d like to see some more rain coming our way before we look at reducing staffing,” spokesman Isaac Sanchez said.

“To end different aspects of the drought, you are going to need a situation where parts of California get precipitation over the next three months that’s about 200% of normal,” he said, adding that “despite this really, really insane rainfall, the winter is probably going to be drier than average.”

Mega asteroid 'could come dangerously close with Earth in 2052', say...

She’s escaped death while chasing storms, but ‘lost most everybody’ after...

How Do Spacecraft Slow Down? [Video]

Storm riders: why Hong Kong loves a day off when typhoons...