TORONTO — Hundreds of thousands of people in Atlantic Canada remained without power Sunday and officials said they found the body of a woman swept into the sea after former Hurricane Fiona washed away houses, stripped off roofs and blocked roads across the country’s Atlantic provinces.

Defense Minister Anita Anand said troops would help remove fallen trees, restore transportation links and do whatever else is required for as long as it takes.

Fiona was blamed for at least five deaths in the Caribbean, and one death in Canada. Authorities found the body of a 73-year-old woman in the water who was missing in Channel-Port Aux Basques, a town on the southern coast of Newfoundland.

Police said the woman was inside her residence moments before a wave struck the home Saturday morning, tearing away a portion of the basement. The Royal Canadian Mounted Police said in a release on social media that with assistance from the Canadian Coast Guard, as other rescue teams her body woman was recovered late Sunday afternoon. 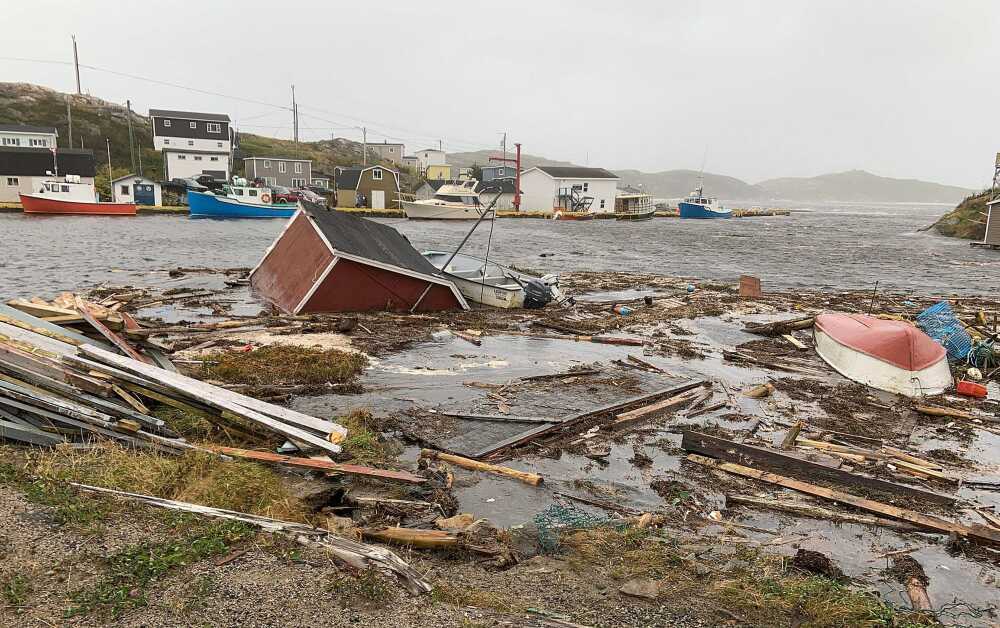 “Living in coastal communities we know what can happen and tragically the sea has taken another from us,” said Gudie Hutchings, the Member of Parliament from Newfoundland.

As of Sunday evening, more than 211,000 Nova Scotia Power customers and over 81,000 Maritime Electric customers in the province of Prince Edward Island — about 95% of the total — remained in the dark. So were more than 20,600 homes and businesses in New Brunswick.

More than 415,000 Nova Scotia Power customers — about 80% in the province of almost 1 million people — had been affected by outages Saturday.

Utility companies say it could be days before the lights are back on for everyone.

Cape Breton Regional Municipality Mayor Amanda McDougall said Sunday that over 200 people were in temporary shelters. Over 70 roads were completely inaccessible in her region. She said she couldn’t count the number of homes damaged in her own neighborhood.

Get each day’s latest first thing in the morning.

She said it was critical for the military to arrive and help clear debris, noting that the road to the airport is inaccessible and the tower has significant damage.

McDougall said it is amazing there are no injuries in her community.

“People listened to the warnings and did what they were supposed to do and this was the result,” she said

Prince Edward Island Premier Dennis King said that over 100 military personnel would arrive Sunday to assist in recovery efforts. Schools will be closed Monday and Tuesday. He said many bridges are destroyed.

“The magnitude and severity of the damage is beyond anything that we’ve seen in our province’s history,” King said, and that it would take a “herculean effort by thousands of people” to recover over the coming days and weeks.

Kim Griffin, a spokeswoman for Prince Edward Island’s electricity provider, said it would likely take “many days” to restore power across the island.

“The sense on the street is one of shock and awe over the magnitude of the storm,” said Sean Casey, a member of parliament who represents Charlottetown on Prince Edward Island. He added that locals are also determined to mount a recovery effort. A long line quickly formed after the first gas station opened in his community on Sunday afternoon.

“Everywhere you go around town you hear generators and chain saws,” Casey said.

Bill Blair, minister of emergency preparedness, said the federal government would also send approximately 100 military personnel to Newfoundland and Labrador as it shifts to recover from the storm.

“This is not a one-day situation where we can all go back to normal,” Mayor Brian Button said on social media. Unfortunately, this is going to take days, it could take weeks, it could take months in some cases.”

Much of the town of 4,000 had been evacuated and Button said asked for patience as officials identify where and when people can safely go home. He noted that some residents are showing up at barricades angry and wanting to return.

In Puerto Rico, too, officials were still struggling to grasp the scope of damage and to repair the devastation caused when Fiona hit the U.S. territory a week ago.

As of Sunday, about 45% of Puerto Rico’s 1.47 million power customers remained in the dark, and 20% of 1.3 million water customers had no service as workers struggled to reach submerged power substations and fix downed lines.

Gas stations, grocery stores and other businesses had temporarily shut down due to lack of fuel for generators: The National Guard first dispatched fuel to hospitals and other critical infrastructure.

“We’re starting from scratch,” said Carmen Rivera as she and her wife mopped up water and threw away their damaged appliances, adding to piles of rotting furniture and soggy mattresses lining their street in Toa Baja, which had flooded.

Officials across Eastern Canada also were assessing the scope of damage caused by the storm, which had moved inland over southeastern Quebec.

Mike Savage, mayor of Halifax, said the roof of an apartment building collapsed in Nova Scotia’s biggest city and officials had moved 100 people to an evacuation center. He said no one was seriously hurt.

The Canadian Hurricane Centre tweeted that Fiona had the lowest pressure — a key sign of storm strength — ever recorded for a storm making landfall in Canada.

Nothing phone (1) hands-on shows how it plans to illuminate the...

Celebrities Can Live Forever Thanks to Technology, but Is That a...