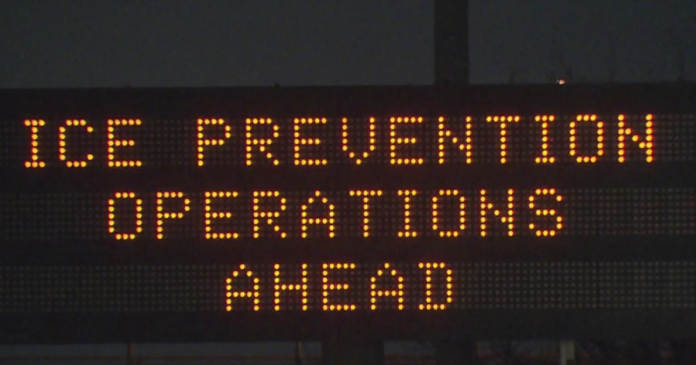 NORTH TEXAS (CBSDFW.COM) – The winter weather could impact travel on Tuesday, with cold rain during the morning commute and the potential for snow on the drive home.

“It’s been relatively warm up till this point, so we’re expecting the ground to insulate the main lanes for the most part,” said Val Lopez with TxDOT’s Fort Worth District. “But it’s those elevated surfaces that are exposed, that are vulnerable to icing over, and that’s what we’re focusing on today.”

The brine, which is a mixture of salt and water, basically acts as anti-freeze.

“So our principle goal here it to make sure the ice doesn’t bond onto the roadway,” Lopez said. “Once it bonds onto a bridge deck, it becomes very difficult to remove. The brine is a very useful tool, one of the tools in our tool box, to help prevent that ice from bonding onto our roadways.”

The TxDOT Dallas District treated treating bridges in Collin, Denton, Rockwall and Dallas counties starting Monday morning, as well as U.S. 80 in Kaufman County and I-20 to Terrell.

TxDOT crews will be in 24/7 monitoring mode until the weather passes and the threat of ice is over.

“We will continue to monitor the roadways,” said Lopez. “There is a transition point where we go from preventative to actively treating. At that point, typically our products and procedures do change. Instead of applying brine, we will start to use granular product – sand, salt, salt-based deicers, chemical deicers.”

The North Texas Tollway Authority is holding off on applying brine to the highways it monitors but will be in position to spread salt if/when temperatures dip near freezing.

The City of Fort Worth is not pretreating with brine either.

“So typically on a day like this when winter weather is anticipated, we’ll have the trucks come in at the end of their shift and they’ll load up sand spreaders and be prepared to respond in case there’s any accumulation,” said Timothy Moreno, the Fort Worth Transportation & Public Works superintendent. “We hope we don’t have to use them, but we are prepared in case we do.”

If the winter storm turns into a larger event, Fort Worth will call everyone back in.

“It will turn into an all hands-on deck event, prepared to use all our resources and work around the clock until the event is over,” Moreno said.

Although the City of Dallas does not pre-treat roads and bridges, Public Works (PBW) and Dallas Water Utility’s Stormwater Operations (DWU) will have trucks monitoring roads and bridges and will sand if necessary.

The TEXpress Lanes System, which covers more than 100 miles of TEXpress lanes on eight North Texas roadways, has activated its “Winter Maintenance program” and “will be continually monitoring the corridors for changing conditions.”

Caroline Vandergriff joined the CBS 11 News team in September 2019. She grew up in Arlington (go Lamar Vikings!), and is thrilled to be back home in North Texas.

Game of Thrones star Emilia Clarke is missing ‘quite a bit’...