NVIDIA’s generalist AI agent has won itself an award for playing Minecraft, well, performing actions from written prompts, at the recent NeurIPS conference.

The AI agent won the Outstanding Datasets and Benchmarks Paper Award at the 2022 NeurIPS (Neural Information Processing Systems) conference, with NVIDIA researchers pumping a huge 730,000 videos of Minecraft from YouTube into training the MineDojo framework to play Minecraft.

Using this, someone can tell a MineDojo agent to do whatever they want in Minecraft using high-level natural language. This includes things like “find a desert pyramid” or something like “build a nether portal and enter it”. After those commands are given, MineDogo will perform the instructions in a series of steps, inside of Minecraft. Very cool. 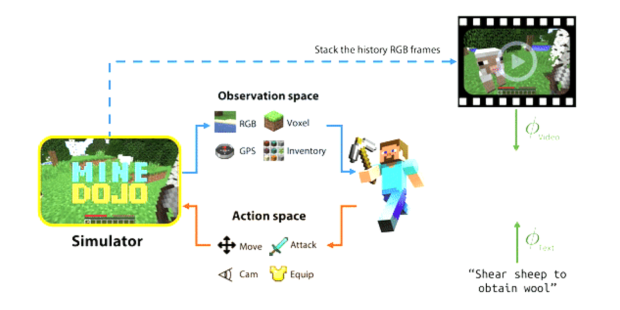 NVIDIA explains: “While researchers have long trained autonomous AI agents in video-game environments such as StarCraft, Dota, and Go, these agents are usually specialists in only a few tasks. So NVIDIA researchers turned to Minecraft, the world’s most popular game, to develop a scalable training framework for a generalist agent-one that can successfully execute a wide variety of open-ended tasks”.

Using just a $25 device a researcher hacked into Elon Musk’s...

Enigmatic canal-filled ruins may have been above water when built

Fallout New Vegas 2: With Bethesda and Obsidian under the same...

Flush with billions, Databricks has momentum and big plans

Apple halts all device sales in Russia in response to invasion...