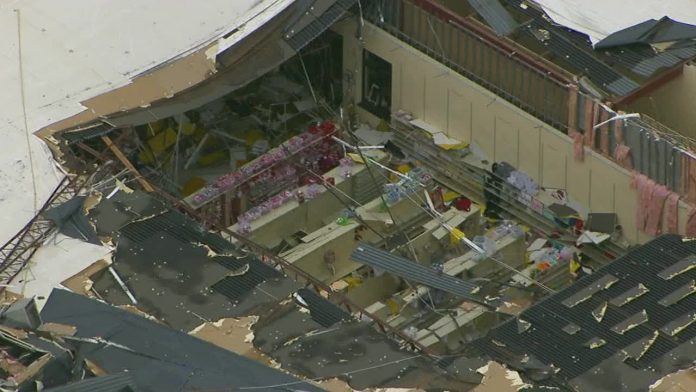 This loop of the FOX 5 Live VIPIR shows the path the line of severe storms took through Georgia on the afternoon of Jan. 12, 2023. The line of powerful storms spawned an outbreak of tornadoes with some as intense as an EF-3.

The EF-3 tornado impacted the north side of Griffin and surveyors saw another track in eastern Spalding County.

“It was really one day we won’t forget and it will be a day that we’ll study as meteorologists. We don’t usually see long-track tornadoes that come out of Alabama, making their way into north Georgia. We definitely saw one yesterday. And there were a number of other spin-up tornadoes that caused a lot of damage across the area, so it’s something we’ll continue to filter through,” said FOX 5 Storm Team Meteorologist Jonathan Stacey.

The National Weather Service reports that an EF-3 tornado hit Spalding County. It’s one of the hardest hit areas. SKYFOX Drone took a tour of part of path of destruction left behind by that devastating storm.

EF-3 tornadoes have three-second wind gusts between 136 and 165 mph. Those speeds are strong enough to move mobile homes and snap trees.

“Once again, this tells you that when we were warning you of severe weather, that every warning should be taken seriously, and even during this early time of year this stuff is nothing to take lightly,” Stacey said.

Surveyors say they determined the wind speed based on the damage along Kendall Drive.

The EF-2 impacted the east side of the county with the worst damage along Highway 16 and S. McDonough Road.

The full report on the tornadoes has not yet been released.

The tornadoes tore through some of Griffin’s busiest retail areas. The Hobby Lobby was among the hardest hit.

SKYFOX Drone flew over the building where part of the roof is now gone. Parts of the long roof are more than 200 yards away at an intersection.

Hobby Lobby workers gathered Friday and were reassured that not only are they safe, but their jobs are too. Management say the store will be closed for months to repair the storm damage, but workers will be reassigned to other nearby stores.

SKYFOX Drone flies over the Hobby Lobby in Griffin after a tornado tore through the area on Jan. 12, 2023. (FOX 5)

The neighborhoods near Griffin’s North Expressway suffered damage as well from high winds that tore off roofs, pulled down power lines, and littered storm debris across seemingly every inch, so that nothing appears untouched.

Along Pinehill Road, once one of Griffin’s prettiest neighborhoods with towering pine trees and ancient hardwoods, the path of the tornado’s destruction appears to be extremely wide.

This is where it first entered Griffin Thursday afternoon, tearing a path of destruction miles long in a line from the southwest to the northeast in a long path from Troup County, to Merewether, Pike, into Spalding County and then onto Butts County before lifting.

This story is breaking. Check back for details. If you have additional information, pictures, or video email newstipsatlanta@fox.com.

Verizon’s big advantage teeters on the edge of MEC

Storms take down trees, power lines in parts of Alabama

Warmer Arctic led to killer cold in Texas, much of US

Did the snowstorm set any records in Colorado?