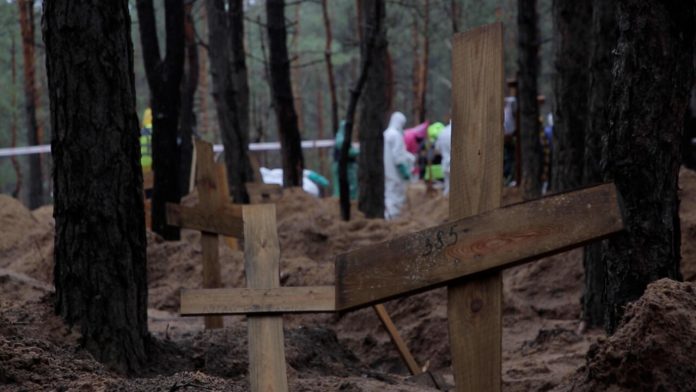 To justify the invasion of Ukraine, Russian President Vladimir Putin used the false pretexts of “denazification” and “demilitarisation” of the country. Russian state propaganda is built around the myth of a Ukraine in the hands of “Nazis”, one where the Russians come to “liberate” the “Russian speakers”. This propaganda is disseminated not only in Russia, but also in the occupied Ukrainian territories, where the population is plunged into a parallel reality. FRANCE 24’s reporter Elena Volochine went to meet locals and exposed the terrifying real-life consequences of Russian propaganda on the ongoing war in Ukraine.

Following Ukraine’s successful counter-offensive in early September, our reporter Elena Volochine, who spent nearly a decade as FRANCE 24’s correspondent in Moscow, travelled to the liberated territories of northern Ukraine. In the city of Izium, in the Kharkiv region, she witnessed the exhumation of bodies of victims of the Russian occupation, some of which bore signs of torture. On the ground, inhabitants told her of a regime of terror imposed by the Russians: a ban on speaking Ukrainian, as well as looting, arrests, systematic torture, arbitrary executions and more broadly, a parallel reality. Wherever they entered Ukraine, the Russians described themselves as “liberators” and “heroes” and made it a point of honour to try to shift the local population’s opinion to that of the “Russian world”.

“They kept repeating that they had come to liberate us. But from what?” That was the surprised reaction of many inhabitants who survived the horror. Among them was 20-year-old Yann, the grandson of a forest ranger: “I’m also an apprentice ranger, and they found my camouflage uniform. They thought that grandpa and I were targeters for the artillery.” Yann recounted the torture and humiliation they suffered when, after beating him up, the Russians burned him in the crotch. “They constantly repeated: ‘You’re a Nazi!’ I said: ‘I’m not a Nazi!’ They replied: ‘Shut up or I’ll whack you in the teeth with my rifle butt’.”

A ‘historical error’ attributable to Lenin

In the city of Poltava, Volochine met Victoria Ziborova, a history teacher who survived the occupation in the region of Berdiansk. She explained that the Russians wanted to force her and her colleagues to work with Russian textbooks and curricula, threatening them with being sent to the front if they refused. Ziborova secretly recorded an interview with the local Russian military commander, who boasted that Russia has already provided “30,000 requalification trainings” to Ukrainian teachers in Crimea. The teacher sets out how Russian propaganda rewrites history: according to Putin’s doctrine, copied word for word by the occupiers, Ukraine was “created by Russia” and is a “historical error” attributable to Lenin.

Amid these official Russian narratives that implicitly call for the destruction of Ukraine and its national identity, the Ukrainian General Prosecutor’s Office opened an investigation into possible “genocide” and “incitement to genocide”. The prosecutor in charge of the case showed FRANCE 24 the exhibits, including a book entitled “The Denazification of Ukraine”, which the Kremlin allegedly obtained back in 2018.

Our reporter also focused on the impact of these narratives on the psychology of the Russians fighting in Ukraine. She interviewed a Russian mercenary leader, who spent six months of the occupation in Izium and shared his vision of the war and his activities. Meanwhile, according to a Ukrainian psychotherapist who works for the American NGO Corus International, the reason why Russian propaganda is so effective – in a cultural context predisposed to receiving it – is because the absence of alternative information, plus the aggressiveness and omnipresence of the propaganda exhaust the mental capacities of individuals to resist it.

Newsom administration to send search and rescue aid to Kentucky after...

The Samsung Galaxy S22 Ultra's S Pen might be the most...

One new fire in the northeast region

Hurricane Fiona upgraded to Category 3 as it heads for Turks...