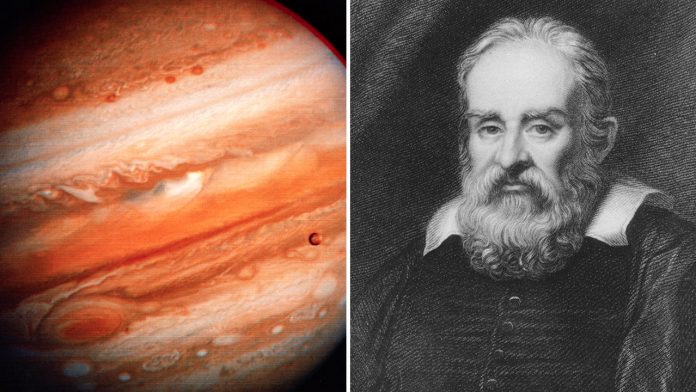 With eight planets in our solar system, more than 200 moons surround those natural satellites.

Jupiter, one of the most recognizable planets, has 80 of those moons.

On this day in history, Jan. 7, 1610, Galileo discovered the moons of Jupiter — making it the first observation of this planet.

Galileo Galilei was an Italian philosopher and astronomer born in 1564 in Pisa, Italy, according to Britannica.

After moving to Florence as a young child, Galileo attended school, then went to the University of Pisa to study medicine.

While there, he became interested in mathematics — ultimately dropping out of college without a degree to work on his own.

Still, Galileo was always teaching himself new skills and facts, according to Britannica.

Galileo was best known for producing powerful telescopes — and used one of them to discover four moons surrounding Jupiter.

A view of Jupiter from early in the Voyager 1 mission. The two Galilean moons of Io and Europa (left to right) can also be seen.
(CORBIS/Corbis via Getty Images)

On Jan. 7, 1610, Galileo discovered four moons revolving around Jupiter — a discovery that would change his life forever.

This discovery helped him prove that the Earth did indeed revolve around the sun, a fact that was not accepted at the time.

Galileo constructed a telescope that was used to see the moons of Jupiter.
(AP Newsroom)

Years later, Galileo faced charges for believing and advocating for the Copernican theory — the idea that the Earth revolves around the sun.

This theory was largely against the teachings of the Roman Catholic Church at the time.

He ultimately pled guilty and was put on house arrest indefinitely by Pope Urban VIII, according to History.com.

On this day in history, Jan. 7, 1610, Galileo discovered the moons of Jupiter.
(CORBIS/Corbis via Getty Images/AP Newsroom)

He spent the rest of his life in a villa near Florence before his death on Jan. 8, 1642.

Jupiter is fifth in line from the sun and is by far the largest planet in the solar system, according to NASA.

As for the giant red spot on the planet?

It’s a huge storm that’s bigger than Earth — having grown for hundreds of years, according to NASA.

Halo Infinite is “working” on letting you replay campaign missions

Meteorologist says Houston-area tornadoes unusual, but not believed to be part...

Facebonk, Bacefook, Hellsite: Zuck, the internet has some rebranding suggestions |...

‘There will be blood on streets,’ Google executives warn employees about...

Astronomers Have Discovered The ‘Poor Old Heart’ of The Milky Way...

Hubble Sees a Mirror Image of the Same Galaxy Thanks to...