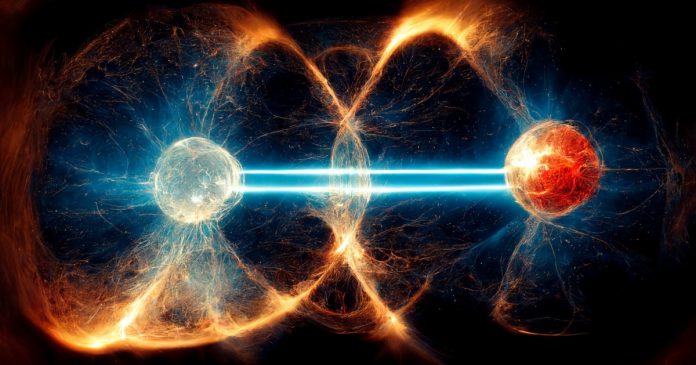 In the quantum Universe, things behave very differently than our common experience would suggest. In the macroscopic world we’re familiar with, any object we can measure appears to have intrinsic properties that are independent of whether we observe it or not. We can measure things like mass, position, motion, duration, etc., without worrying about whether that object is affected by our measurements; reality exists completely independently of the observer. But in the quantum world, that’s demonstrably not true. The act of measuring a system fundamentally changes its properties in an irrevocable way.

One of the weirdest quantum properties of all is entanglement: where multiple quanta have inherent properties that are both indeterminate, but the properties of each one aren’t independent of the other. We’ve seen this demonstrated for photons, electrons, and all sorts of identical particles before, enabling us to test and probe the fundamental and surprising nature of reality. In fact, the 2022 Nobel Prize in Physics was awarded precisely for investigations into this phenomenon.

But in a novel experiment, quantum entanglement has just been demonstrated between different particles for the first time, and already the technique has been used to see an atom’s nucleus like never before.

In principle, quantum entanglement is a simple idea to understand, and it’s built on the idea of quantum indeterminism. Imagine you pull a ball out of a hat, and there’s a 50/50 chance that the ball has one of two properties.

If you only had one ball, you might wonder: upon pulling it out and examining the ball, did it always have those properties, even before you looked at it? Or did the ball have a set of indeterminate parameters, where it was a mix of:

that was only determined at the instant you took the critical measurement?

This is one of the key insights of quantum mechanics, as shown from famed experiments such as the double-slit experiment and the Stern-Gerlach experiment. Both of them are worth an explanation.

If you take a barrier with two thin slits in it, what happens when you send a wave at it? The answer is easy: you get a wave-like pattern behind the barrier, where the parts of the wave that go through each slit interfere with one another, leading to a pattern of peaks-and-valleys on the other side.

What happens if, instead, you send a series of particles at the barrier? The answer is again easy: you get a particle-like pattern behind the barrier, where particles either go through slit #1 or slit #2, and hence you get simply two piles on the other side.

But in quantum mechanics, when you send quantum particles through the double slit, you get a wave-like pattern if you don’t measure which slit each particle goes through, but a particle-like pattern if you do make that measurement. This is true even if you send the quanta through one-at-a-time, as though they’re interfering with themselves. The act of observing — of making that critical measurement — and whether you do it or not is what determines which pattern you see. Reality, as we observe it, depends on what interactions do or do not take place prior to that critical observation.

Similarly, the Stern-Gerlach experiment arises from passing quantum particles that possess an inherent property called “spin,” which means intrinsic angular momentum, through a magnetic field. These particles will either deflect aligned with the field or anti-aligned with the field: up or down, with respect to the field’s direction.

But if you pass it through a magnetic field with a different orientation — in one of the other two spatial dimensions — it splits again: left-right or forward-backward instead of up-and-down. What’s even weirder is now, once you’ve split it left-right or forward-backward, if you go and again pass it through an up-down magnetic field, it once against splits. It’s as though the last measurement you took erased any previous measurements, and with it, any definitive determination of the quantum state that existed in that dimension.

But if you take both quanta together, you’ll find that there are correlations that exist between the combined properties of both: something you couldn’t know if you only measured one of them. You can assume that

and derive two different predictions. Part of 2022’s Nobel Prize in physics was for the demonstration that, when you actually perform these experiments and measure both quantum states, you find that the correlations are consistent only with standard quantum mechanics and not with the idea that the state of both particles exists independently of whether they’re observed or not.

It’s for this reason that quantum entanglement is often described as spooky and counterintuitive.

However, quantum entanglement experiments usually involve photons: the particles that light, electromagnetic radiation, is quantized into. The way that these entangled photons are created normally comes from passing a single photon through what’s called a down-conversion crystal, where one photon goes in and two photons come out. These photons have all the normal properties of regular photons — including spin, a wavelength defined by its energy, no electric charge, and all the standard quantum behavior that comes along with quantum electrodynamics — but will also have properties that are correlated between them: correlations that go beyond the quantum predictions of individual, isolated particles and are specific to entangled sets of particles.

For a long time, this was the only way to perform experiments with entangled quantum particles: to have two particles that were identical in nature, i.e., that were the same species of quantum particle. But in an experimental first, a new kind of quantum entanglement has just been observed: entanglement between two fundamentally different particles that even have opposite electric charges!

In particle physics, you can produce new, heavy, unstable particles so long as you meet all the quantum requirements (i.e., you aren’t violating any conservation laws) and you also have enough energy (via Einstein’s E = mc²) available for that particle to be created. From collisions involving protons and/or neutrons — i.e., quark-containing particles — the easiest particles to produce are known as mesons, which are quark-antiquark combinations. The lightest mesons, which involve only up, down, and strange quarks (and antiquarks), are:

These are the only mesons that are lighter than the proton (and neutron), and are responsible for carrying the nuclear force within an atomic nucleus. They’re all short-lived and will all decay into lighter particles, but while the neutral pion (π0) particle always decays into two photons, the neutral rho (ρ0) particle always decays into both a positively charged (π+) and a negatively charged (π–) pion.

It might not surprise you to learn that some of the properties of the photons that arise from neutral pion decays can be entangled: photons are identical particles and these two arose from the decay of a single quantum particle. But the shocking discovery that was just made was that the two charged pions that arise from a neutral rho decay are also entangled, marking the first discovery of two distinct, non-identical particles to display entanglement properties. Particles like pions and rhos can emerge not only from the collisions of two protons with one another, but also energetic-enough near-misses, simply from the interactions of the gluon fields of these two protons.

Travel the Universe with astrophysicist Ethan Siegel. Subscribers will get the newsletter every Saturday. All aboard!

The way the entanglement was identified was brilliant: when two rho particles are created in the atomic nuclei of two adjacent protons, they each decay into those two charged pions almost immediately. Because they’re so close together in space, the two positively charged (π+) pions and the two negatively charged (π–) pions each interfere with one another, making their own superposition and their own wavefunction.

The interference patterns observed between the positively and negatively charged pions are the key evidence that reveal the inescapable but bizarre conclusion: the oppositely charged pions produced in each rho particle’s decay — the π+ and the π– —must be entangled with one another.

These observations were only possible because the rho particles that are produced are so astoundingly short-lived: with a mean lifetime of only 4 yoctoseconds, or 4 septillionths of a second. Even at the speed of light, these particles would decay very quickly compared to the distances between them, enabling the overlap of the pion wavefunctions to be substantial.

Best of all, this new form of entanglement resulted in an immediate application: to measure the radius and structure of the heavy atomic nuclei that were almost (but not quite) collided with one another in these experiments. The spin-interference pattern that arose came from the overlap of these two wavefunctions, allowing the researchers to determine what the radius was to describe the interactions of the gluon fields from each atomic nucleus, for both gold (Au-197) and uranium (U-238). The results, of 6.53 ± 0.06 fm for gold and 7.29 ± 0.08 fm for uranium, are remarkably both larger than the radius you’d expect from measurements each nucleus using electric charge properties.

For the first time, an experiment was able to demonstrate that it isn’t just identical quantum particles that can become entangled, but particles with opposite electric charges, too. (The π+ and the π–, for what it’s worth, are one another’s antiparticle.) The technique of passing two heavy nuclei very close to one another at nearly the speed of light allows for photons, arising from the electromagnetic field of each nucleus, to interact with the other nucleus, occasionally forming a rho particle that decays into two pions. When both nuclei do this at once, the entanglement can be seen, and the radius of the atomic nucleus can be measured.

It’s also remarkable that measuring the size of the nucleus through this method, which uses the strong force rather than the electromagnetic force, gives a different, larger result than one would get by using the nuclear charge radius. As lead author on the study, James Brandenburg, put it, “Now we can take a picture where we can really distinguish the density of gluons at a given angle and radius. The images are so precise that we can even start to see the difference between where the protons are and where the neutrons are laid out inside these big nuclei.” We now have a promising method to probe the internal structure of these complex, heavy nuclei, with more applications, no doubt, soon to come.

Foundation: The real-life science of predicting the future

A billionaire famous for name-calling is moving his corporate HQ over...

Mario Kart 9 in ‘Active Development,’ Will Have New Gameplay Twist