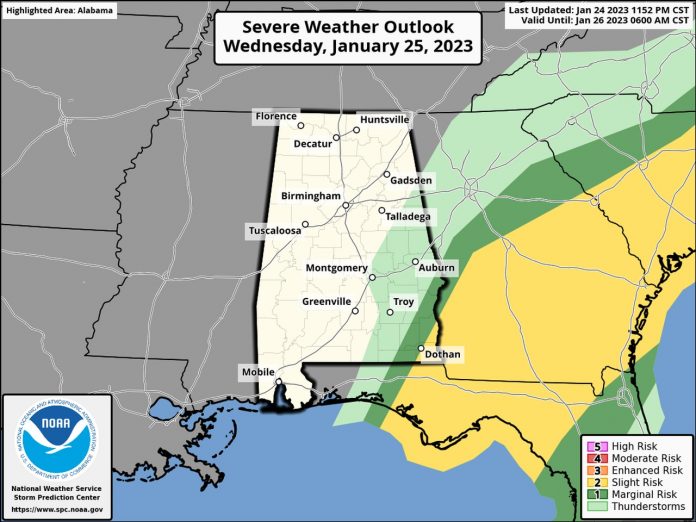 Rain and storms were making their way out of Alabama early Wednesday morning, and the threat for severe weather was almost over as of 6:30 a.m.

A tornado watch remains in effect for Geneva and Houston counties in southeast Alabama, and strong storms were affecting that corner of the state Wednesday morning.

The tornado watch is expected to expire at 10 a.m. CST.

It was a busy night for the National Weather Service offices that cover the southern half of the state.

Forecasters issued multiple tornado and severe thunderstorm warnings for south Alabama, many of them in the early morning hours. The severe storms were confined to south Alabama while a large shield of rain moved across parts of north and north-central Alabama overnight.

There could be more reports with the morning light.

A tornado watch has been dropped for southwest Alabama, but another one will continue for a little longer for Geneva and Houston counties in southeast Alabama. The warning is set to expire at 10 a.m. CST but could be dropped as soon as storms clear the area.

Here is a look at storm reports so far:

The threat for severe weather will end after the storms clear the area, but some rain could linger on and off through Thursday. Cooler and drier weather is expected into the weekend, but more rain will be possible starting on Saturday.

So far no more severe weather is on the horizon — at least for the next few days.