Following the iconic first view of a fully integrated Starship stack during fit checks on the Orbital Launch Site (OLS) mount, both Ship 20 and Booster 4 are being prepared for testing ahead of the milestone orbital launch attempt. Ship 20 has returned to the launch site, taking up suborbital Pad B ahead of proof testing objectives, while Booster 4 is undergoing final closeout work inside the High Bay.

The pre-launch campaign is ongoing while SpaceX makes preemptive moves on the future, with modifications to future Starships designs and the preparations to increase production cadence with a second, much larger, High Bay.

Booster 4 (B4), the first Super Heavy set to fly, is currently residing inside the High Bay for work that Elon Musk described as “some small plumbing and wiring” processing. The booster returned to the production site on August 11 after it was temporarily integrated with Ship 20 at the OLS.

The stunning sight of the full stack provided a major milestone for the vehicle and the launch site. It also provided a statement of readiness amid a relentless disinformation campaign by Blue Origin over the Human Landing System (HLS) award from NASA.

Part of Blue Origin’s claim included a reference to Starship not yet having a launch site, published around the time the integrated stack was placed on the OLS.

SpaceX photo of Ship 20 being mated on Booster 4

Booster 3 (B3) conducted a three-engine Static Fire test – the first time a Super Heavy had fired up a set of Raptors. While there was the potential B3 would go on to conduct a nine-engine test, the plans were altered based on the readiness of Booster 4’s campaign, as intimated by Musk.

Booster 3 has since begun the process of being scrapped, with work being conducted at Suborbital Pad A.

However, that potential test roadmap may point to the expected milestones for Booster 4 once it returns to the launch site.

Pending the completion of freeing Pad A from the remains of B3, B4 could take its place on the mount, allowing for proof testing, cryo testing, and a series of Static Fire tests, including up to nine engines firing at once.

Conducting this initial test campaign on Pad A would cause minimal disruption to the ongoing work at the Orbital Launch Site. However, the OLS mount’s own readiness will determine the best approach once B4 is ready to depart the High Bay and roll down Highway 4 again, possibly allowing the Super Heavy to head directly to the OLM (Orbital Launch Mount).

Ship 20 is already back at the suborbital launch site and is now preparing for its own pre-launch test series.

This will include an initial test involving the loading of the vehicle with nitrogen, usually in a two-step fashion. First, the vehicle will initially be filled with gaseous nitrogen, called the ambient test, before being loaded with super-cold liquid nitrogen (LN2) for the cryogenic test.

Notably, with the Thrust Rams removed from Pad B, Ship 20 will only undergo pressure testing, minus a ram test that simulates stresses from the engines at ignition.

Road closures for this level of testing have been posted for the upcoming week, starting on August 24.

Should Ship 20 pass those test milestones, the next standard requirement would be to Static Fire the vehicle, as seen with the previous prototype Starships.

However, this is the first Starship that will sport the full quota of engines, namely three sea-level Raptors and three Raptor Vacuum (RVac) engines. The latter can be safely fired at sea level, as observed on the test stands at SpaceX’s McGregor facility. However, the scenario for firing up the RVacs installed on the aft of a Starship will be a first, especially if they aren’t fired individually.

Also, it is not yet known if such a test will be conducted before or after Ship 20’s Thermal Protection System (TPS) has been fully installed.

Currently, Ship 20’s TPS is only partially installed, with many tiles removed and many more marked by colored indicators – likely denoting the status of the tile, itself a throwback to the Shuttle era. At some point, any issues indicated by these markers will need to be resolved along with the replacement of the removed tiles. 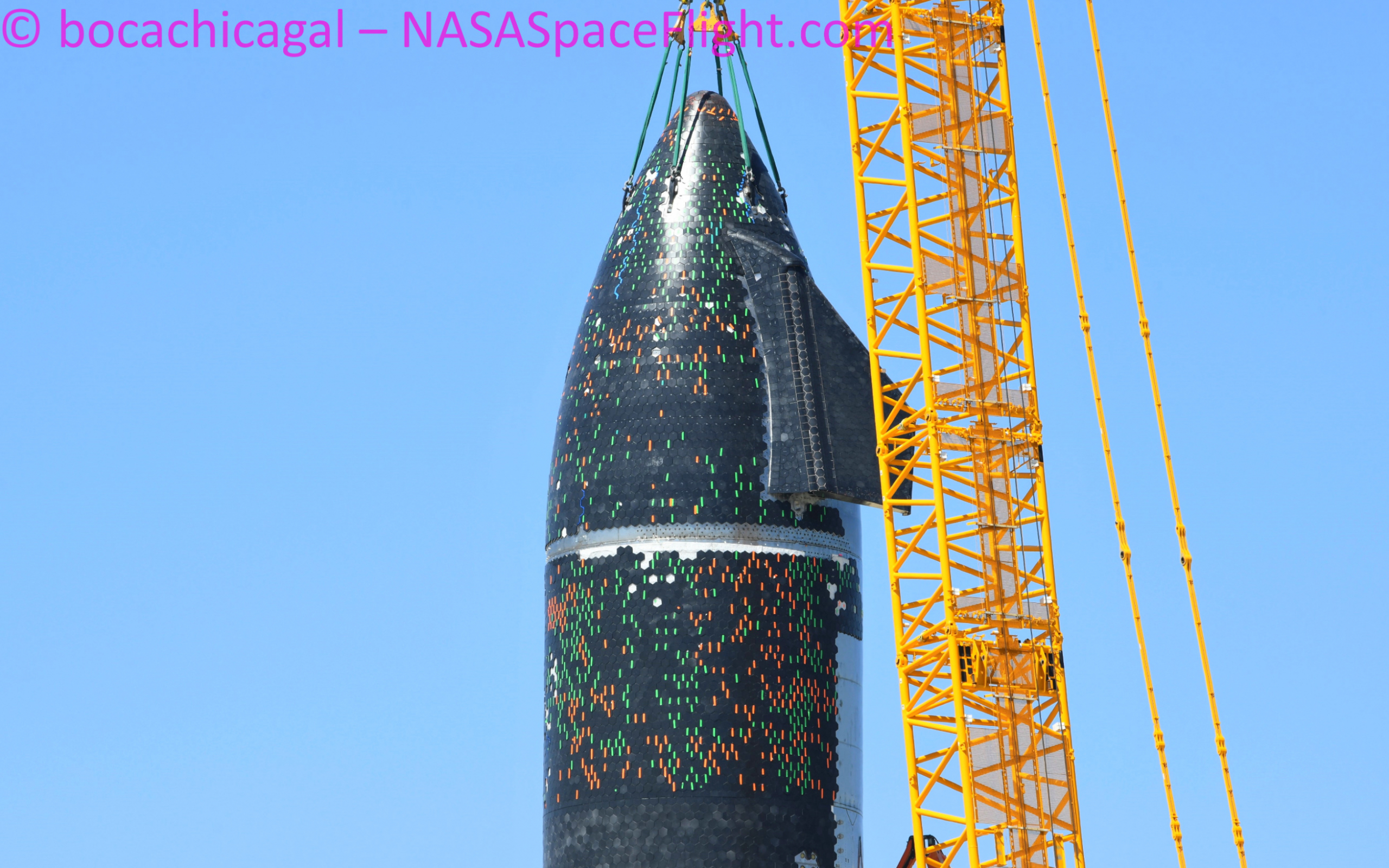 A large amount of performance data will be gained during the proof testing and Static Fire tests for Ship 20’s TPS, not least via the vibrations induced during the engine firing.

Although the completion of all of this testing could take a long time, in Elon Musk’s mind, the path to returning B4 and S20 to being an integrated stack could be during this month.

A week ago, Musk tweeted that the “first orbital stack of Starship should be ready for flight in a few weeks, pending only regulatory approval.”

Ultimately, once the vehicle is in its launch configuration, there will be a lengthy process of passing the aforementioned regulatory approval, with an environmental public comment period triggered ahead of launch. This has to be completed before the launch license can be granted by the Federal Aviation Administration (FAA).

As such, launching this year – as recently cited by SpaceX President and COO Gwynne Shotwell at an industry meeting this past week – is the main hope.

The Orbital Launch Site continues to be a hive of activity, with its functionality a key element of proceeding toward the orbital launch attempt.

An operational GSE (Ground Support Equipment) Tank Farm is a must, with work still to be concluded before loading propellant into an integrated Starship and Super Heavy stack. 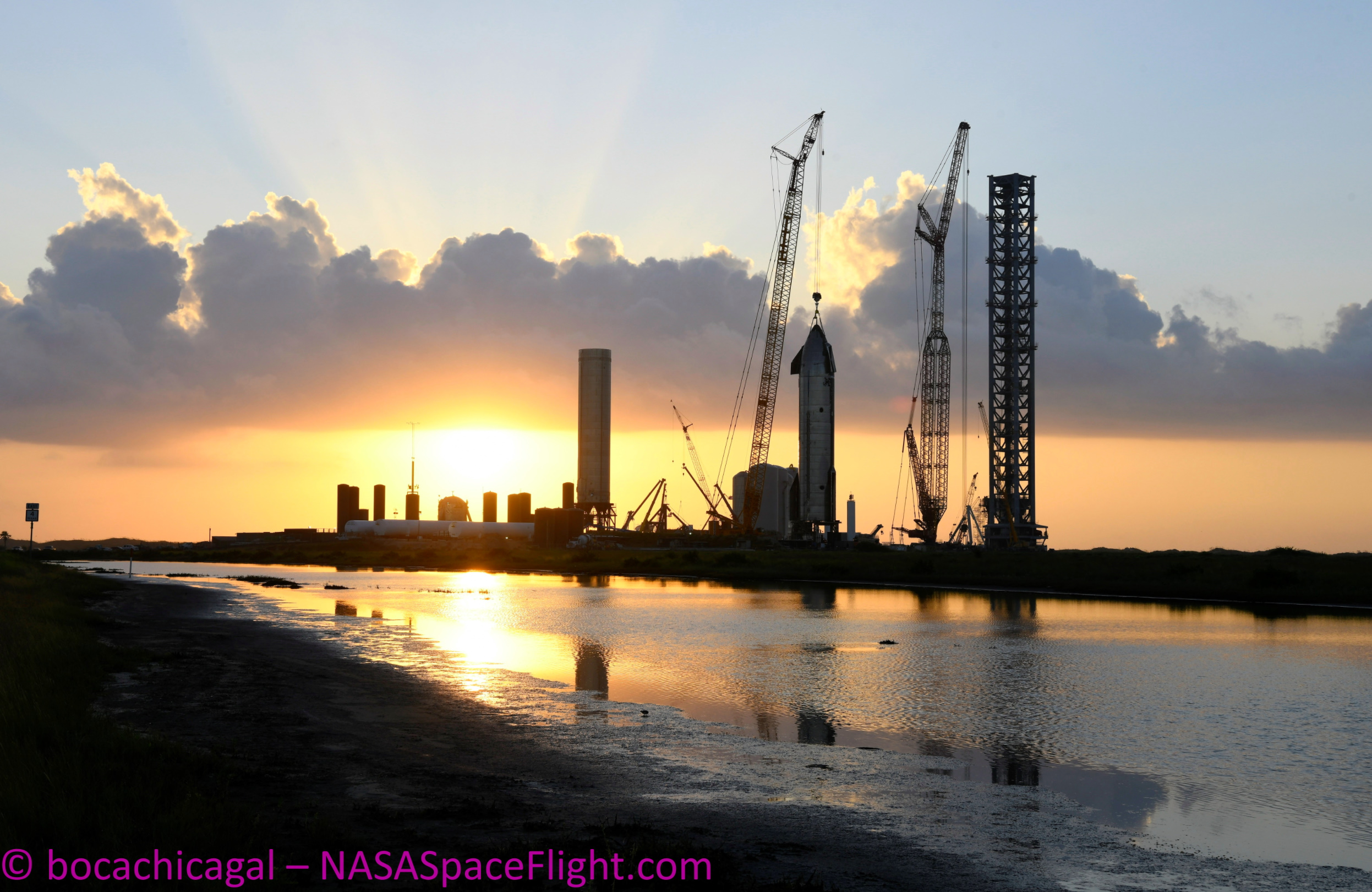 The Starbase Launch Sites – via Mary (@bocachicagal) for NSF

Propellant lines are being laid in a trench from the Tank Farm to the Launch Table and Integration Tower. A berm will then be constructed around the tank farm to provide blast protection.

The new tank farm saw some activity this past week, with some light venting observed coming from the GSE tanks.

However, yet to arrive at the Tank Farm are two Methane GSE tanks and four cryo shells, along with completing modifications on GSE 1 and 2 ahead of being sleeved with cryo shells – as also required on GSE 6, 7, and 8.

Work will also be required to complete connections to the Launch Table and the huge Integration Tower that now dominates the Boca Chica skyline – as well as installing the Quick Disconnect (QD) arm required to fuel a Starship when atop the Super Heavy booster. 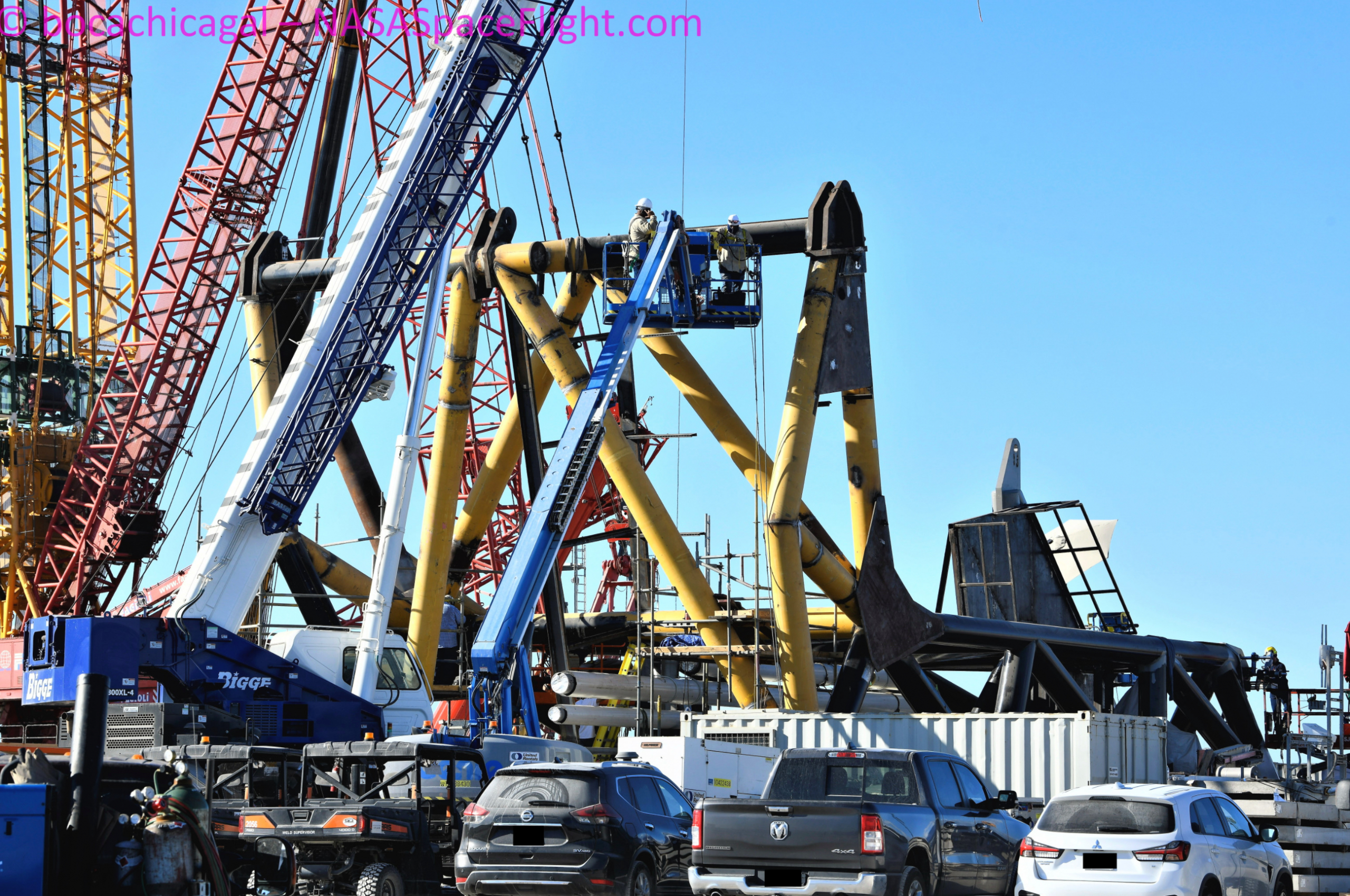 The QD Arm continues to be fabricated on-site, along with the fascinating arms that will catch boosters and Starships when they return to the launch site. However, “Mechazilla,” as Musk calls it, won’t be required for Booster 4 and Ship 20’s flight, given both will be splashing down in the ocean at the conclusion of their test mission.

Once operational, Mechazilla will also stack the vehicle, removing the need to use a mobile crane at the launch site.

Work has continued day and night on the launch mount that will host the integrated stack, with two nozzles for the sound suppression system, which gushes water under the rocket’s exhaust to dampen the acoustic energy of 29 Raptors, already spotted.

As per usual, SpaceX’s build cadence has seen future Starships and boosters already being prepared at the Production Site.

Ship 21’s aft dome was recently sleeved, while sections for Booster 5, and even Booster 6, have been spotted around the facility.

The current evolution of Starship will only involve the next few vehicles, with modifications already in the pipeline, possibly in time for Ship 24.

A “smooth nosecone” was spotted again in the nosecone manufacture tent. This new nosecone has improved build quality and is made from far fewer individual sections. Per the nosecone currently being worked on, it is unknown if this is just a pathfinder nosecone or if it will be used in future Starships.

What is now known is the design of the forward flaps will change. They will be positioned further front/up of the ship and at 120 degrees apart from each other (previously 180 degrees), the closed-angle opposite the tiled side. This modification aims to provide more control over the ship while downsizing the fixed part of the forward flap structure.

Despite the already-impressive production cadence, Musk had already confirmed that a new High Bay was soon to be built, slightly taller and wider, allowing for triple the current High Bay capacity at the Production Site.

Groundbreaking has already started to the north of the current High Bay, although its construction timeline is currently unknown.

Grab some cool gear along with the ability to support our content: https://shop.nasaspaceflight.com/

Moto G30 is the latest device to receive an update to...

How to Delete Apps on iPhone Fast and Easy

US experts request to permanently move ISS to lower orbit –...

Megalodon – The Largest Shark That Ever Lived – Could Eat...