The latest winter storm to hit the US – nicknamed ‘the Saskatchewan Screamer’ has caused chaos across much of the country, bringing tornadoes, heavy snowfall, power outages for 220,000, and cancelations of 2,700 flights.

After unleashing its fury across the southeast Sunday, the extreme weather is likely to begin moving northeast before battering states along the Atlantic on Monday, Accuweather forecasters said.

‘The heaviest snowfall will accumulate across interior parts of the Northeast, unloading accumulations that could bring some communities to a standstill,’ the weather network reported.

By the time the storm is through, 100 million Americans will likely have felt its effect, Accuweather said.

Snow is expected to be heaviest Monday from western Maryland and Pennsylvania through Maine, with some regions likely to see 12 inches of snowfall, the Weather Channel said.

High wind warnings are in effect from Suffolk counties in New York through Maine; gusts of up to 65 miles per hour are expected in Long Island, and from Cape Cod to Cape Ann, said the National Weather Service.

The storm has already left more than 220,000 people without power.

In North Carolina – hit hardest by Sunday’s winter furor – more than 82,000 people were without power as temperatures plunged to 25 F.

More than 74,000 others were powerless in South Carolina where the thermostat dipped to 25 F, while a blackout affected about 20,000 people in Florida, according a site that tracks electricity outages. More than 45,000 outrages were reported in Georgia, where Atlanta recorded a low of 36 F.

The storm also caused chaos on roadways throughout the southeast, including Tennessee, where treacherous conditions prompted warnings from the National Weather Service.

Air traffic was also brought to a standstill, with 95 percent of flights cancelled Sunday at Charlotte Douglas International airport. More than 600 planes leaving the airport were grounded, and about 600 flights destined for the city were nixed, according to FlightAware.

Another 171 flights were cancelled at the Raleigh-Durham International Airport.

A portion of the state’s I-40 eastbound was closed Sunday after a transport overturned during wet and slick conditions, a Tennessee transportation department spokesperson said.

Tornadoes caused by the ongoing storm hit southwest Florida early Sunday, with one obliterating the Tropicana RV Resort, where trailers were torn to bits,

The twister also hit nearby Cottage Point Trailer Park, where an 81-year-old man recounted his home being torn from the ground. It landed atop a neighbor’s roof, the Naples Daily News reported.

‘The tornado took me off my feet blew me toward the east wall and buried me under the sink, refrigerator, kitchen chairs and everything else,’ he told the outlet. 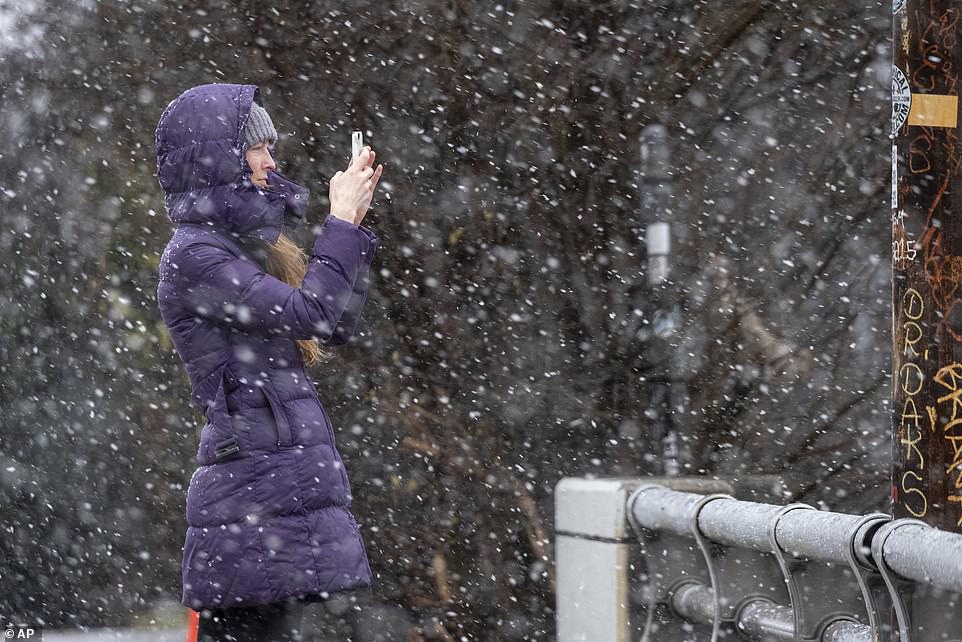 A woman stops for a photo during Sunday’s snowfall in Atlanta, Georgia. The National Weather Service reported gusts of wind reaching 50 miles per hour in the northeastern part of the state coupled with a mix of freezing rain and snow 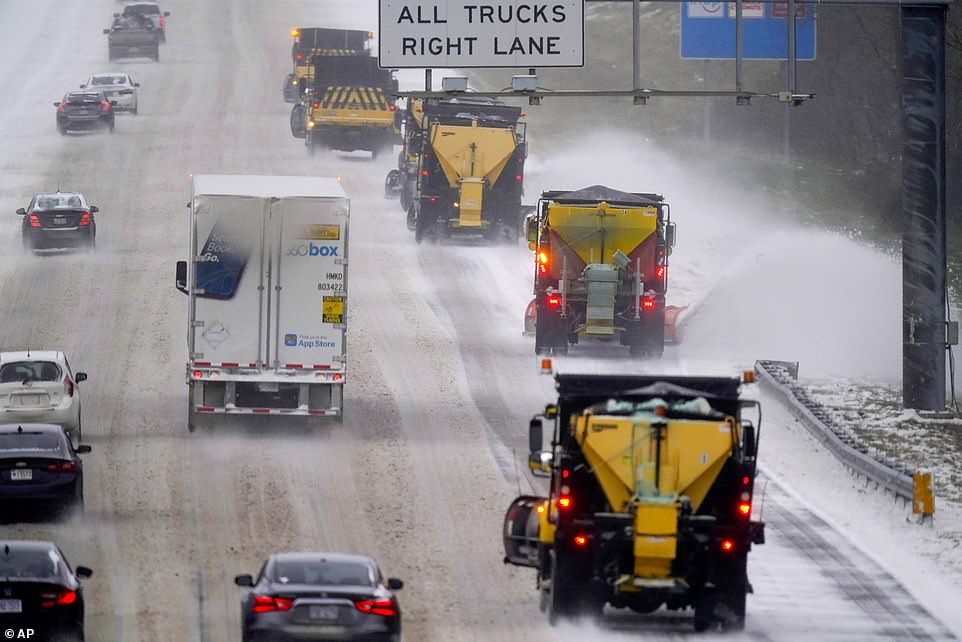 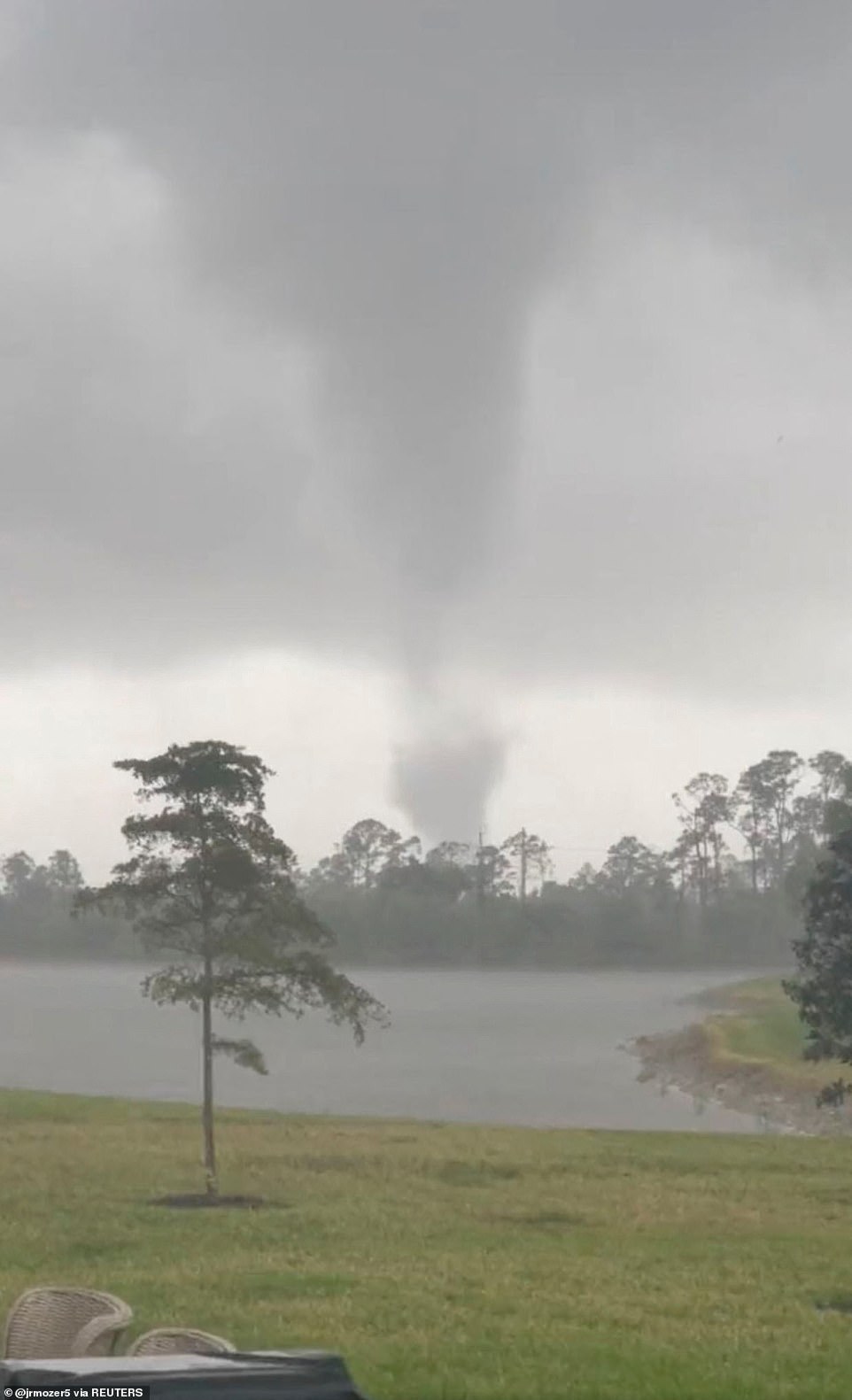 A tornado bore down on parts of Florida, including Naples and Fort Myers, Sunday morning 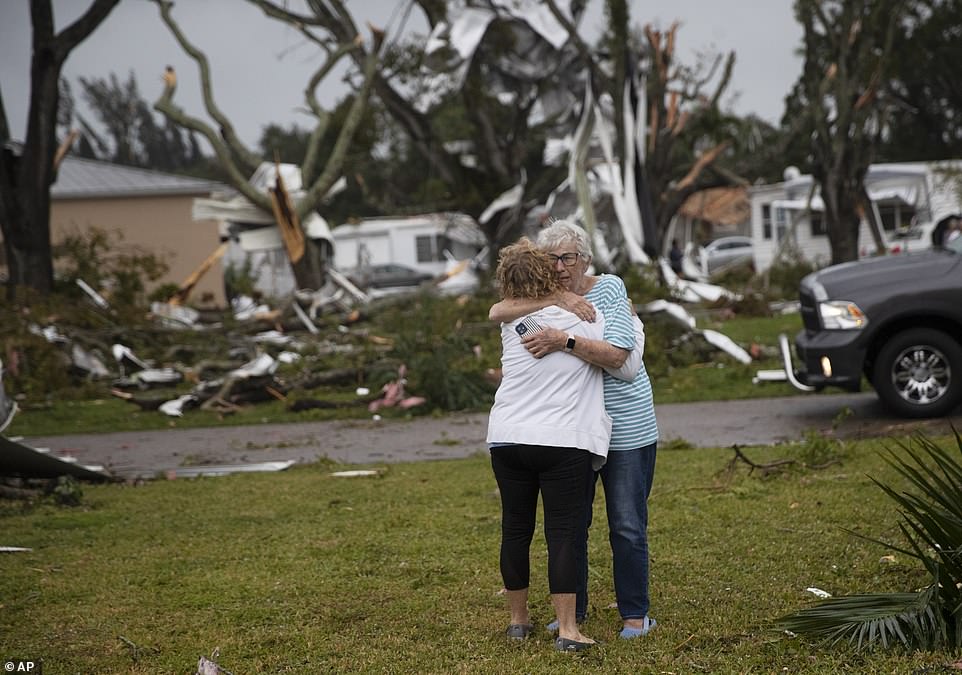 It leveled a number of homes, including those at the Century 21 Mobile Home Park in Fort Myers, Florida, where elderly women were seen embracing Sunday 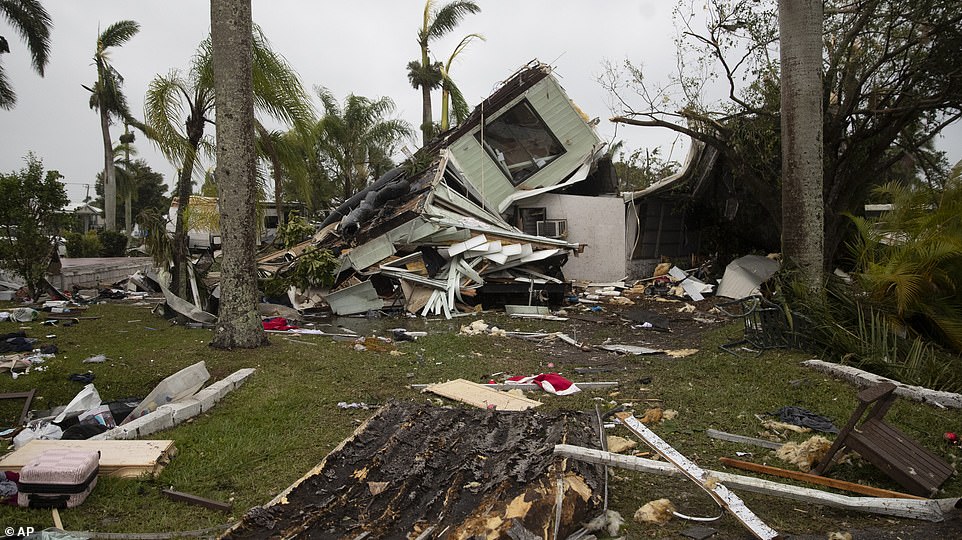 Miraculously, no deaths were reported after the twister flattened mobile home parks 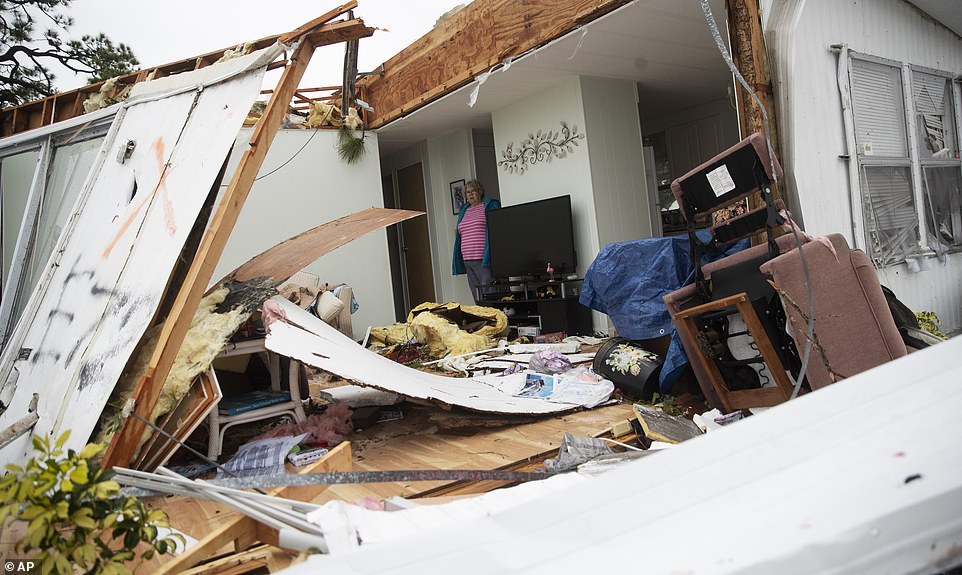 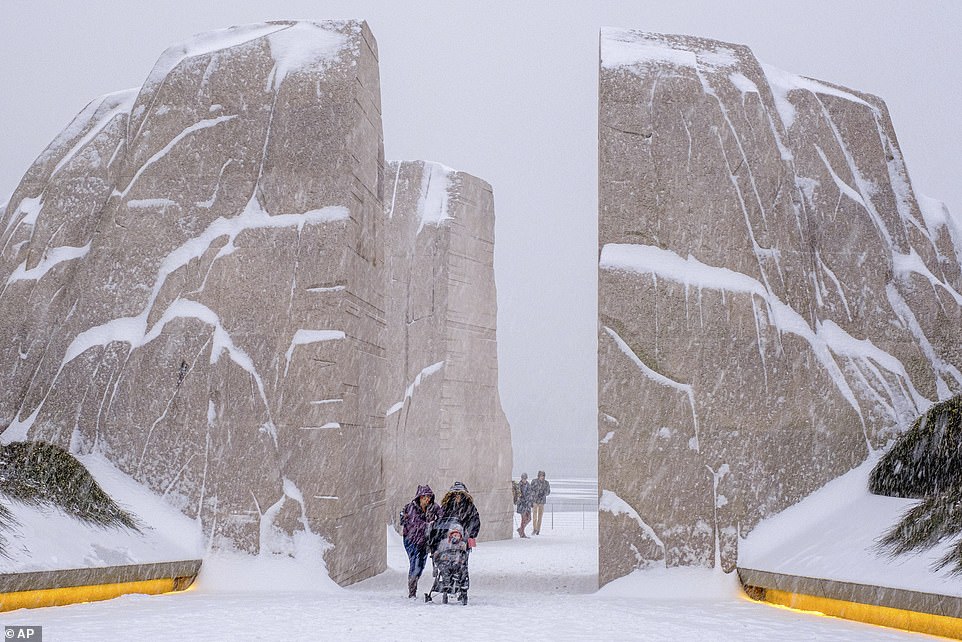 Visitors walk through the Martin Luther King Jr. memorial as the storm blows through Washington on January 16 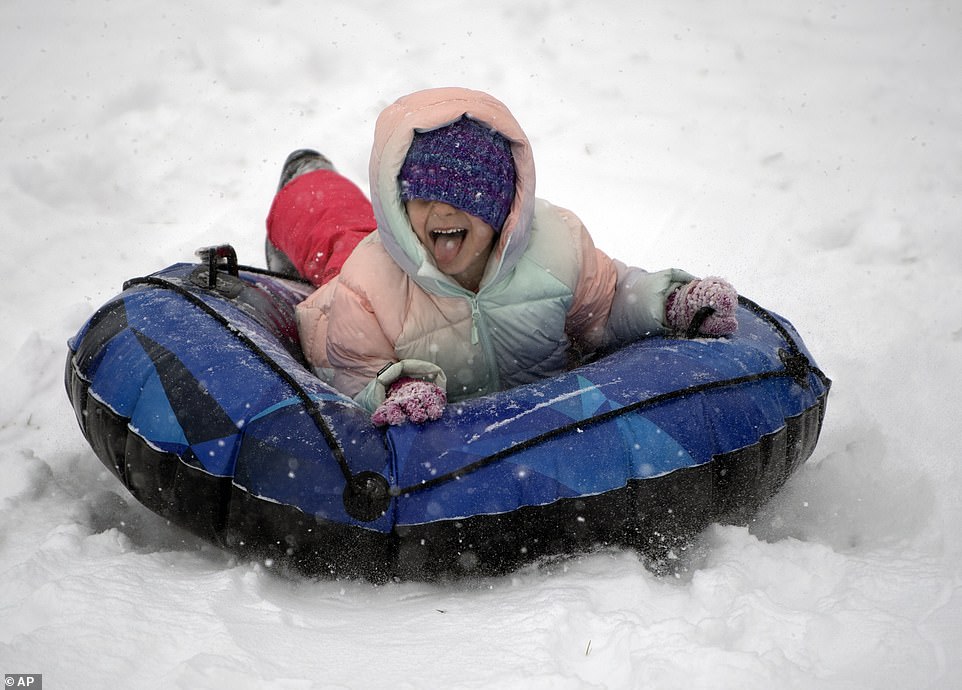 Jonah Hanks, five, tubes down a slope in Southwest Roanoke City in Virginia on January 16

North Carolina Governor Roy Cooper said during a Sunday press briefing that between eight to 12 inches of snow landed in some counties, with ice wreaking havoc on central region roadways.

Forecasters initially expected 18 inches of the white stuff to hit western parts of the state.

Officials said 25 counties have declared a state emergency, and that shelters and warming centers were opened to house those without power.

Transportation Secretary Eric Boyette urged North Carolinians to avoid unnecessary travel, saying ‘roads are treacherous across much of our state’ with many thoroughfares covered in snow and ice. 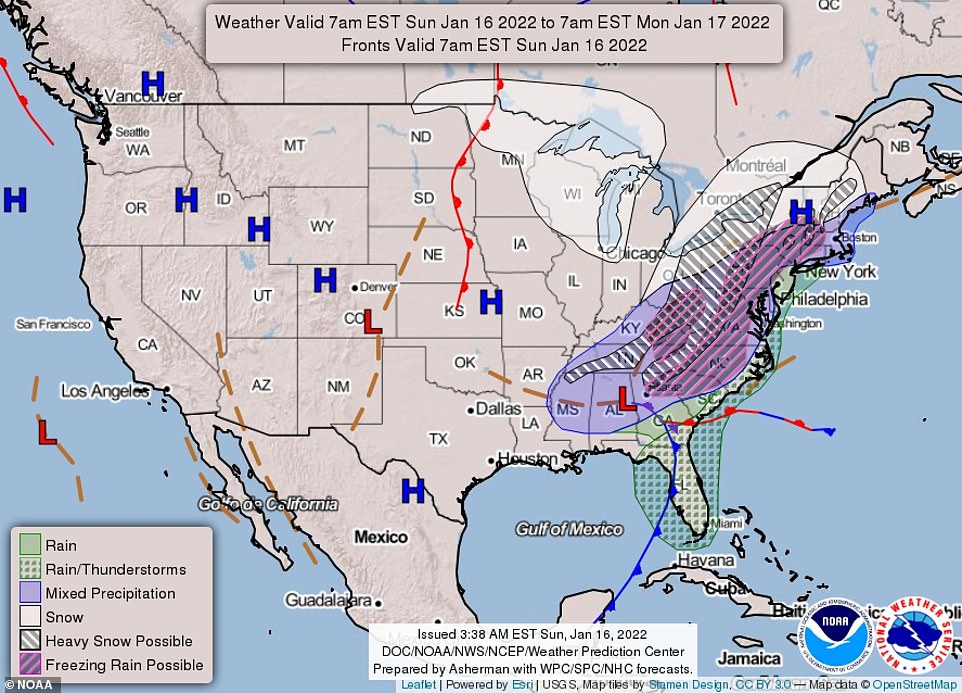 More than 200 crashes were reported throughout affected parts of the state, officials said.

In Georgia, the National Weather Service reported gusts of wind reaching 50 miles per hour in the northeastern part of the state coupled with a mix of freezing rain and snow.

The state’s transportation spokeswoman Natalie Dole said conditions were expected to worsen throughout the day and urged people to stay home.

‘We’re going to have some pretty dangerous conditions on our roads,’ she said. ‘Inclement weather conditions will include downed trees and downed power lines.’ 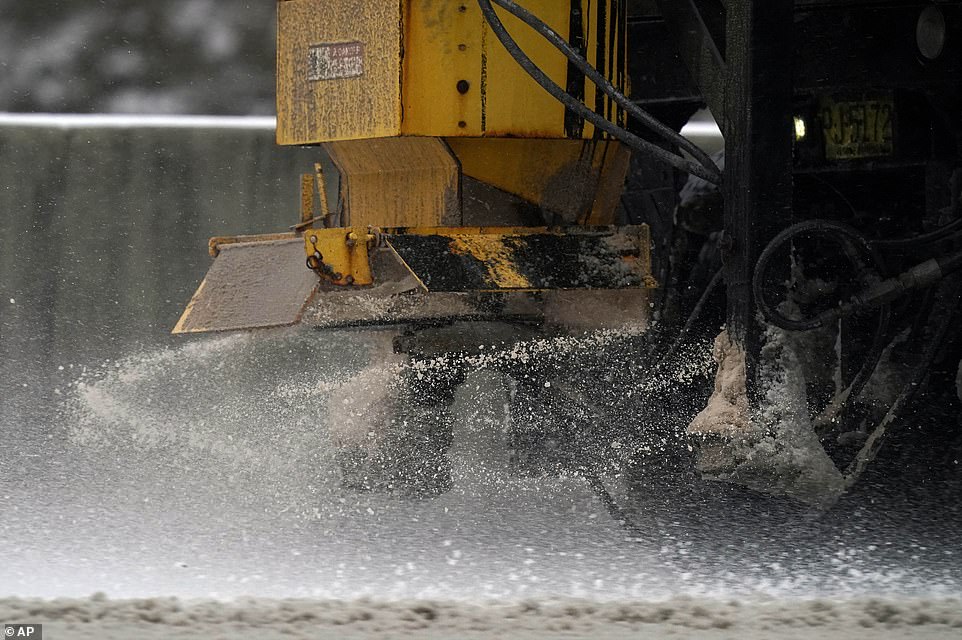 A salt truck is pictured spreading brine on a road as the storm moves through Durham, North Carolina on January 16 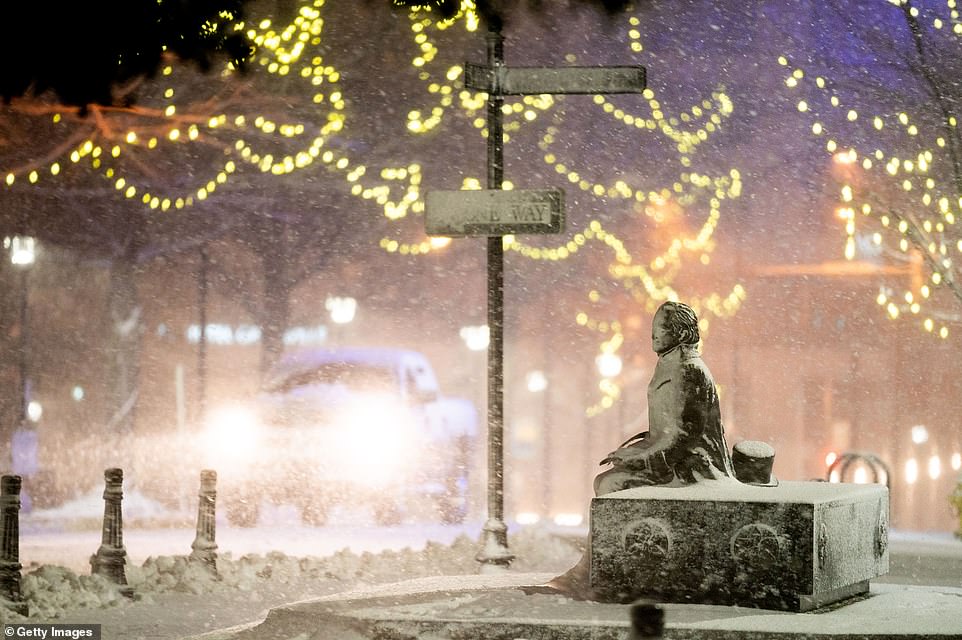 In Greenville, South Carolina, snow falls as a motorist travels through the city’s main street January 15 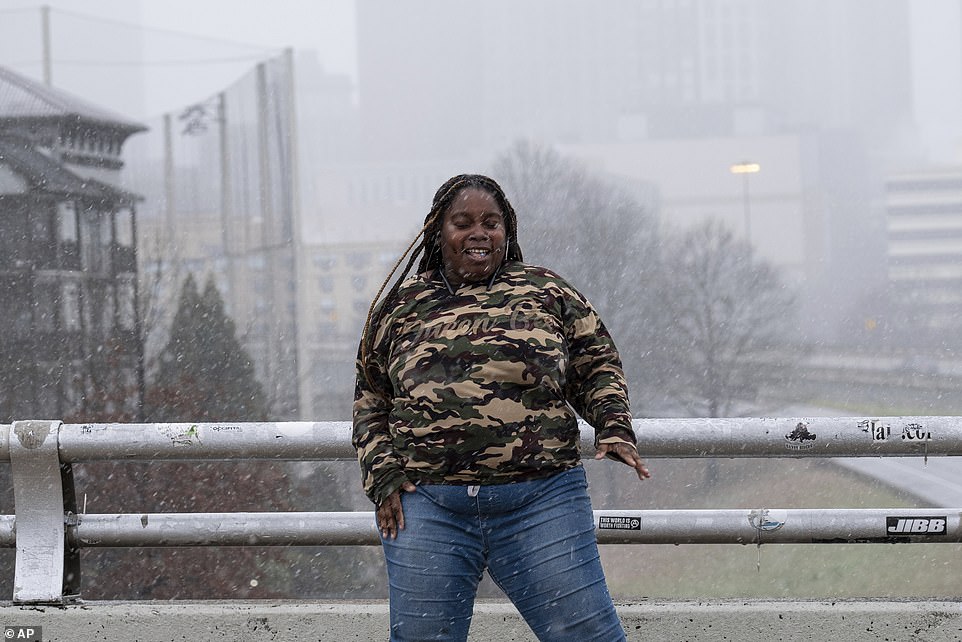 A state of emergency has also been declared in Virginia,  where a scheduled open house for newly-inaugurated Governor Glenn Youngkin was postponed due to inclement weather.

Earlier this month in Virginia a blizzard left thousands of motorists trapped on clogged highways for more than 27 hours. 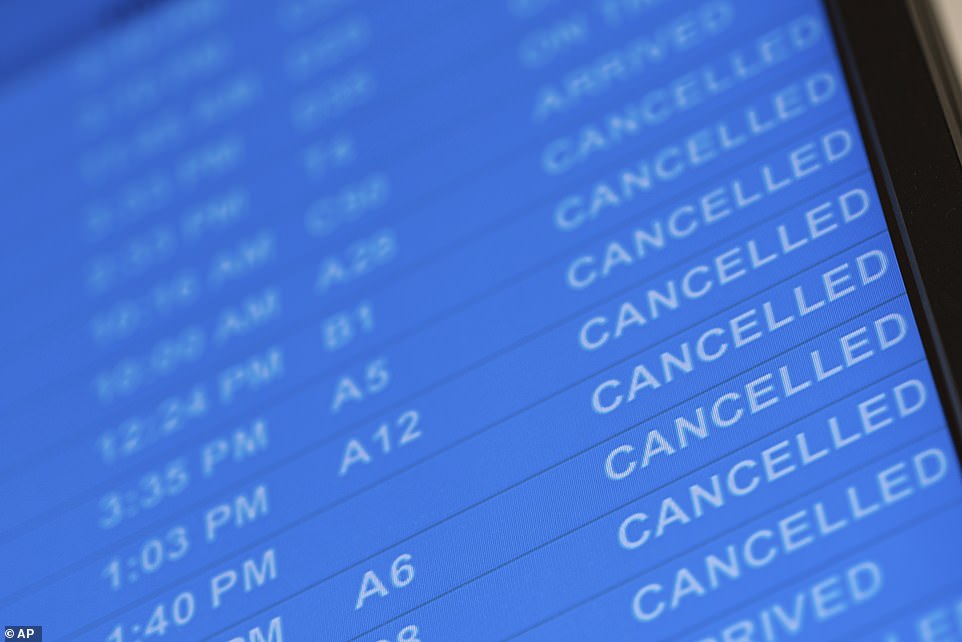 The storm prompted the cancellation of more than 1,200 flights at the Charlotte, North Carolina airport, where 95 percent of outgoing trips were cancelled Sunday 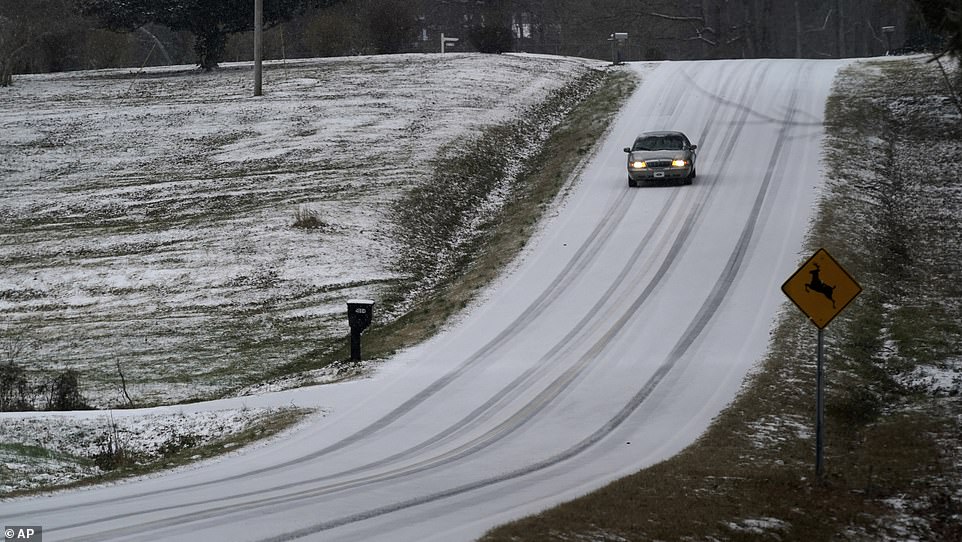 A driver navigates an icy road in Orange County, near Hillsborough, North Carolina on January 16 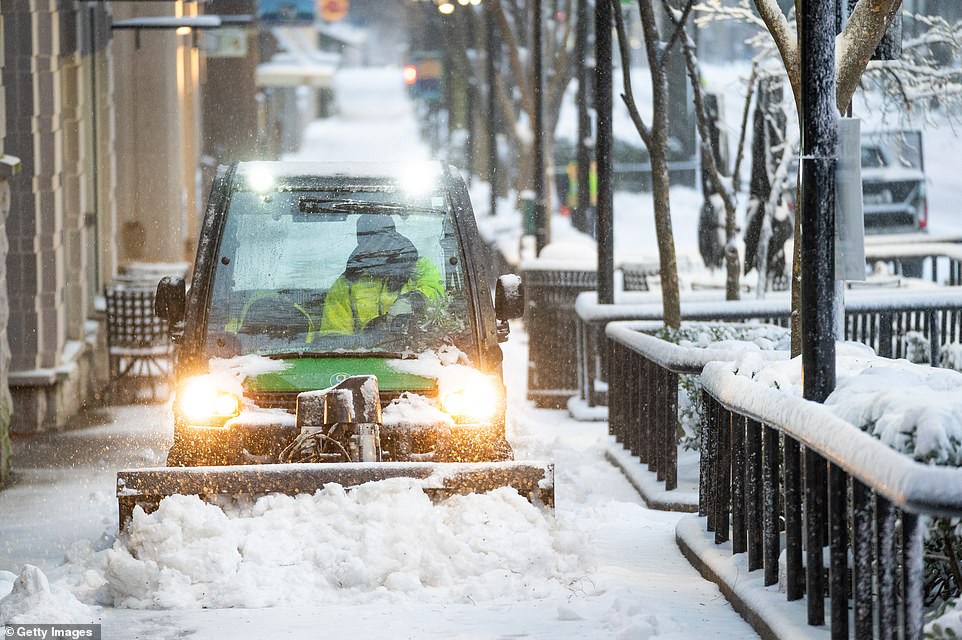 A pow clears the sidewalk in Greenville, South Carolina. Parts of the state recorded a foot of snow Sunday

The current storm, which is barreling in from Canada, is expected to spread heavy snow throughout the upper Ohio Valley, the Great Lakes, and parts of New England, the NWS said.

‘Arctic air already in place across the central and eastern U.S. will work in concert with this dynamic system to deliver a wide swath of more than a foot of heavy snow northward across the upper Ohio Valley through the lower Great Lakes, as the storm center is forecast to track up the interior section of the East Coast through Monday,’ it said Sunday afternoon.

‘Closer to the track of the storm center, snow that initially falls is expected to change over to a period of sleet and/or freezing rain before changing over to plain rain across interior Mid-Atlantic and up through the lower elevations of New England.’

It is expected to reach southeastern Canada by Monday night, and will likely die down by the time it reaches the northeast Monday night, the weather service said.

After Pak and Beeple, What’s Next for NFT Collectors? Art Made...