German start-up Sono Motors has unveiled its production-ready solar-powered electric car – and claims to already have over 19,000 orders for the panel-covered hatchback.

The Sion was revealed last week at a special ‘Celebrate the Sun’ community event hosted by the brand in Munich.

Some 456 solar ‘half-cells’ cover almost the entirety of the car’s bodywork to generate enough renewable energy to add 70 miles per week to the Sion’s estimated 190-mile battery range.

It said the passenger vehicle should go on sale in Germany next year priced from around €25,000, the equivalent of around £21,000 – that means it would undercut most conventional electric cars currently on the market.

Would you buy a solar-electric vehicle? This is the Sono Motors Sion, which could become the first mass production passenger car to feature solar panels all over its bodywork

Sono Motors says the solar-panel-covered Sion is set to become an ‘affordable and reliable SEV [Solar Electric Vehicle] for the masses’.

The car has been under development since 2017, though the company says the final production design shown here has ‘major enhancements’ not yet seen on any of the earlier concepts.

This includes a more streamlined look from having fewer lines and clearer surfaces as well as re-designed headlights and rear light cluster and revised door handles.

The boot lid also gets a camera mounted on it – presumably to display a review view while reversing – and there’s a new charging ‘lid’ up front, which is a flip-up panel at the bottom of the bonnet.

Every exterior panel of the car has solar cells built into them apart from the front and rear bumpers, with the roof totally covered in cells to capture the most rays. 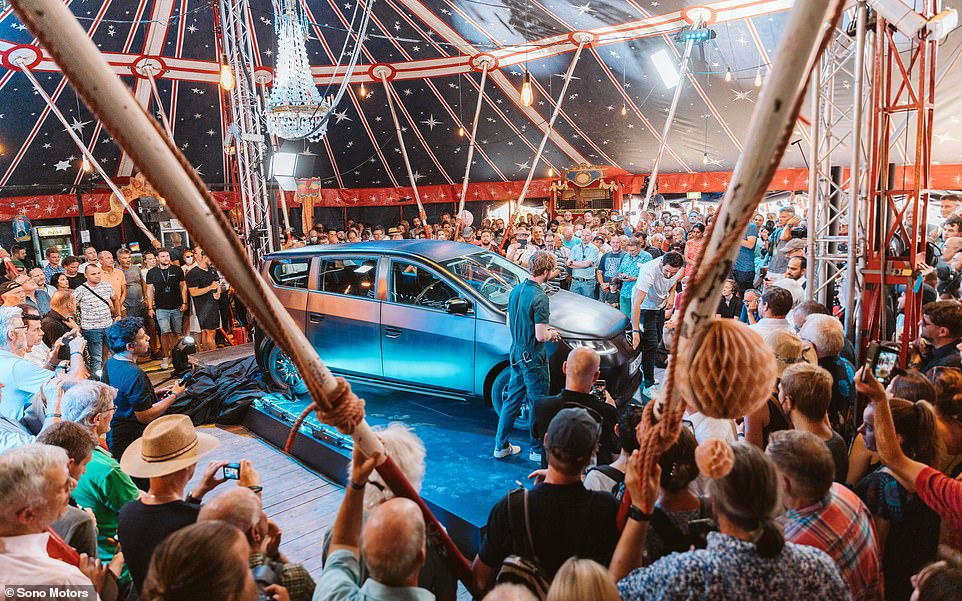 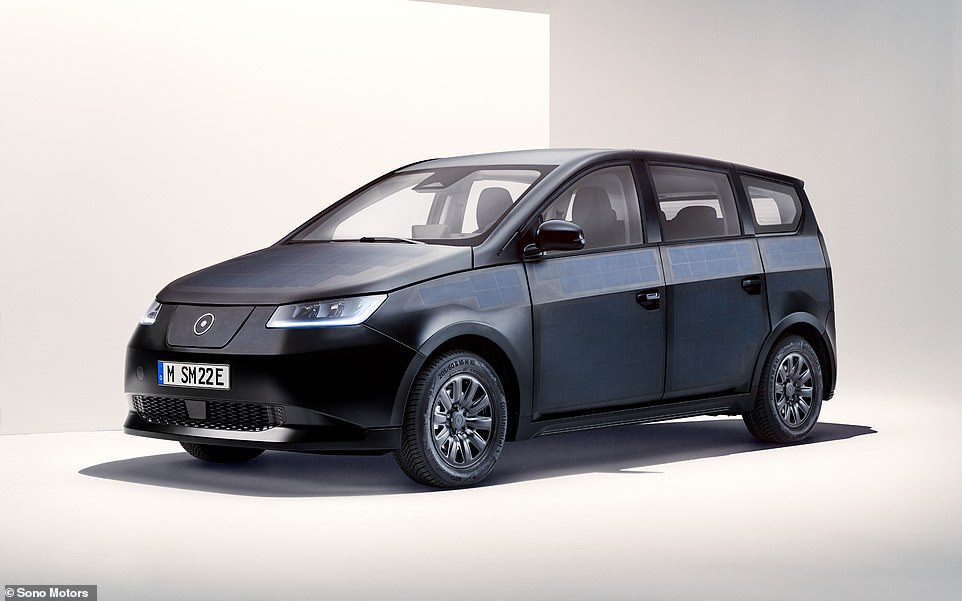 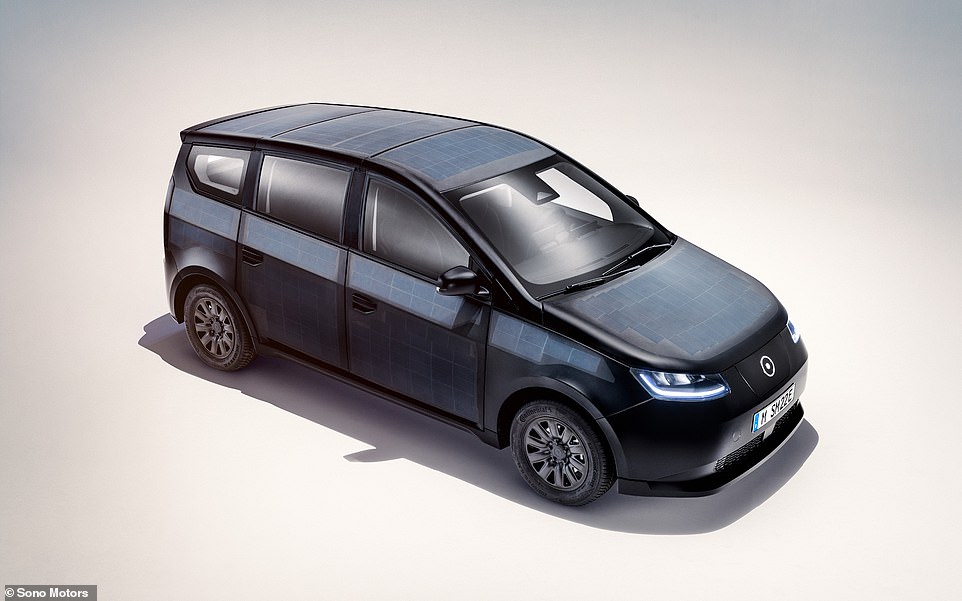 The start-up car maker has also made revisions to the cabin to make it feel more spacious and bolster storage options.

The front seats and rear bench featuring in the production-ready version shown last week are new, as is the steering wheel design.

The uncluttered dashboard has two tablet-style screens: one for the instrument cluster and the second the infotainment display.

Lower in the dash is a third display strip that looks like a light beam but can show different images, such as a woodland or a lava-lamp-like array.

On the centre console are just two buttons: one being for the hazard warning lights and the second likely the push button to start and stop the car.

The Sion also features moss integrated into the dashboard to naturally filter out dust particles and regulate the humidity inside the cabin.

The brand says the trim and interior surfaces will be available in different colours – though the choice for the exterior might be a little more limited by the fact the bodywork is covered in sun-soaking panels.

The car maker says these panels will ‘enable self-sufficiency on short journeys’.

The 54kWh battery alone should provide a range of 190 miles in total. The extra energy gathered by the panels when the car is parked outside or being driven should add around 70 miles of range per week – taking the weekly average to 152 miles of single-charge driving distance. 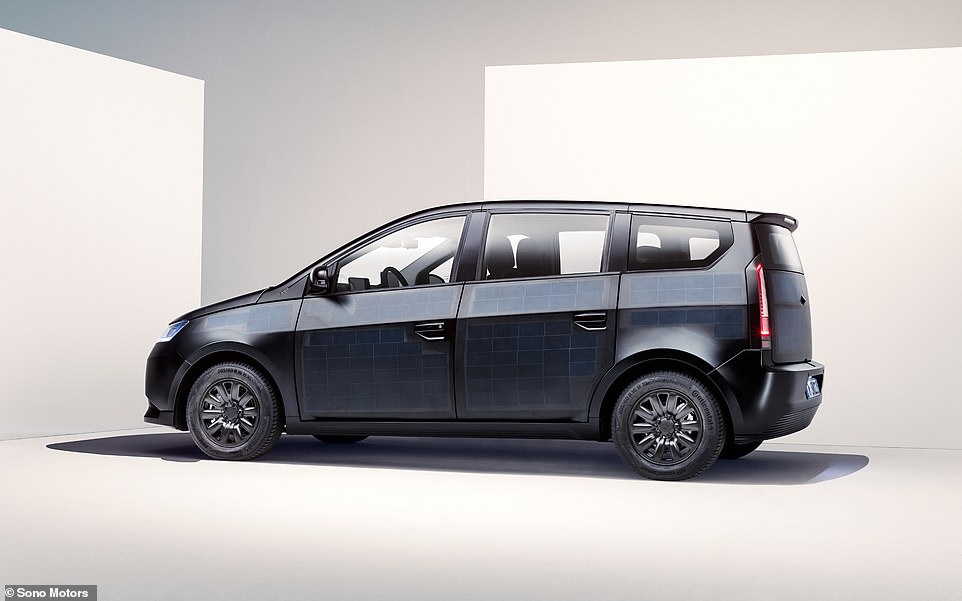 Every external panel of the car has solar panels installed in them apart from the front and rear bumpers, with the roof totally covered in cells 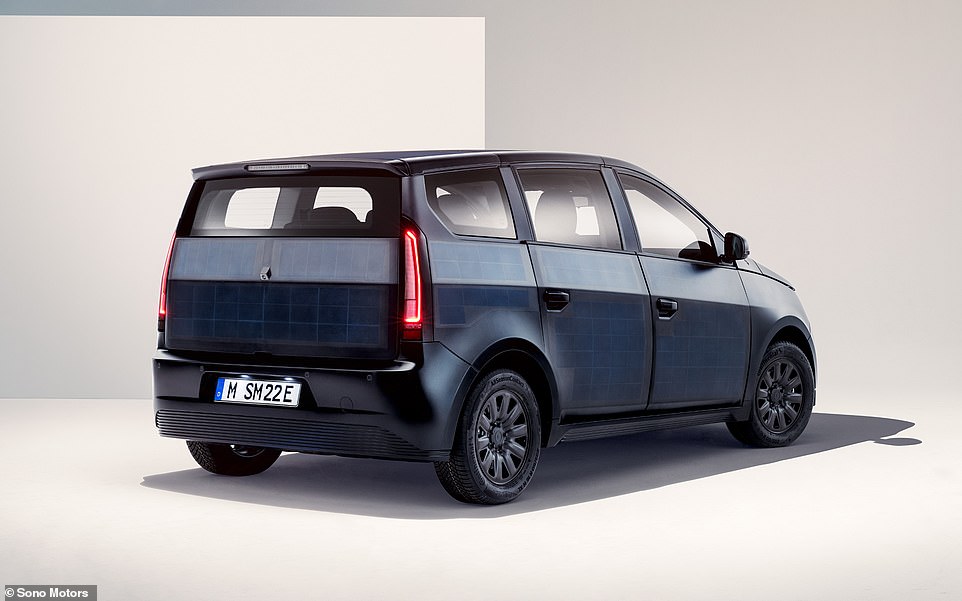 Sono Motors has been developing the Sion since 2017. This is how the production-ready version will look, with redesigned bodywork, fewer panel gaps, revised door handles and a new rear end design including a camera mounted in the boot lid

The energy generated from the sun can also be sold back to the grid, with the car featuring bidirectional charging.

This means the car can act as a ‘sustainable powerplant on wheels’ to power your electronic devices, or can supply green energy back to the grid at peak times when the vehicle isn’t in use, generating additional funds for the owner.

Based on the average mileage of commuters in German cities, Sono Motors estimates that users will need to charge the Sion up to four times less than a conventional electric car of the same vehicle class with a similar battery size.

The battery allows for a maximum charging capacity of up to 75kW via a DC charger, or 11 kW if you only have access to AC charging. 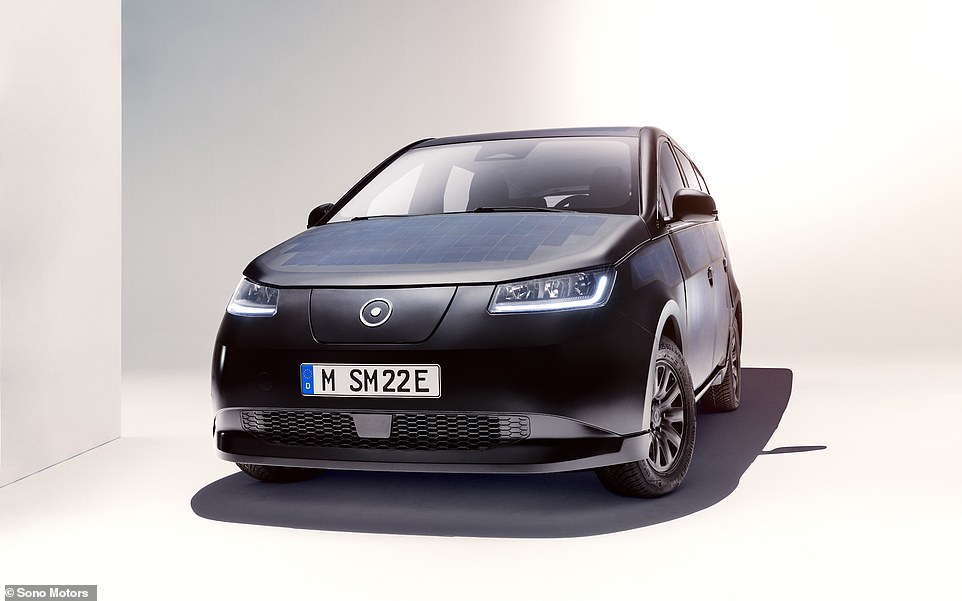 The 54kWh battery provides a claimed range of 190 miles. Extra energy gathered by the panels when the car is parked outside and being driven should add around 70 miles of range per week – taking the weekly average to 152 miles 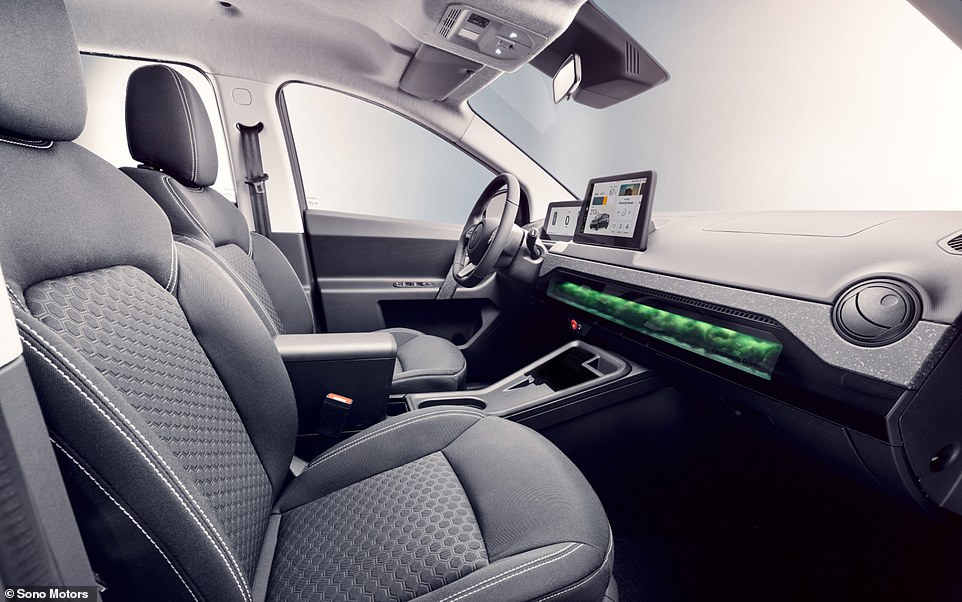 The interior has been redesigned with a new dashboard layout, upgraded seats and more storage compartments. Sono Motors says it has already received over 19,000 customer expressions of interest, each putting down a deposit to reserve one of the cars once production starts in Finland in the second half of 2023

The brand says the car is already being tested on the road and, in the next months, will undergo ‘uncompromising practical tests under extreme conditions in both Europe and the US’.

This includes crash tests to ensure the car is passed fit to be sold in all countries, as well as testing in different climates to optimise the solar technology and ensure its safety in extreme conditions.

An extensive test programme on track and public roads will also help to refine the vehicle’s driving dynamics.

The brand says it has generated plenty of interest in the Sion. In fact, as of 1 July 2022 it had over 19,000 ‘active private reservations’ for the car.

If all reservations do turn into purchases, the start-up is in-line to sell €415million (£347million) worth of cars.

‘At an estimated net sales price point of just €25,126, the Sion is expected to have one of the lowest TCOs (total cost of ownership) in the medium-size segment since the proprietary solar technology considerably reduces the necessity to charge the vehicle,’ the company said.

Production is expected to begin in the second half of 2023 in Finland under a partnership deal with Valmet Automotive. with German customers taking delivery of the first models off the assembly line.

Sono Motors, which was only founded in 2016, says it is aiming to produce approximately 257,000 Sion vehicles within seven years.

Improving the customer experience with virtual and augmented reality